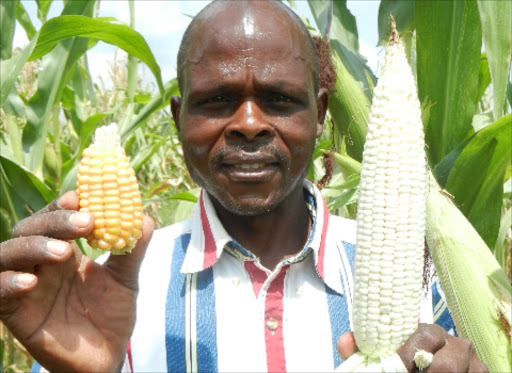 Striga or witch weed remains the biggest threat to food security in western Kenya, and to make matters worse, the witch weed is now spreading to highland areas like Kisii and Nyamira counties, according to experts.

Caleb Adede, the project officer of African Agricultural Technology Foundation (AATF) however says all is not lost following the introduction of maize varieties resistant to the lethal weed.

“Striga weed is prevalent in Busia, Kisumu, Siaya, Kakamega, Homa Bay, Migori, and Bungoma counties. Farmers lose up to 90 per cent of the crop. However, with the introduction of new technologies, the trend will be reversed,” says Adede.

“The weed survives by syphoning off water and nutrients from the crops for it’s own growth and causes serious damage to host crops,” he adds.

The introduction Imazapry Resistant (IR) technology will save farmers from making further losses. Farmers in Western Kenya can get the maize variety at a cost of Sh400 per 2kg bag.

“IR maize is also known by the trade name StriAway by maize seed companies, agro dealers and farmers. This twin technology combines the use of herbicide resistant maize seed and innovative seed coating. The coating kills the weed and not the crop. The pricing is a bit high but we hope it will go down when Kenya Seed and Western Seed avail their varieties in the market. Right now we only have Fresco FRC425 IR in the market,” he notes.

Maurice Owino Onyango, the chairman of Akata Groundnuts Farmers Self Help Group is looking forward to a bumper harvest.

Onyango says he learnt about IR maize during a farmer’s field day and as a group, we decided to plant and I’m looking forward to a huge harvest.

He adds that most of the farmers in the area gave up on planting staples like maize, sorghum and millet which are worst affected by Striga.

“We started venturing into groundnuts and cassava but since the introduction of a maize variety which is tolerant to Striga, we are trooping back to maize growing,” he noted.

Onyango says most of the 35 members of the group have been planting local variety of maize known as Nyamula but now they have no reason not to embrace the IR or StrAway maize variety.

Thaddeus Oriko another farmer who has adopted IR maize is all smiles.

“We barely used to get two sacks per acre but now we are hoping to get at least eight bags. There is no reverse gear, you can see the difference between IR maize and our local varieties is like day and night,” noted the farmer.

He says since the agriculture service has been devolved to counties, the County government of Homa Bay should sensitize farmers on the need to plant varieties which are resistant or tolerant to Striga.

According to Eric Odhiambo, the principal of Homa Bay Agriculture Training Center, Striga is a major menace in the area.

“Striga is a serious issue here because it can reduce production to between 80 to 100 percent and needs an integrated way to address,” he says. Farmers, he adds, should use a number of technologies including push pull, use of farmyard manure, crop rotation and varieties which are resistant to the weed.

“For us to be food secure, Striga weed should be addressed. Adaptation to new technologies takes time but we must do it because you reckon there is a big difference when you compare local and IR varieties. Farmers should reject myths that their farms are bewitched and embrace new technologies,” he notes.

Homa Bay County executive committee member for Agriculture, Livestock and Fisheries Dr David Okeyo says the county is seeking support from other experts in fighting the weed which has become a huge threat to agricultural activities.

“We must win the war against this stubborn weed. As a government, we have rolled out a campaign to fight the weed. We are educating the farmers to use new technologies and use certified seeds to fight the Striga. We have also been telling the farmers to observe simple but important hygiene in dealing with the Striga weed. For example, they should not uproot and dump the weed on the road or take it home with the crop because this is a sure way of spreading the seeds,” he added in a statement.

AATF is participating in a public private partnership to deploy the IR maize technology to small holder farmers in sub-Sahara Africa and to ensure long term use and benefits to them.