A strange object turns up in Jiji Ndogo

It feeds suspicions of rigging after peaceful election 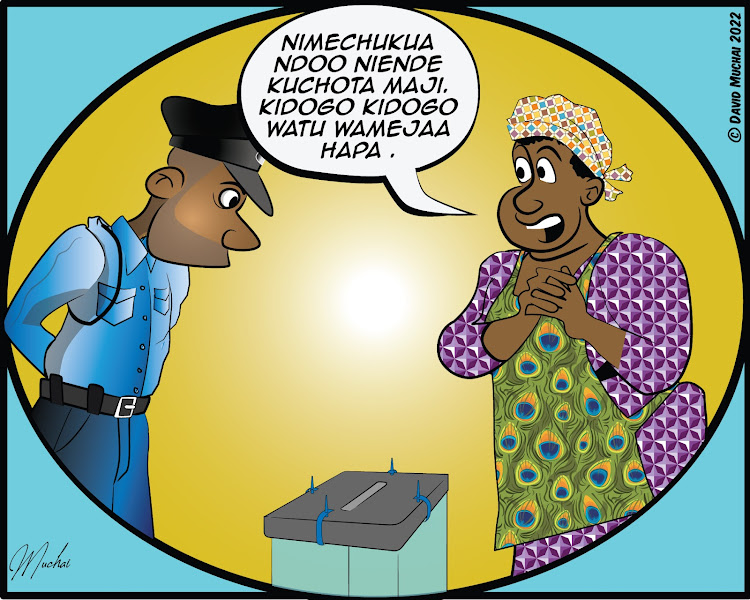 As election time came upon us, I kept wondering how come we were not getting any pertinent instructions. The IEBC had sent no one to ascertain the integrity of our polling station, and our bosses had said nothing about the necessary security, which would’ve been right up our alley.

The message that came a week before the elections was most surprising. Since Sgt Sophia always calls dibs on opening the mail, I read the bad news on her face before she uttered it.

“We’re to be supplemental election security personnel in Jiji Kubwa.”

“Jiji Kubwa?” I spat. “Why do we have to go to that blasted place?”

“There’s no polling station in Jiji Ndogo,” Inspector Tembo, our boss, said. “Everyone casts their vote at Jiji Kubwa.”

Now, you’ve probably never heard me mention Jiji Kubwa, and for a good reason. Our neighbouring village is everything you love to hate. It’s the lastborn that’s always snitching on you. It’s the chick flick your girlfriend takes you to see and expects you to cry. It’s that tattoo of a mighty eagle you got when you were 21 and now that you’re 50, it looks like a crippled chicken. Jiji Kubwa is the date who won’t get off their phone during dinner, or worse, takes a picture of the food first before eating it. It’s the…

I could go on, but there’s that matter of a strange object that shows up in Jiji Ndogo. Come election day, we all troop to Jiji Kubwa. God! I hate this place.

“Just because a road made of real tarmac passes across the village,” I say, “they have to walk with their noses in the air?”

“I think the stench of garbage is the reason they do that,” Sophia says.

And she’s right. Jiji Ndogo has the freshest air I’ve had the privilege to inhale, unless you walk by Mr Sonko’s place at night. He’s the richest man in Jiji Ndogo, and when his countless cows chew cud and begin to fart, you could explode from the methane if you so much as lit a cigarette. Also, while there is a large pile of garbage in this one-tarmac-road town, in Jiji Ndogo we dig pits for our refuse and feed organic waste to the animals. Don’t get me wrong. I’m not tooting our horn here, I’m blaring the loudest trumpet.

The voting runs smoothly (apart from a few shenanigans I’ll get to at a later time), and people walk the five kilometres home safely.

The following day, we are summoned to a large gathering outside Mama Denno’s house. We arrive to see her holding up a sizeable see-through bin, its lid fastened with cable ties.

“It’s empty,” declares Sophia and turns to Mama Denno. “Do you know who might have brought it?”

Denno arrives, and although it’s barely nine in the morning, he’s as high as a kite. “Wasee, mnadu nini kwa keja ya mine?”

Sophia shows him the box. “Do you know anything about this?”