I’m a toothless lion in a cage 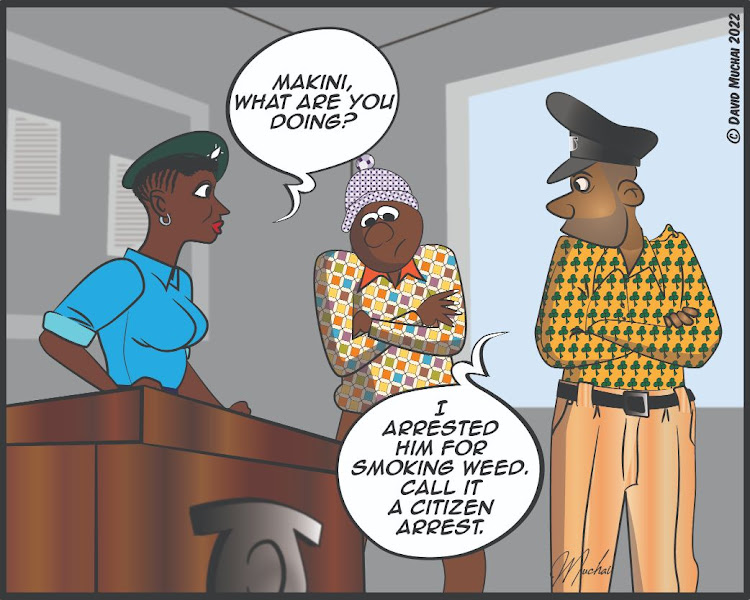 My dear reader, it truly sucks being a cop without his gun and badge. It’s akin to an attempt at being a farmer without a jembe. But at least as a botched farmer, the crops don’t laugh at you in your face.

In case you’re in the dark, I’m on administrative leave because I’m under investigation since my stolen gun was used in the murder of a Jiji Ndogo citizen.

As I walk home from the market, toting my vegetables and a small bag of unga, I chance upon Kevo, our regular small-time miscreant, and his buddies, chilling under a tree, sharing a joint.

As is often the case, I expect them to beat it for the hills as soon as they lay eyes on me. But do they? Oh, no. In fact, Kevo does the one thing I would never in a million years have thought him capable of.

“Has that weed totally eroded your brain?” I ask. “You can’t even speak clearly.”

“I didn’t understand half of whatever you said either, but you guys do remember I’m a policeman, right? Or has that fact disappeared within the smog in your corrupted brains?”

They laugh once again, this time more contemptuously.

Oblivious that I no longer carry the items that bestow state authority upon me, I jerk Kevo and Denno up by their belts.

“What does it look like I’m doing? I’m arresting you for possession of illegal narcotics.”

“Oh, I see the prospect of arrest has taken you out of Oyole. And as to your question, I’m making a citizen’s arrest. Move!”

“What did you say?” Now I’m getting annoyed.

Now I’m definitely mad. I haul Kevo and Denno—and my, ahem, mboga na unga—towards the Police Post. “Once I have you both locked in the cell, we’ll see who gets the last laugh.”

“Shut up! Both of you,” I scream. “I’m having a headache just listening to you.”

I’m all too glad when I get them to the Police Post.

“Makini, what are you doing?” Sgt Sophia promptly asks.

“I arrested these two for smoking weed.”

“Shut up, Kevo.” To Sophia I say, “Can you just book them? Call it a citizen arrest.”

Sophia frisks them and finds rolls of marijuana in their pockets. “Good enough. Put them in the cell.”

Once I’m done, I turn to leave, but she calls me back.

How couples struggle with division of labour