Out of jail but still in the woods 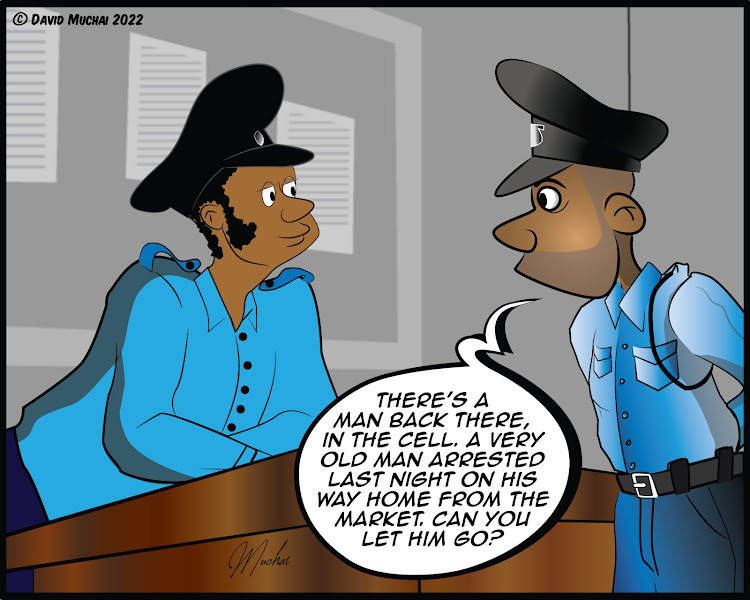 Finally, I’m out of jail on bond, following a week behind bars for the suspicion of murder or conspiracy to commit murder.

It all depends on the conclusion of the investigation into the culprit behind the slaying of Mr McOnyango, an old reclusive man in Jiji Ndogo, shot using my police-service pistol. I didn’t do it, just so you know, but I could scream my innocence until I am hoarse and still end up in prison if the actual killer isn’t caught.

My lawyer Fudu and my colleague Sgt Sophia are waiting for me outside the Kericho police station.

“You do understand your release is conditional,” Fudu says. “You’re to stay at Jiji Ndogo until the conclusion of this matter. Whichever way it goes, you’ll still be a witness since you have to explain how your gun ended up in the hands of a killer.”

And with that, the lawyer is off to attend to another unfortunate lawbreaker.

“How does it feel being a crook?” Sophia asks.

“Okay, a suspected crook, then?”

“You’re having a blast with this, aren’t you?”

“Actually, I envy you. Now you know how it is on the other side. I’ve never spent a night in a cell.”

I put on airs befitting a Mafia boss. “It was no biggie. All you have to do is show the others who’s the boss. You wouldn’t survive a day in there.”

She laughs so hard I’m embarrassed. “Me? I heard you lied you were a murderer so they’d fear you.”

“A serial killer, to be precise. In jail, the biggest dog gets the bone, if you know what I mean.”

“Not yet. I have a small matter to sort out back in there.”

“You’ve got beef with some bad guy?”

She’s being frivolous, I can tell. “You can come with me if you want.”

Back inside the station, I ask for the commanding officer.

The female sergeant at the OB looks at me as if I just requested audience with the President. “He’s not around. What can I do for you?”

“Can I see whoever is in charge?”

I climb down a few notches. “I’m asking this as a favour. One officer to another.”

“Makini, you just left the cells not even 10 minutes ago. For now, you’re a murder suspect, not a police officer.”

“Hey!” I step between them before things get ugly. “There’s a man back there, in the cell. A very old man arrested last night on his way home from the market,” I say.

“I believe you have his one onion, two small tomatoes and half a kilo of unga in the evidence locker. His family slept hungry because their only breadwinner was arrested for loitering. That’s not fair.”

“Hold on one second.” She phones someone.

Five minutes later, a tall man in a rumpled suit enters the waiting area. “Sgt Makini?” He shakes our hands. “I understand you have questions about Mr Kibinjo?”

“You shouldn’t believe everything a perp tells you. He has no family left. Two days ago, Mr Kibinjo killed his wife of 40 years.”