Everyone swears their innocence, but life can be cruel

• There is laughter galore as inmates make light of their situations 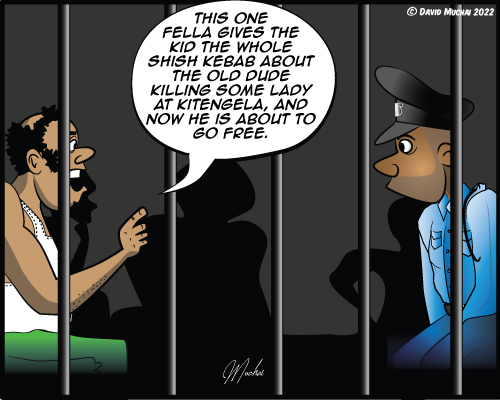 “You think that’s messed up? Check this out.” The speaker is Njoroge, an inmate at Kericho police station on his way back to a maximum security prison on robbery charges.

“I was doing 10 long ones in Kamiti, right? This guy, I forget his name, but he was doing life for murder and kept saying he was innocent and whatnot. Nobody listens to such crock. Everyone in prison is innocent.” He gets some laughs from the other inmates.

“Anyway, after more than 30 years in the can, the guy is now like 70 years old. DNA evidence comes back proving he didn’t commit the murder. The bloody sucker was innocent all along.”

In case you’re not in the loop and you’re wondering what I, Sgt Makini of the Kenya Police, posted at Jiji Ndogo police post, is doing listening to prison tales at a police station, I’ll bring you up to date.

Several weeks ago, a man in Jiji Ndogo was found shot dead. Ballistic evidence showed he was shot with a police-issue handgun. My official pistol, to be precise, which is why I’m slowly rotting away in a cell as my colleagues figure out how I got myself in such a cockamamie predicament.

“Now, here’s the messed-up part,” Njoroge continues. “The day before the man is to be released, this 25-year-old kid comes in for shoplifting charges. Third strike, so the judge gave him six months with the big boys at Kamiti to scare sense into him.

“Of course, the old man’s release is all the talk in the prison. Some jailbirds even hoping their cases might also be overturned. And then pigs will fly.” More bouts of laughter.

“So, the kid asks his cellmates what the buzz is all about. This one fella gives the kid the whole shish kebab about the old dude killing some lady at Kitengela way back, and now he is about to go free.”

“But he was not going free,” says Wambua, who is facing domestic battery charges for slapping his wife over an argument about his drinking. “You said he was innocent.”

“Well,” Njoroge looks around, a sly smile on his lips. “For whatever reason, the cellmate omits to mention the part about the DNA evidence. Suddenly, the kid goes berserk, yelling that murderers should rot in jail and whatnot. Maybe this is why the seasoned old codger left out some details, you know, to get a rise out of the kid. You should’ve seen how entertained they were by his antics.”

“Your story sucks!” declares an inmate whose name I didn’t get. He’s the one who had spoken before Njoroge. “What’s messed up about a kid acting up in jail? And how is that more jerked up than my story about the prisoner who hid a phone up his bum during inspection and the phone rang?”

It’s a funny story, all right, and we’re back laughing again when Njoroge raises his hand.

“Patience, my child, patience. I’m not done. Somehow, the shoplifting kid convinces the guards to let him visit the old man. Some bologna about learning from the old bloke or something like that. What harm would that do, right?

“Next thing the guards hear, the old man is screaming his head off. They open the cell to find the young man beating the crap out of the pensioner. Turns out, the boy is the son of the murdered lady. For the attack, he gets six more years added to his sentence and six months later, old man is free, but he dies from the injuries. Messed-up, no?”

Jail is no place for a policeman
by David Muchai LLB Writer, Author & Content Creator at XLNC Media Inc
Entertainment
29 May 2022 - 06:00