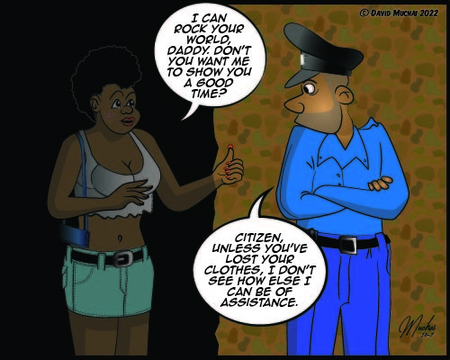 Fatma Nono, the proprietor of Kula Ulipe Hotel, summons me urgently to her establishment. I’m sweating beads of steel by the time I get there. Here at Jiji Ndogo Police Post, we pride ourselves at actual Utumishi kwa wote.

“What’s up, Fatma? Someone not pay their bill?”

“No. A stupid dog made away with a kilo of my pilau meat.”

“Excuse you? I’m reporting a theft to you. Are you going to do something about it or stand there gawking?”

“Did I stammer, Mr Policeman? It’s Matendo’s dog. You can arrest him, too, if you prefer human criminals.”

Yes, my dear reader. I’m running after a thieving dog. Thing about dogs is, they tend to run faster than humans and fit into crevices too small even for a dog. Also, it’s so dark I can barely see my own hands. It’s safe to say I was outsmarted before the chase began.

On my way back, tired and dejected, I pass between two shacks and hear, “Psst! Psst!”

I investigate further, only to be manhandled by a woman who’s almost naked (in a bra and a skirt barely wider than a belt), caked up in makeup thicker than that of a Japanese Kabuki artist. If you’ve ever watched a movie that begins with the line, “You killed my father,” then you know what I’m talking about.

She runs a finger down my cheek, all the while licking her lips. “The question is, can I do you?”

“I can rock your world, daddy.”

“Lady, my world is rocky enough. I could build two mansions and still have some leftover rocks for a wall.”

She rubs her naked thigh against mine. “Don’t you want me to show you a good time?”

“Citizen, unless you’ve lost your clothes, I don’t see how else I can be of assistance. Have you, by any chance, seen a dog run by carrying a kilo of meat in its mouth?”

She pulls away, looking annoyed. “What kind of man are you? Do you want to have sex or what? It’s only five hundred.”

I whip out my cuffs. “Put your hands behind your back. You’re under arrest for prostitution and intent to corrupt an officer of the law.”

“Damn! There are cops in this hellhole?”

“Three of them, as a matter of fact, and none of us need rocks in our world.”

“What the fudge, Makini,” Sgt Sophia says. “What did she do and did you have to undress her?”

“She’s a prostitute and she’s fully dressed for work. Book her for solicitation.”

The woman leers at Sophia. “You’ve got a killer body, sis. What do they pay you here? You could make a month’s salary in a day, if you know what I mean.”

“I know what you mean, and was it not for the law, I’d personally issue you condoms and arrest johns who don’t pay for your services.”

My jaw flops against my chest. “Sgt Sophia, you support prostitution?”

“It’s not called the world’s oldest profession for nothing. Besides, how would you categorise a side chick who gets money from a sponsor for her services? Or the woman who won’t put out until she gets new shoes or handbag? Same difference to me.”

“That’s what I’m talking about,” the woman says.

She and Sophia slap high fives. “Unfortunately, for now, sis, I’m arresting you for solicitation.”