Jealousy is stronger than nuclear bombs 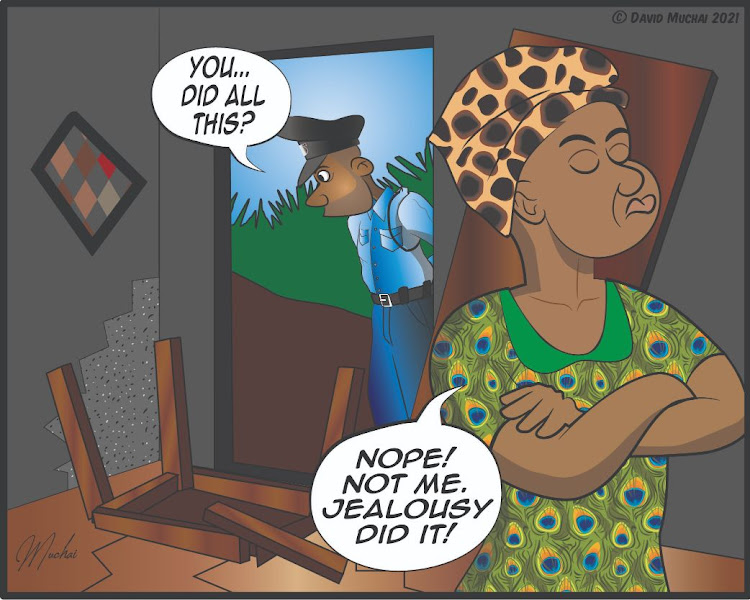 Before Mama Nyarinda visited the police post, I used to think nuclear bombs were the strongest forces on Earth. Boy, was I wrong.

Jealousy, now I know, trumps the super bomb Moab hands down. Mama Nyarinda, a tiny woman weighing less than a bag of feathers, comes to the office, her face redder than a Mt Elgon tomato, her poor husband in tow.

Soon as she’s able to placate her breathing (seems like she’s fuming from the ears, too), she says, “Askari, kuna defence ya temporary insanity mtu akichezwa, right?”

“Officer,” Baba Nyarinda chimes in, sweet as pecan pie, “I made a call to Customer Service three weeks ago for help with my phone. They were just apologising.”

“Yeah?” Mama Nyarinda swipes a finger across the phone screen. “Na hii text ingine from ‘Cucu wa Karatina’. I’ll read it for you. ‘Sweetheart, I got home safe’.”

“Ngooonja! There’s more.” She swipes up. “Cucu anasema, ‘Unfortunately, I think I forgot the red undies you bought me in your bathroom.” Nani hununulia nyanyake underwear?”

“Tsk, tsk, tsk.” Baba Nyarinda shakes his head. “That’s a typo! She meant to say ‘the red hankies’. I bought her a set of handkerchiefs. She’s partial to the colour red.”

“I’m still stuck at how good his grandma’s English grammar is,” I say.

“Oh my God!” Her hand flies to her mouth. “Hata sikuwa nimefikiria hivo!”

Baba Nyarinda makes a face. “Afande, who’s side are you on?”

“It could be a duck-billed platypus with a throat infection.”

I can’t help but join Baba Nyarinda in laughter, but Mama Nyarinda isn’t in the mood for cheap humour. “Typical wanaume! I knew sitapata a fair hearing.”

“My apologies, ma’am.” I clear my throat. “But it seems, as misguided as you might be, you’re the one suing your husband, not the other way round. Why do you need an insanity defence?”

“Go on, honey,” Baba Nyarinda prompts. “Tell him why you need a good lawyer and I need a good babysitter for Nyarinda and our other kids.”

“Well, Askari…” Suddenly she looks meek and nothing like the woman who had trooped into the Post. “After niliona message ya ‘Kimani kya Nyama’ saying ‘My thighs are aching for you,’ nili-lose my mind and… broke a few things.”

Seeking further evidence, I accompany the couple home. “A few things” is a gross understatement. The house looks like a tornado passed through it, sparing only the walls and destroying everything inside.