I’m a celebrity for a bullet in my rear 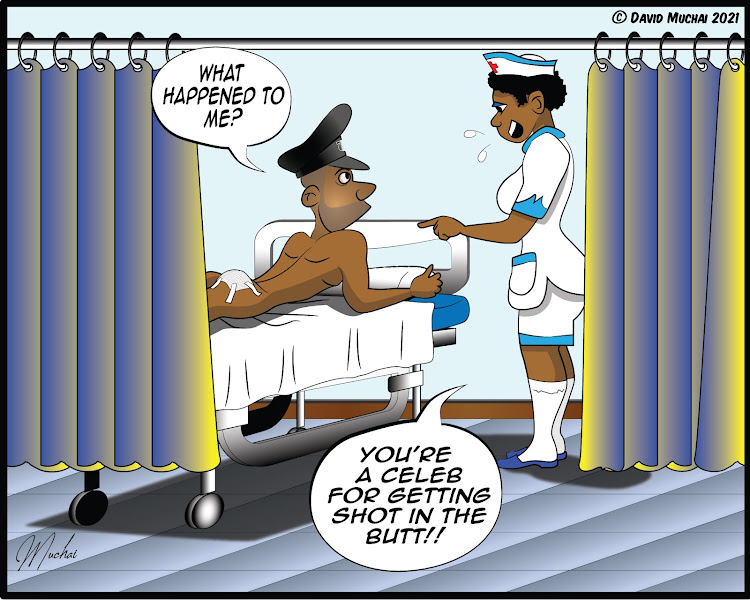 In case you’re late to the party, I got shot in the butt. Yes, a convict on the lam ended up hiding in Jiji Ndogo, and once I confronted him… Well, you can guess the rest. Now recuperating at Kericho Level 5 Hospital, I can frankly say that a bullet in the ass is a real pain in the butt.

While being shot wasn’t too painful, the aftermath hurts like hell. And the worst of it is the treatment. The swabs, the dubs, the poking, the prodding… One nurse rips off the bandage as if I’m in a beauty spa getting my buttock hairs waxed.

“Whatever did I do to your brother?” I scream.

My yelps attract another nurse who rushes in, pulls the other woman off of me. “Katrina, unafanya nini hapa? The Psych Ward is in the other building!”

The nurse twirls a finger pointed at her temple. “She killed her husband and three children because God told her they were possessed by a devil called Kimunya.”

“Why is the devil called Kimunya?”

“We only treat them, officer. We don’t try to make sense of their rationale.” She makes a face. “Ouch! She did a number on your tooshie.”

“You can say buttock. I’m not five. Shouldn’t psych patients be locked up?”

“Katrina has picked every lock we have. Besides, you’re a celebrity, you know. She’s only the lucky fan who actually got to you.”

“You don’t get many patients who are police officers, I presume?”

“Oh, no. Injured officers come here all the time, just none shot in the tooshie — I mean, the buttocks.” She smiles.

“My injury amuses you?”

“Not really. I just recalled the last policeman to come in with an invasive gluteal wound.”

“I assume that’s medical speak for being shot in the ass?”

“He reported that a suspect had struggled to grab his gun, which fired, the bullet going through the top of his gluteus maximus and out the bottom.”

“Turns out he had been trying to slip his gun into his back pocket and shot himself.”

I smile in spite of myself. “Yeah, that’s kinda funny.”

“There’s a rumour circulating that you also shot yourself to avoid facing the convict.”

I sit up, sending hot pain radiating up my spine. “Who said that!”

Just then, a doctor leads a giggling group of young men and women into the room. “And finally here is our famous patient Officer Makini, who presents with a .380 caliber gunshot wound to his buttocks,” he says.

“I must say, you’re such a lucky bunch to witness firsthand the effects of non-fatal invasive gluteal trauma.” He smiles at me. “How’re you today, Mr Makini?”

“Better until I became a lab specimen.”

“Just basic training routine, sir. These are the medical students who will be caring for your future vulnus sclopetariums.”

“That’s right, Darius.” The doctor turns to me. “Now, if you don’t mind, Officer Makini, please roll over and pucker up.”

The students laugh. I fume visibly.

“I’m sorry, sir,” says the doctor. “Just a wee bit of hospital humour. You know what they say about laughter…”

“Forget what they say about laughter. Just pray that none of you commit a crime in Jiji Ndogo.”

Of course, that only elicits more mirth.