• Sophia finds herself in an awkward conversation with her wannabe lover 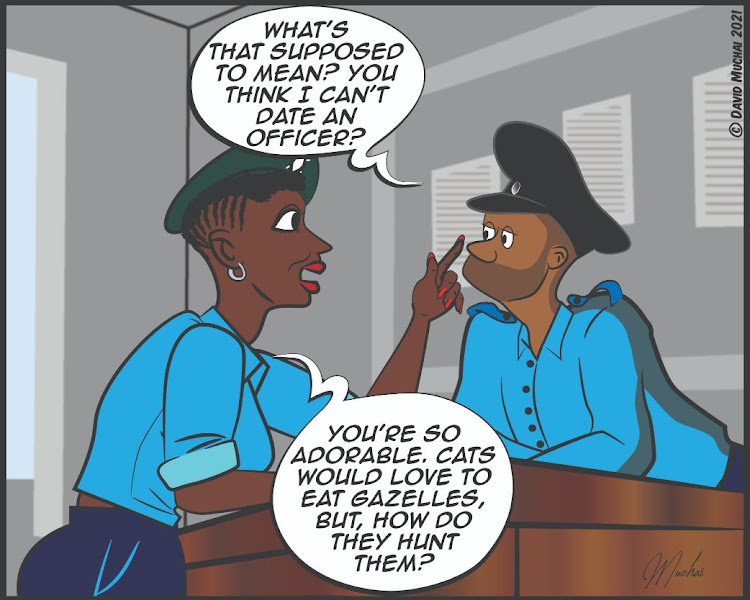 Just when I thought things were getting cozy between Sophia and I, new orders roll down and rain on my parade. Jiji Ndogo is as far away from civilisation as one can get without falling off the grid. News trickles down to us but somehow, orders come rushing in.

“Have you seen this new order?” I ask Sophia.

“If you mean the dating rules, I got the directive before you were done with your breakfast.”

“It doesn’t make sense.” Angrily, I throw down the paper with the orders. It lets me down by floating slowly to the table. “Two cops can’t date now?”

Sophia shoots me a look sharp as daggers.

“What’s that supposed to mean? You think I can’t date an officer?”

Sophia walks up and stands so close I can feel the heat radiating off her body, smell her perfume. Something with peppermint in it.

“Because they love mouse meat?”

“You’re so adorable.” She touches my nose with a finger. “In case you didn’t know, cats would love to eat gazelles, but, you know, there’s all that hunting and killing stuff involved.”

“Let me get this straight. I’m the cat and you’re the gazelle?”

“Oh no, Makini. What would give you that idea?” She walks back behind the desk. “In this analogy, I’m an elephant.”

“Whatever, Sophia. I still think it’s not fair. Remember that incident of the cop in the city who was killed by her boyfriend? He wasn’t a fellow officer. What about that?”

“You just don’t get it, do you? There’s more than romance or jealousy at play here. Some junior female officers are coerced or duped into dating their seniors with fake promises of advancing through the ranks.”

“I get that. I guess we’ll just have to keep it clandestine then.”

“I meant to say those who do it. Hey, have you heard from Inspector Tembo? It’s been three days since he escorted his wife to the city and he hasn’t come back.”

“He’ll be back. I think he needed a break from this village.”

And then, like a bullet train, it rams into me.

“Since he arrived here, all he’s wanted to do is leave. He hated this assignment with all his being. Once he gets to the city, he’ll find an excuse not to come back.”

“It’s not that simple, but nothing is impossible. All he has to do is put in a request and wait for the paperwork to do its rounds. But he has to provide concrete reasons for making such a move.”

“No, they’ll send someone else.” She laughs. “Hopefully a ball-buster.”

“What? You don’t think we work hard enough around here?”

“I know you do, Makini. But do you listen as well? I have to go on patrol. Later, fellow officer.”

About ten minutes after she’s gone, I get what she meant.

Nothing is impossible. All he has to do is put in a request and wait for the paperwork to do its rounds. But he has to provide concrete reasons for making such a move.

Should colleagues be allowed to get romantically involved?
by David Muchai LLB Writer, Author & Content Creator at XLNC Media Inc
Entertainment
09 May 2021 - 06:00