This is God’s sign that our church is not working right, says 'prophet' 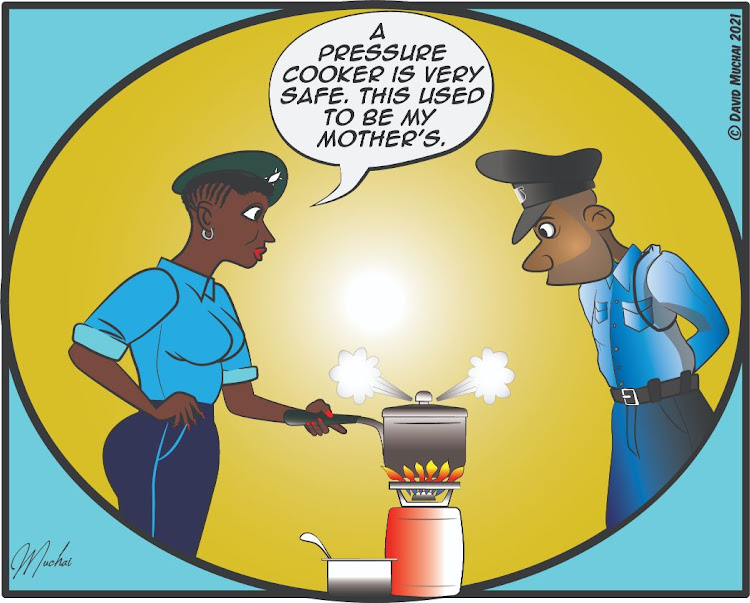 Sgt Sophia and I are at the Police Post, discussing workplace culinary.

“Because it eliminates long meal breaks,” she says. “Increases efficiency.”

I pick up a pressure cooker.

“Where did you get this? It looks older than my grandma.”

She snatches it from my hand.

“Pressure cookers are safe and last for very long. I got this from my mother.”

She places the pot on the stove, fills it halfway with water and dumps the dengus.

She points at me with a mwiko.

“You want to see how well I can handle a gun?”

I take the mwiko and put it away as she fixes the cooker’s lid.

“All I’m saying is, at this rate, who’s gonna marry you?”

We turn towards the voice. A man is at the door.

“Tell them I should be the church leader,” the man says, pointing outside.

Sophia and I walk outside to find a group of people arguing passionately.

“What can we do for you?” Sophia asks. No one pays her any attention.

“Quiet!” I shout and whistle. They calm down. “What’s the problem here?”

“My name is Prophet Reginald Tunga,” says the man who had entered the office.

“He’s not a prophet!” shouts a lady in the crowd.

“That’s what they said about Elijah. This new church closure is not just about Covid-19. No. This is God’s sign that our church is not working right.”

“All churches were closed, Reginald,” he says. “Not just ours.”

“Maybe that’s what is supposed to happen so people can open their eyes and see,” says Reginald. “God has shown me a prophecy.”

“You can’t be a prophet,” another man says. “Your name is Reginald. That’s not even a Bible name. Ever heard of Prophet Reginald in the Bible?”

They begin chattering at once. I raise my arm to calm them.

“Reginald,” I ask, “exactly what are you trying to say?”

“We have all sinned and fallen short of the glory—”

“Okay.” The prophet faces the others. “Look, the body is the temple of our Lord. So, wherever we are, the temple is with us and so is the Lord. Therefore, my vision is that in the future, there shall be no churches, at least not the physical ones. Only the temples will remain. But we still need to pray and praise, right?”

There is reluctant agreement scattered around.

“And we shall do that, sayeth the Lord. From my house.”

“You can’t congregate in your house either,” Sophia says.

“Not physically.” Reginald touches his heart. “But in here. From next Sunday, I shall be conducting the church from my house. I’ll broadcast it to every phone in Jiji Ndogo.”

“No way,” said a congregant. “Whoever heard of church by phone? And who’s gonna buy the credit?”

“You don’t need credit to receive a call, Kimama,” a young man says.

“Hey!” Sophia shouts. “No need to call each other names.”

“So, are we in agreement?” I ask. “Church from Reginald’s house?”

“Not in a million years,” Kimama says. “There would have to be a sign from God for that to happen.”

“Okay. Why don’t you all go home and wait for—”

Suddenly there is a loud explosion.

“And the Lord has spoken,” declares Reginald.

His fellow congregants escort him away.

“I told you,” says Sophia, laughing.