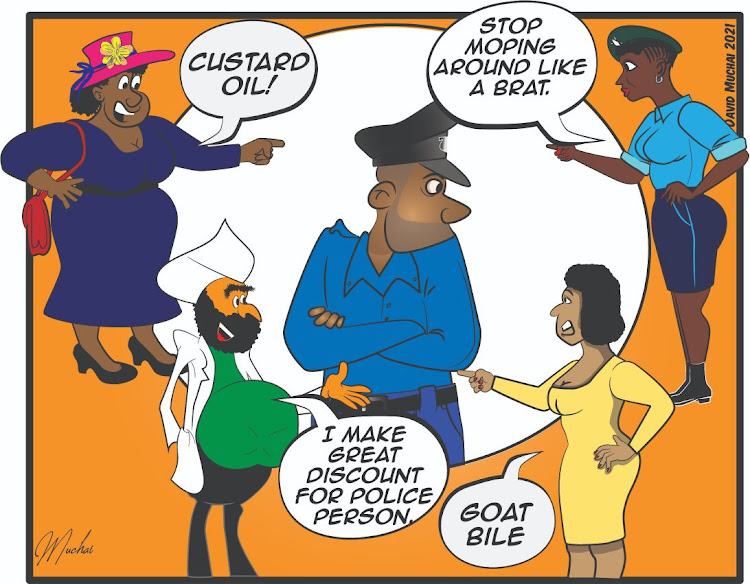 Dear reader, if you know me well by now, you’ll know I have a checkered history with women. I’ve only had one true girlfriend in my life and that didn’t end well. When I came to Jiji Ndogo, I hooked up with Millicent who then left me for her former boyfriend. Next came Sophia with whom I have a love/hate relationship—I love her, she hates me.

I’m in bed recuperating after being attacked by Kimondo, the rape perp I arrested last evening, and for the first time in my life, three women are fussing over me. First, Mrs Tembo.

“You poor boy.” She smothers me against her ample bossom. “Here, drink this.”

It’s green goo in a humongous glass. One sip and I’m ready to throw up last Christmas’ chicken. I spit it out.

“STOP!” comes a voice at the door. “Are you trying to cure him, or scare the disease out of his body?”

“Who are you?” asks Mrs Tembo.

“The person saving the patient from custard-induced diarrhoea.” Millicent replaces the green concoction with a steaming bowl. “Here. Try my mother’s chicken soup.”

“You took care of me once. I’m returning the favour. Drink up.”

She feeds me a spoonful of the soup. It tastes worse than Mrs Tembo’s gloop.

“This is not chicken soup!” I protest.

“It is. I only added a bit of muarobaini, goat bile, bitter leaf, gum arabica and my mom’s favourite, wormwood.”

“Son,” says Mrs Tembo, shaking her head, “you must have treated this girl very badly for her to feed you goat bile.”

I swing off the bed.

“Ladies,” I say, “thank you for caring but I’m okay. It’s just a few bruises. Not constipation or… whatever Millicent thinks requires goat bile.”

“Bruises? I was told you have something called IMAX.”

“No, Silly.” Millicent laughs. “That’s a movie theatre. He is suffering from ADHD. That’s why I got him the fish.”

“Stop!” It hurts when I exert myself, but I have to stop this before it escalates. “I have no idea what both of you are talking about. I mean, what is ADHD?”

We all turn to the door to see Sergeant Sophia standing at attention.

“Of course, not. You’re just stupid. What you have now is PTSD.”

“PTSD!” Millicent slaps her forehead. “That’s what I heard.”

“Post-traumatic stress disorder,” Sophia explains. “It’s a mental health condition that's triggered by a terrifying event — either experiencing or witnessing it. Even people with Aids or Covid-19 can have it too. When too severe, one is advised to seek counselling.”

Dr Selitol, our resident chemist and know-it-all, walks in.

“Symptoms include flashbacks, nightmares, severe anxiety,” he says in a thick Indian accent, “as well as uncontrollable thoughts about bad event.” He holds up a large bag of medications. “I have the best cures only. And I make great discount for police person.”

“Everyone out!” Sophia shouts, pointing towards the door. She hands me my gun and ID. “What you need is to occupy your time. Come back to work and stop moping around like a brat.”

“Just say you missed me, Sophia.”

What to do if you have been raped
by David Muchai LLB Writer, Author & Content Creator at XLNC Media Inc
Entertainment
19 March 2021 - 09:55