Kimondo the rapist turns the tables on me 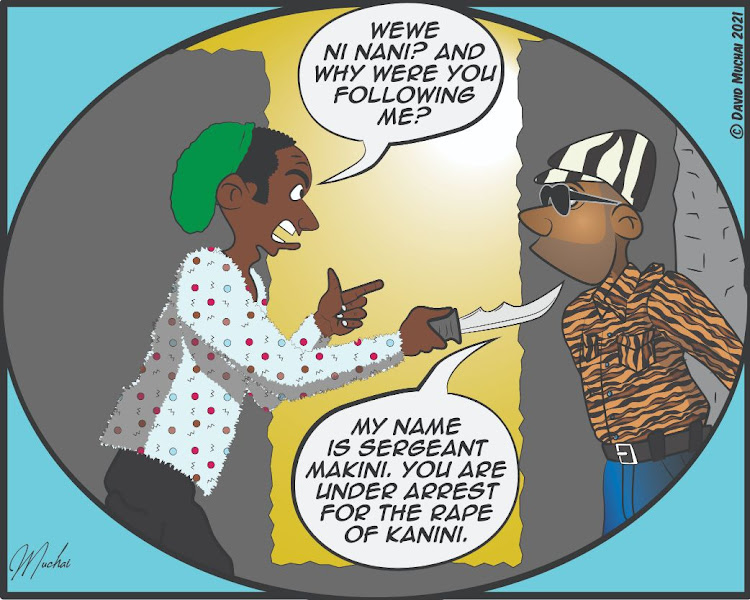 With a couple days of my leave to spare, I go after Kimondo, the man who assaulted my sister.

I expected Kimondo to resemble a cross between a mole-rat and a warthog. But he was a good-looking young man. Still, the minute I see him, I wanna strangle him with my bare hands.

I corner him coming from work and apply a karate chop to his neck. Like Van Damme does in movies. It doesn’t work in real life. Kimondo is merely annoyed as he turns and fists me in the jaw. For a moment, I’m convinced Jackie Chan hit me. I come to tied to a beam in an unfinished house. Soaked.

“It took basin tatu za maji to bring you around.” He thrusts a huge knife in my face. “Wewe ni nani? Why were you following me?”

“My name is Sgt Makini,” I state as a matter-of-fact. “Kimondo, you are under arrest for the rape of Kanini five years ago.”

“I’m so sad.” He offers his wrists, moping mockingly. “Arrest me, officer. I’m ready for the slammer.”

“You will rot in jail, Kimondo, if it’s the last thing I do.”

“Seems to me the last thing you’ll do is die, officer Mak...” He scrutinises my face. “Makini! Of course! Now, I remember you. You’re Kanini’s wimpy brother from primary school.”

I strain the restraints. They’re tight.

“Are you freaking kidding me? I took you out with one punch!”

“You like being in control, don’t you? That’s why you rape women. To feel like a man.”

I don’t see the second punch coming either. This one to my stomach. I throw up ugali and kienyeji.

I should chew my food more next time, I tell myself.

About to hit me again, Kimondo hesitates.

“You know something? I am tired of these little girls.” He paces up and down. “I need something better. A challenge. A bigger rush.”

“Fight you? I’m gonna kill you, wimp! I wanna see life escape out of your eyes.”

He rends my shirt to shreds, laughs openly.

“No wonder you’re such a wimp!” he bellows. “I could count the hairs on your chest.”

“Multiply them by a hundred. That’s the years you’ll be sitting behind bars.”

Kimondo slashes me across the stomach. The cut isn’t deep but it bleeds profusely, and smarts like hell. I scream.

“Unajua the Chinese legend of ‘Death by a thousand cuts’?” Kimondo asks.

Murder ablaze in his eyes, he slashes me again, drawing a bloody “X”. I scream some more.

Kimondo swings again, but then a loud bang reverberates across the building. Startled, he touches a crimson patch spreading on the side of his stomach. He swivels around. Another bang rings out. The knife flies out of his hand. He falls to his knees. A figure enters, a smoking gun in shooting position.

“You?” I scream. “What are you doing here? And why did you wait until he cut me?”

“I followed you since I knew you’d make a fool of yourself. And I had to wait until he assaulted you so I could shoot him.”

“I wasn’t trying to kill him, fool.” She hands me a handkerchief. “Dab your wounds. I’ll handcuff the suspect.”

What to do if you have been raped
by David Muchai LLB Writer, Author & Content Creator at XLNC Media Inc
Entertainment
14 March 2021 - 06:00