Dr Selitol and the thief 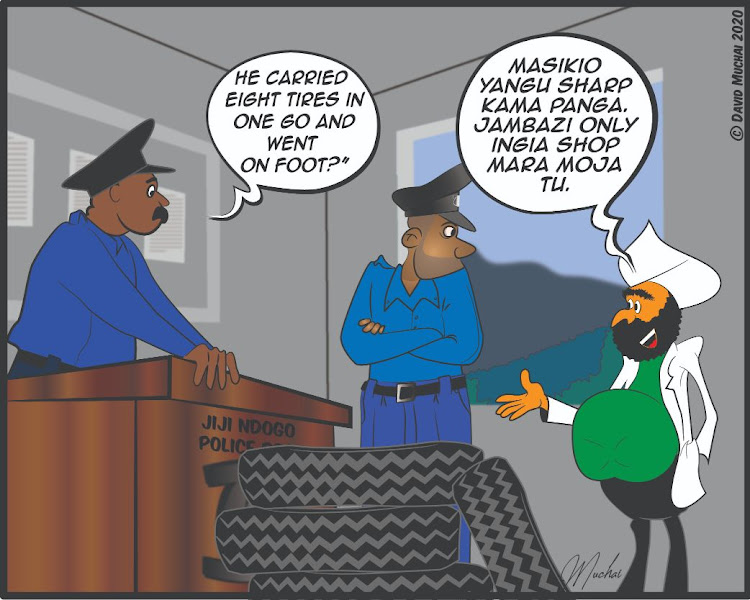 How to catch a thief
Image: DAVID MUCHAI

If there is one resident in Jiji Ndogo who doesn’t like visiting the police post, it’s our resident Indian, Dr Selitol. He owns the local general shop/chemist/spare shop.

The slashes could go on since the saying around here is that the only thing Dr Selitol doesn’t sell at his shop is life, but that he’s not too far from knowing how to stock that, too.

“True. We see everything. So, what can I do for you today?”

His honesty as a trader is questionable, but he’s my citizen.

“So, what happened exactly?”

“Mimi sema, last night my wife cook biryani. Biryani not good kwa tumbo yangu. So, mimi walk outside to the toilet. Naona hii jambazi walking away. I go to shop I see all my stock of tires imeenda! So, I follow jambazi to his house.”

Dr Selitol is the only person who owns a car in Jiji Ndogo, by the way.

“After kukamata yeye,” he tells me as we drive to our suspect’s, “mimi uzia yeye new door. Yake iko mahututi.”

The suspect is a young man called Kama Iko. Sure enough, Kama has eight tires in his house, but he claims they are all his. How did he acquire them?

“What’s wrong with wanting to open a shop?”

We load the tires into the car and bring them to the post.

“What’s going on?” Inspector Tembo asks once we get there.

I explain everything to him. He turns to Kama Iko.

“Young man, did you steal from Dr Selitol?”

“Dr Selitol,” Tembo continues, “you say he stole from you, but you didn’t nab him in your shop, did you?”

“On the road, I got that. What kind of transportation did he use?”

Inspector Tembo turns to me.

“He means by foot,” I explain.

“He carried eight tires and went on foot?”

“Tell him to prove that,” Kama Iko interjects. “If he can, then I’m guilty.”

“Can you do that, Dr Selitol?”

“Shouldn’t we ask for receipts?” I ask my boss.

He ignores me, repeats his order to Selitol.

No matter how much he tries, he cannot prove Kama ferried all the tires at once.

Tembo ignores me again, then calls Kama Iko back.

“You forgot your tires.”

“Thank you, afande,” he says gratefully.

He takes three tires and fixes them around his waist. He puts one around his neck and carries two on each arm.

Tembo stops him at the door.

“You’re under arrest, young man. Now we know how you did it, no?”