Even losers live to compete another day 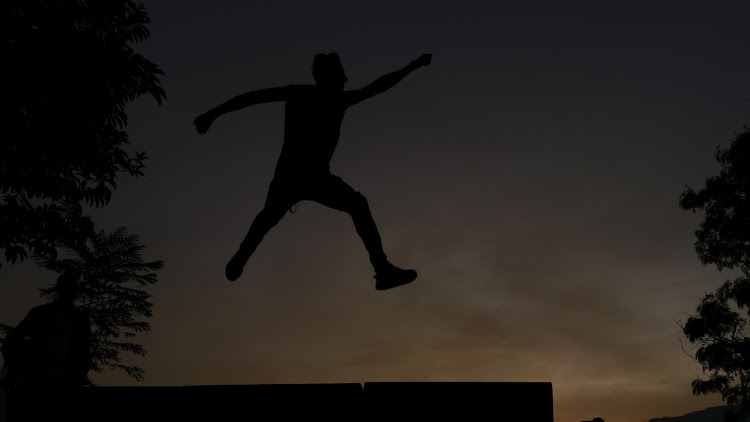 To play hop, skip and jump is simple. Three pieces of young sugarcane, each six inches in size, are placed parallel to each other. They are usually placed one metre apart. Humans line up on the right side. Note, right side. Never left.

The first in the queue starts this game. He or she rushes as described above then soars into the skies a metre to the three canes. He can choose to make any form of noise in inspiration, jest or wonder while mid-air. It doesn't matter.

What matters is that he hops over the first cane, steps between the second and third cane and instantly jumps over the third cane as far as possible!

An umpire often standing by the three canes on the ground walks to where the feet of the jumper hit the ground and draws a line. He can use any stick to draw the line.

Nowadays, people here in Kauka village, Bungoma county, use a dry, impotent sugarcane to mark the jump. After number one does his or her thing.

All the other souls follow the procedure described above one by one, the way cattle enter the cattle dip nearby for a pesticide swim.

The umpire is often a human of calm comportment. He walks repeatedly to where the jumpers land after the final cane is jumped. After making six marks, for example from six jumpers, all will come and witness these feats. The umpire will explain who jumped where.

Most jumpers guard their jump mark while chewing stolen sugarcanes from fields in the vicinity or a truck of the new Indian company recently pitched near the market.

The umpire must be a calm human. Even as jests and unprintable insults are exchanged among the jumpers, the umpire must be calm and with an erect cane point the fall mark of each jumper. Fair and square. A calm umpire is good for this game to be nice.

The mark of the one who jumped the farthest is the king. The third cane on the ground is moved there. The jumpers jostle to go back to the starting place several metres from the first cane on the ground. They then start the whole exercise again.

By then, half of Kauka village is always spectating. Ululation and cheering songs having hit a crescendo, even the priest of here abandons his heavy heavenly duties to attend this great game of canes on the ground and skies of God hosting sweaty souls jumping, hopping and screeching.

Ultimately, the soul who can stretch the V shape wherein dangles the cane of life or the garden of heaven to soar past the last cane the farthest, wins.

Whenever this occurs, the entire Kauka village erupts into a convulsive frenzy, with dust competing with oxygen to conquer the air. Women hold each other randomly and gyrate their waists in bent formation, with toddlers doing somersaults over their backs.

Elderly men recall their initiation jigs as they tap their bakoras on mango trees in tune with victory isukuti songs. The hero is often carried shoulder-high by a gang of urchins, who double up as cane cutters when the need arises.

Dogs without tails normally mock-fight with sugarcane rats the size of decent bread, creating a side show of sorts. Women gyrate their reserves with vigour. Infants plummel each other with chewed sugarcane cuds. Puppies yelp for more than milk. The priest signs the cross above the din with a solemn smile.

This specific Easter, I choose to salute the perennial winner Chemiati Joseck. For the fast time in a century, he was defeated by a new champion. The champion some say did not defeat him but argued almost violently that he did.

Smiling and very calm, Chemiati had resolved the matter this way. He had stood between the umpire and the challenger. He had lifted the hand of the challenger and addressed the strict adamant umpire.

He had said, and I quote, “No competition, in sports or even in politics, should tear us asunder. Even losers live to compete another day!” What candour! See sacrifice! What a lesson!

In fact, this lesson of sacrifice is what Easter is about, too! Death and resurrection of the Rabbi Jesus is our lesson of the ultimate sacrifice. His death reminds us Kenyans of the sacrifice the Muslims are making, too, by fasting in the ongoing Ramadhan. They go without food for whole days as they pray and exercise various forms of purity and piety now. The Muslims.