Cockerels fight to the death in the heat of Bungoma

• A traditional form of entertainment provides a bigger spectacle than usual 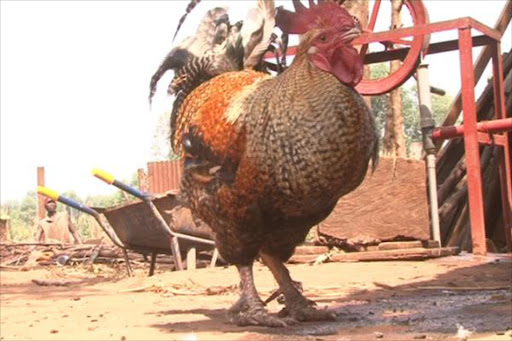 The crowd out here in sweltering Bungoma North, a mere 60 miles south of Kitale, surged forward for the sixth time.

This time around, the market women did not ululate.

Moving in a line like a delicate centipede in April drizzles, they formed a tantalising train. With their hands on each other's waists, each palm on either side of the waists in front, they swayed left to right in a gyrating line.

The line was circular also. They did this in the inner perimeter of the tight crowd of fasting villagers. The outer rings of this ripple of humanity had men and children sharing the centre view, too.

At the centre of this hullabaloo were two cocks squaring it out to cheers near the dilapidated parish brick church. The season was one of post-harvest. The fields were a forest of sugarcane stumps. The cutters had done a good job this year.

They had slashed the mature canes an inch from the base, leaving behind a stump here, there and everywhere. Bony cattle were now fattening and farting on these sugary leftovers. Beer parties were back in vogue. The market on Saturdays was a hotspot of sugary debauchery, again.

The women, wild with shimmering ecstasy, were now doing the annual April Fools’ Day Sinyumanyuma jig. They still were in the centipede formation but the train was moving backward.

In front of the first woman, in a faded campaign T-shirt with a lion insignia, was the veteran local councillor, aged 90-something. He kept capering like cane in a strong hailstorm, in bent formation. His bony hindquarters were shivering from left to right like feathers of a turkey in search of something.

His walking stick made of young guava tree was erect above him and glistening in the noon sun. The cocks kept eyeing this stick as they battled it out stoutly. The song was hitting a crescendo and frenzy was overtaking concentration here.

"Wang'iii eeeh Wang"iii!" crooned the nonagenarian with the stamina of a strong plough ox.

"WAAANG'III!!!!" came the chorus of the centipede of market women, gyrating delicately to the enjoyment of the millions watching this bloody duel of cocks.

At this very point, the alcoholic Nafula Chebukati, the pigmy umpire, blew her sugarcane whiskey bottle like a whistle of good kind. She was still perched at the fork of a Guruveria tree, where she had the most advanced view of the hullabaloo.

The tree creaked dangerously as it withstood her rotund figure on one branch. The cocks paused for more praise songs to charge this April Fool’s duel. They circled each other so much that sugarcaneless spectators in the inner circle fainted from kaleidoscopic dizziness. Women resurrecting them did so without stopping their debate on which cock was the better.

The whistle came again and this time it produced the desirable effect. The red cock tackled the one without feathers around its neck nastily!

The fight gained violence of unknown proportions as the two birds balled into a mound of blood. It raised dust as the two animals did the dance of death. Men worked themselves into a frenzy again.

One chap who had stood on tiptoe for three hours straight started screaming as his toes collapsed. Those near him responded with great applause without a second thought.

The village wag who all along had been chewing sterile sugarcanes in silence, eyeing the women passionlessly, did a sudden forward roll and started dancing while squatting in a perimeter around the roosters. Halleluja!

Children in tired school uniforms clapped their young palms into a noise that resembled those gigantic Massey Ferguson tractors of sugarcane you always find stuck fast in black cotton soil of here. Hallelujaaa!

This annual Easter cockfight had lasted for exactly four hours now and there was no end in sight. One inebriated youth who wore mitumba army uniform, called Chebukati Wangamati, claimed it a tie.

He elevated himself to be heard in a clever way. He raced away from all this. He raced up to the neighbouring Sunday school newly built by the new sugar factory. He plucked a stout pole that was yet to have a flag on it.

He came back running in full force. Then he leveraged himself into the skies of Yahweh with the bony pole abruptly. Up, up, up he went. I say up, Up, UP he soared!

As the pole gave way, it catapulted him in horizontal formation above the thick multitude. As he flew above the sweating heads below, all glued to the duel at the centre, he felt good. He closed his eyes for a second not to see himself bump into a lady bird in midflight.

Finally, he landed on his belly near the village wag. His head was cushioned narrowly by the lessoed bum of the largest market woman. She stumbled on the toes of the local parish council chairman with an eternal unfortunate smile, who hugged her to stabilise her. Halleluja.

It is at this point that the red cock saw red! Listen. As all eyes beheld the arrival of the flying Wangamati at the epicentre of the village square; as all eyes turned, as if by a divine switch, in that direction, the white cock remembered: it is better to die for something than nothing each Easter.

The rest is history.