Art of storytelling as antidote to election violence 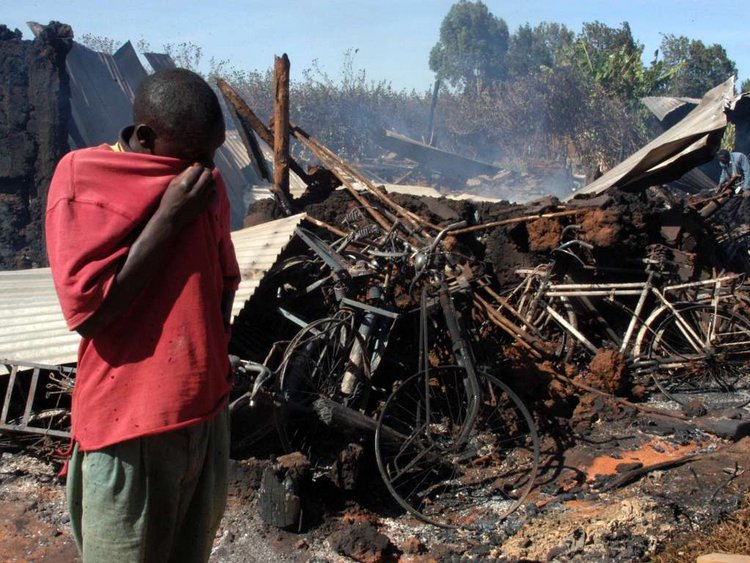 Kiambaa church in Eldoret during the 2007-08 post-election violence
Image: FILE

Septuagenarian Yaya ‘Patel’ Napunyi resigned without notice as a watchman in Industrial Area, Nairobi. It is the same fateful day that he started suffering from acute shadow boxing. The year was 2007.

He had witnessed the good side of Kenya with each pay from Hitesh Patel and his sons. They owned a plant near Mater Hospital that manufactured bolts and nuts in the thousands.

He had seen the evil side of Kenyans when his little daughter had been torched for voting for the wrong side of the presidential polls. His bow-legged wife Wanjiku had died trying to put out the fire of their mabati bedsitter at Mukuru kwa Reuben.

A nut had loosened that moment in the left side of his oblong bald head. From that moment, he had heard hornbills copulate without end above his ear drums.

The noise was now eternal and the only remedy he has is to shadow box the randy birds. No one else sees or hears them except the ageing Yaya. People call him Napunyi after a famous Kenyan pugilist of the era of a dictator.

In order to reach home and escape the mayhem of Nairobi in December 2007, Yaya had remembered his bloodline. He was of the line of soothsayers who were once revered and called Basaali by many in his native Bungoma. He had remembered two lessons from the maternal grandfather who raised him as an orphan.

One lesson was on the importance of fear. It keeps men alive to continue enjoying their lives and wives. They rarely perish, those who fear even a battle or two during elections. They live to see their toothless gums or the shadows of their twilight years.

He remembered also the plant that sprouts in trenches oozing with sewerage. The pink and indigo plant that resembles a hybrid of a sugarcane and lilies. A rarity, the plant is crucial in making the magic that instills street wisdom to both fools and the wise.

He had always eyed the plant in the sewerage systems of South B. He saw one that day of his escape from Nairobi and plucked it.

Desperate Yaya prepared it in a tunnel of a Kawangware road at midnight and continued his flight to Western on foot.

He started partaking it after Kimende and again after he overtook the baboons of Gilgil Weighbridge. By the time he arrived in Nakuru on the second day of his great trek, he had consumed two thirds of the stuff.

The yellow industrial helmet he wore was now heavy. The juala nylons he had on him as a cloth and his dangling member made many mistake him for a lunatic.

He had as a lunatic passed through burning Naivasha and tiptoed over barricades made near Gilgil by irate youths. Emaciated baboons of that region with pinkish behinds leaped with glee as they cheered on the irate youth, chanting war songs of their tribes in Sheng'.

He passed through these dire sights and places with the nylon tied to his waist and his member dangling like a cane of sugar without nectar.

The magical potion had turned his hair overnight into a sisal bush of kinkiness. His eyes had swollen to the size of the knee ball of a toddler. His skin was quite a farm of healthy boils.

Naked man in the news

Yaya recounts these national episodes to all locals who visit his fledgling carpentry workshop called “Kwa Patel”, in the sugarcane-surrounded market of Naitiri. Here in Bungoma North, he is nicknamed Kutalang'i. An enigma. He is revered for two main reasons.

The first one is related to his art of storytelling. The second one is his craft of carpentry. Yaya is one of the few Kenyans who can still make nails out of wood.

He chops them out of eucalyptus into the size of two inches or three. They resembled protuberant toothpicks. He can then take two planks of wood with holes opposite each other.

He can push such wooden nails into either hole opposite each other and mate the timber like two young lovers doing it live in a sugarcane field. He does it so well that most that he ties as such can only be separated in heaven. He boasts.

Most of his carpentry clientele are villagers with beds that had accidents due to heavy nightshift. It is one of the six wonders of this county in western Kenya to see. Motorbikes and mikokoteni line up for miles, waiting for their chance peacefully.

Of course, this is the chance to offload their load of beds with leg fractures or broken sheens. Tourists come from neighbouring sugarcane counties to see this unique traffic jam leading to Napunyi’s timber workshop.

His art of storytelling revolved around a principle he coined years ago called Woiyeee! It is one that Kenyans understand and use as a kind of wonder mixed with mass sympathy.

This Easter season has set old Napunyi to muse of using his important social status to build this nation he loves so much. Many listen to this sage and mark his words.

He has dreams of using his popular Woiyeee! principle in his popular art and craft of storytelling. He seeks to use it this election year to preach peace and avert the scenes of atrocities he witnessed in 2007.

The cane of heaven and parable of a hustler

People want something that will inspire them, says Akello Odenyo

John Muchangi keeps the spotlight on health amid political headlines

When others run away from danger, Andrew Kasuku covers it