Tangles of Biafra war in ‘Half of a Yellow Sun’ 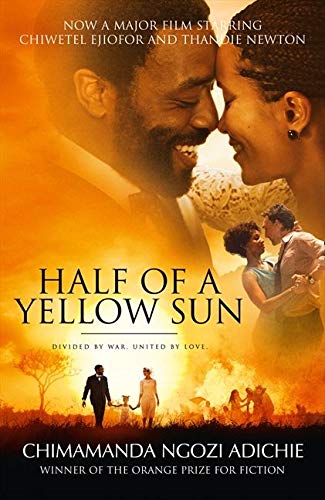 TITLE: Half of a Yellow Sun

About 320 pages long, this book didn’t seem like something I would read till the end. But the positive reviews I heard about it pushed me to do it. And it lived up to the hype.

Half of a Yellow Sun reenacts history during the late 60s (67-70) as Biafra struggled to establish an independent republic in southeastern Nigeria.

The book takes you through tumultuous years, showing the effects of war following a call for secession.

Author Chimamanda weaves together the lives of five characters: twin sisters Olanna and Kainene who are Igbo elites, Odenigbo, who is a university professor full of revolutionary zeal, a 13-year-old houseboy Ugwu and Richard an Englishman trying his hand at writing books.

The author takes you through events that took place from 1967 to 1970, when the war began, to its bitter end and the fall of Biafra; a society entangled in ethnic troubles and then civil war.

It opens with Ugwu getting a job at the house of the professor, who he calls master. His work revolves around cooking and serving Odenigbo’s guests as the professor frequently entertains intellectuals to discuss the political turmoil in Nigeria.

Life changes for Ugwu when Olanna, the professor’s beautiful mistress, who has traded her life of privilege in Lagos for a dusty university town and the charisma of her new lover, moves in. Luckily he forms a strong bond with both of them and is a loyal houseboy.

On the other hand, Richard is smitten by Olanna’s twin sister, an enigmatic figure who refuses to belong to anyone and runs a pompous company for the father.

As the book unfolds, Olanna, who Odenigbo’s mother never accepted as a wife, finds out the prof slept with a village girl, Amala, who then has his baby. She is furious at his betrayal, moves out and sleeps with Richard out of anger.

This drives a wedge between the twins who already have an awkward relationship. Olanna, however, goes back to Odenigbo and when they later learn that Amala has refused to keep her newborn daughter, Olanna decides that they keep her.

Meanwhile, trouble has been brewing between the Hausa and the Igbo people, which leads to a conflict where hundreds of people die in massacres, including Olanna's auntie and uncle.

The Igbo also suffer starvation as they seek to secede from Nigeria and create a new republic, called Biafra.

The conflict will see Olanna, Odenigbo, their infant daughter, whom they refer to only as "baby", and Ugwu forced to flee the dusty town Nsukka, where the university is situated and the major intellectual hub of the new nation. They end up in Umuahia, where they suffer and struggle due to food shortages, constant air raids and the environment of paranoia.

As the conflict worsens, Umuahia is under attack by the military and they are again forced to move from Umuahia to Port Harcourt and join Kainene and Richard, where Kainene runs a refugee camp.

But even here, the situation gets hopeless, with no food and medication. Kainene decides to trade across enemy lines just to get food supplies, but does not return even after the end of the war a few weeks later, when Biafra is bought to its knees.

The book ends ambiguously, with the reader not knowing if Kainene lives.

Half of a Yellow Sun is a remarkable novel about colonialism, ethnic allegiances, class and race, with snippets of how love can complicate them all.

Despite spending decades in the US, he says there is no place like home
News
1 year ago
KINGSLEY KANU: Biafrans hoped for camaraderie from Kenyans, not betrayal
by SARAH KANYARA
Books
30 October 2021 - 04:00