The pithy poetry in ‘Obama, A Mamma’ 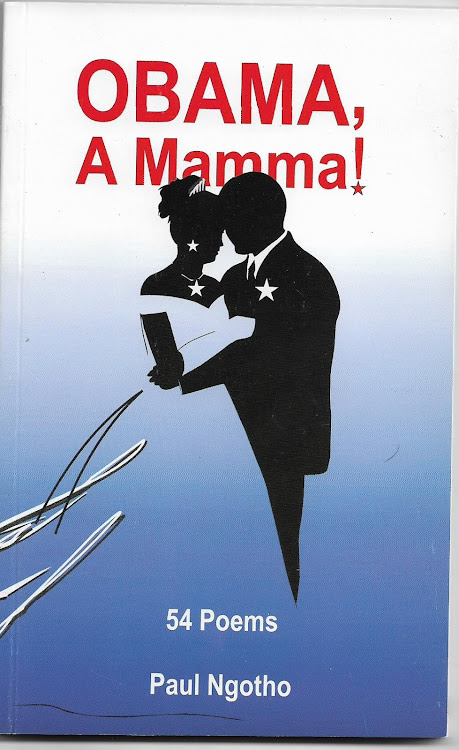 The magic of poetry is that it is magnetic and the spark in it attracts us to splendid language use. Humans are attuned to beauty most naturally, for were they not inhabitants of a divinely created garden first? This powerful attraction to sights and sounds established through carefully cultivated language is both a reminder of our symbolic pasts both divine and pristine.

Somewhere where one finds this sublime truth is in a new Kenyan book of verse. Obama, A Mamma (2020) is a collection of over-short pithy poems penned by land surveyor Paul Ngotho, 59, who has vast experience in his field both in Kenya and abroad. The book is his debut and announces his arrival on the vibrant scene of contemporary Kenyan poetry. He is a self-taught closet poet and bibliophile.

In the preface to the book, we are made aware that he has been writing poetry since he was 18. The poems collected in the tantalisingly titled book were penned between 1979 and 2015. Some have been published in various literary journals in this long time, while others have been presented at creative writing workshops.

Indeed, these 54 poems are a harvest of years of fascination with words and the worlds they create at the hand of someone with a gift for geographies of different kinds. The title of the book is a land worth discovering. Both Ngotho and retired US President Barack Obama were born in 1961. Herein rests the poet’s enthralment with Obama's stellar and colourful political career against all odds.

The title of the book celebrates the Kenyan homecoming of Obama, then aged 54, and each poem is, therefore, a salutation to the age of both the poet and his famous muse. Obama, A Mamma (2020), therefore, can be read as an anthology. It offers snippets of shades of life inspired by a muse whose age reflects and refracts the common experiences of our country in a unique way.

The book is divided into five sub-sections that are curiously titled 'courses'. We have the Table of Content, which is named, 'The Menu'. This culinary representation of what poems are to be served to the reader announces a five-course meal of ala carte poetical nature.

To read this new book, therefore, is to sample verse helpings of: Scenes, Musings, Heartstrings, Continental Circles and Homecoming. Each is a moment of literary delight for the gourmet of words, to whom the taste of life lies in poetic nourishment.

From the first sub-section named Scenes, the reader will discover the poem ‘Red Lights’ (p12-13). In a scene figuratively set at the famous roundabout where University Way merges with Uhuru Highway, we are presented with the plight of a hustler.

Here at this prime place in the heart of a modern African city, the lesson against indifference is offered aptly. How many times? The poet wistfully asks. How many times do we observe red traffic lights (and their danger warning), yet pay no attention to a vagabond of the city, whose perpetual state of danger is of kinds without number?

‘Money’ (p18), the poet avers: Money’s sweet/like honey/ Can buy a home/And many luxuries/ But it's fake. In these two stanzas comes a contradiction that is familiar to our people. Money is the parent of evil, yet it is the parent of good, too. Shilingi yaua tena maua, crooned a singer once. Echoing this, Ngotho cautions the pursuit of materialism against the loftier meanings of life.

‘Karibu Nyumbani’ (p84) is a homage to Obama and assures the reader our poet is not a social critic only. He is a sensitive antenna of the society itself. In his art, he questions the nature of things around us but also nurtures the things we feel deeply about in our heart of hearts. Family, well-being, compassion, ethics and moral acumen are major concerns in this tantalising book.

To read the poetry of Ngotho is to take a survey of the landscape of language itself. His art is mapped with metaphors uniquely deployed and demarcated with delicate signposts of humour and wit. In his interiority of mood, he casts the shadow of a sage over the members of our society, regardless of their standing.

In his exteriority of public art, we discover an energetic professional from a discipline that surveys lands of reality using words of creativity. Here is a bard whose voice soars from the closet of poetry as a private hobby, to the public realm where poetry is art, craft and philosophy served as one meal.

The book is available from all major bookshops. It can also be ordered directly from the poet via [email protected]