How to handle a rowdy boda boda crowd

• Do not engage in a shouting match against rowdy crowd, even if you are on the right 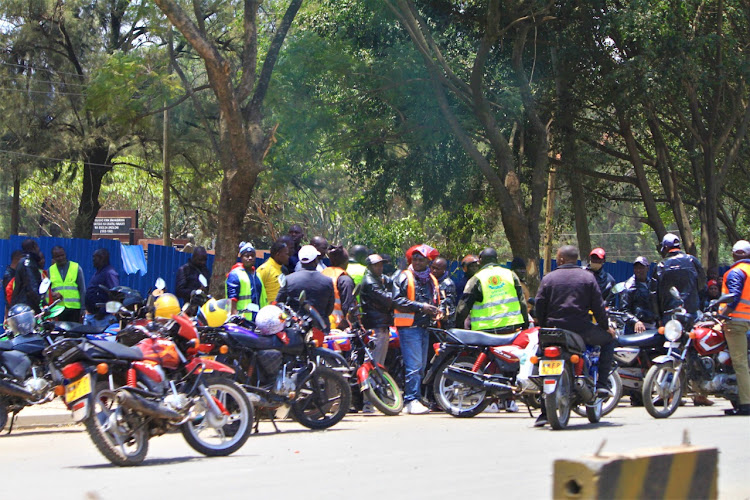 Boda boda operators regroup at Uhuru Park to escape an ongoing operation in the CBD on March 9
Image: EZEKIEL AMINGÁ

Even before the Forest Road incident involving a female motorist and rowdy boda boda operatives, the sector was on the spot for reckless behaviour.

A week earlier, a friend of mine was narrating how his car was almost torched by a group of boda boda youths, who were claiming he had knocked a young girl down. It only took the intervention of traffic police, who happened to be in the vicinity, to save this man's life.

The boda boda sector has been described as a law unto itself as far as traffic laws are concerned. Their blood is often boiling and they do not appreciate whoever thinks of himself or herself as too lofty for them.

Many motorists who have had a run-in with rowdy boda boda youth are often left helpless and at the mercy of these marauding goons. Even if on the right, one of the worst mistakes you can make as a driver is to assume an air of arrogance with such a crowd.

In moments when adrenaline is at an all-time high, it helps to be calm and act as the bigger man (or woman). When an accident occurs, the last thing you want to do is to argue your case as if the rowdy boda boda youths are going to magically believe you and side with you.

Instead, check on other victims who you may be involved with in the accident. In case you have knocked someone down, their health should be the first priority and the most immediate concern should be to get them to a nearby hospital.

In a situation where you are surrounded by a rowdy crowd that seems hellbent on getting their pound of flesh, it helps to be observant. Within such a crowd, there is usually a ringleader who wields an unconscious influence on others.

Reach out to him or her to get him to your side and come to a reasonable conclusion. Maintaining a cool posture and not turning the situation into a shouting match will convince the crowd you mean well and want to resolve the situation amicably.

Also, such situations are often an opportunity for pickpockets and thieves to make a killing. You should be cognisant of this, always aware that such confrontations may only be a ruse to rob you of your valuables.

If there is a police station nearby and the situation seems out of hand, it is advisable to drive into the station for your own safety. From there, you can explain the entire event to the police officer and why you had to run away from an accident scene.

I have also read in other forums of people recommending carrying some sort of weapon in the car for security. These weapons include a rungu, panga or even a gun (if you can afford it).

To each his own. Just remember that an unprovoked use of your weapon translates into a criminal offence by you.

Boda boda madness report reveals any crime you can imagine

It's not just crazy riding, it's assault, robbery with violence, drug abuse, even murder.
News
1 year ago
Slowing down the boda boda madness
Post a comment
WATCH: The latest videos from the Star
by OMONDI ONYATTA
Sasa
12 April 2022 - 04:00
Read The E-Paper