• Introduced by colonialists as a hardy, ornamental plant, opuntia is now out of control 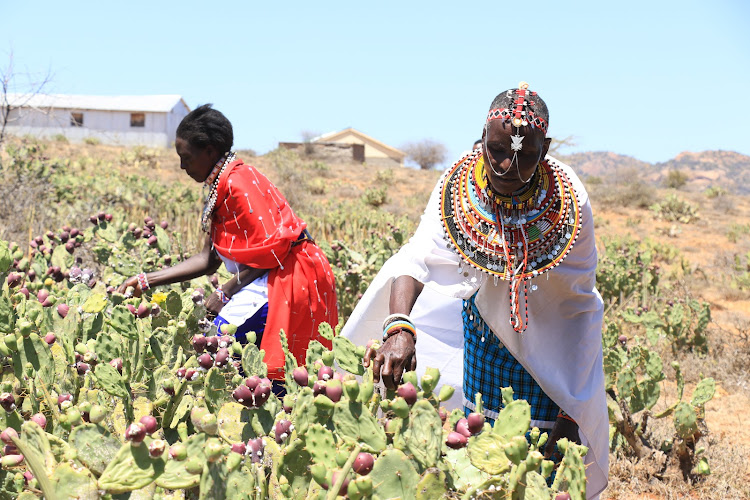 Margaret Mamai and other women infect opuntia cactus with cochineal insects, which can kill the plant.
Image: John Muchangi

Outside Margaret Mamai’s house, the landscape rolls and undulates for kilometres into the horizon.

She cannot graze her livestock on most of it, and is slowly being pushed out of the small portion where the family house stands.

But Mamai is fighting back. Yet she does not have much time.

The 60-year-old grandmother is up against a fast-growing cactus known as Opuntia stricta, which has colonised rangelands in Laikipia county and has fended off past efforts to eliminate It.

It grows with flat, succulent paddles barbed with sharp spines, while its purplish, edible fruit carries tufts of bristles that can cause significant allergic skin reactions.

“I don’t know how the future will be because this plant is very strong,” she says.

Remote sensing conducted by the US Forest Service in Naibunga Community Conservancy, where Mamai lives, showed that the cactus is found on 90 per cent of the region’s landscape, and it dominates the vegetation on about 12 per cent of the land.

The small spines, called glochids, lodge in the mouths, throats, stomachs and intestines of livestock when they eat the cactus fruits.

“They lose weight, become emaciated. The death is very painful because they stick out their swollen tongues, full of abscesses, and groan until they die,” Mamai says.

The large spines on the paddles often blind livestock by piercing their eyes as they try to access forage.

“Our livestock is our wealth. We used to sell livestock to take our children to school but now we cannot. When you see your cow opening its mouth and sticking out the tongue, just know it’s going to die.”

Mamai is now leading about 20 women who have been taught to play the last card against opuntia.

Having tried to eliminate the cactus through other methods and failed, the community has now pinned its hopes on a biological control method first piloted in Kenya in 2014.

The women are leading the fight by rearing tiny bugs called cochineal, which infest the cactus and slowly kill it by sucking out the sap.

The cochineal (Dactylopius opuntiae) feeds solely on Opuntia stricta and is unable to feed or grow on any other cactus or native plant species in Laikipia.

Local conservation organisation Northern Rangelands Trust has supported the community with small greenhouses, where the bugs are reared on cactus paddles planted in iron buckets for about two weeks.

Once such greenhouse is located at Mamai’s compound.

“After two weeks, I usually call the other women. When they come, we take the infested opuntias in buckets from the greenhouse,” she says.

“So we cut them into pieces that we place on other opuntia’s in the shamba so they can also be infested and die,” she says.

This method has been tested in countries such as South Africa and Australia, where the invasive plant once conquered drylands.

The caretakers are women because they are the people in the homesteads. It’s also a way of empowering women to participate in conservation

In March 2011, the Kenya Plant Health Inspectorate Services granted the UK non-profit Centre for Agriculture Biosciences International permission to introduce the cochineal in Kenya, for testing.

The National Environment Management Authority finally granted permission to release the cochineal in 2014, after which it was mass-reared and released at a number of localities in Ol Jogi Wildlife Conservancy, Laikipia.

Cochineals are tiny and their presence on a cactus is confirmed when one sees balls of fluff, the waxy white threads secreted by females and nymphs to provide them with shelter.

Jacqueline Nalenoi, a field education assistant with NRT, says there are 18 greenhouses in the region, six per conservancy.

“The caretakers are women because they are the people in the homesteads. It’s also a way of empowering women to participate in conservation,” she says.

“When the cochineal is ready every two to three weeks, we employ 40 casuals per conservancy. Also the care.”

There have been cases of children whose eyes were impaled by opuntia’s thorns while playing or trying to pick fruits.

“It was easy to use women because they are ready and available to work. They are the ones who suffer the most when children are affected,” Nalenoi says. 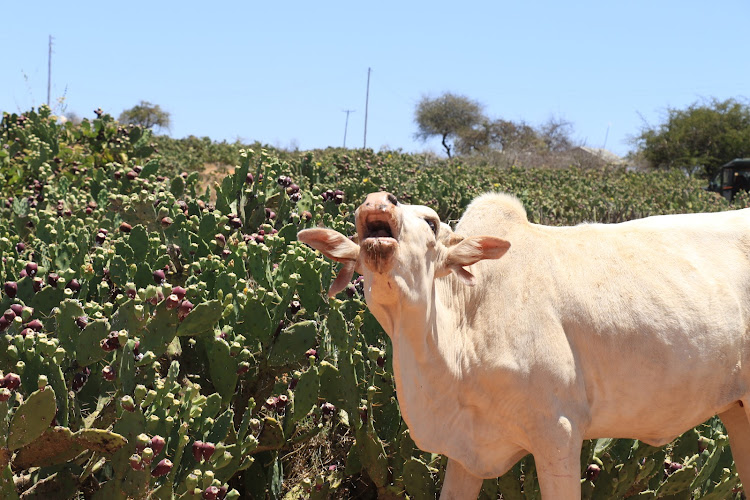 STRUGGLING TO SWALLOW: The small spines lodge in the mouths, throats, stomachs and intestines of livestock when they eat the cactus fruits. Naibunga Community Conservancy in Laikipia.
Image: JOHN MUCHANGI

The cactus, also called prickly pear, was introduced in Kenya during colonial times as an ornamental plant capable of living in arid regions.

Wilson Sintaroi, chairman of Naibunga community conservancy, says he always saw scattered opuntia catcuses as a child but never imagined one day it would gain so much power over people.

Nowadays, he is always sad seeing friends emigrate when opuntia chokes their land and homesteads.

He says because no other vegetation grows where opuntia is dominant, soil erosion is common.

“If we get more greenhouses to grow the bugs and have more women involved, I am sure one day we can control opuntia,” he says.

It is also a growing threat to wild animals and has been blamed for the deaths of young elephants and herbivores.

In Loisaba conservancy, Laikipia district, it is now considered the second-biggest threat to the wildlife population in northern Kenya after poaching, although this is unconfirmed.

Cochineal work well during the dry season but are always washed away from the invasive plant when it rains.

In March last year, four researchers published a preliminary analysis of the costs and benefits of the biological control agent in Kenya.

The analysis showed this biocontrol programme is the most cost-effective management intervention compared to physical and/or chemical control.

“Although the impact of the cochineal is still fairly localised, we are confident that it will establish in much of the invaded range and reduce the impacts of the invasive cactus, consequently improving rangeland condition and livelihoods,” the authors say.

The study is published in Springer Nature journal. The authors are Winnie Nunda, and Fernadis Makale. Others are Arne Witt and Kathryn Reynolds.

In Australia, the cactus biocontrol programme is estimated to have cost AU$21.1 million, resulting in a net present value of AU$3.1 billion, which is considered to be an underestimate of the total benefits.

Australia’s programme is considered one of the most successful weed control programmes in the world, reducing invasions of Opuntia stricta from an estimated 24 million hectares to just a few scattered plants, providing permanent and complete control.

It now classified as a prohibited invasive plant in Australia, and must not be given away, sold or released into the environment.

The country’s Biosecurity Act 2014 requires that all sightings to be reported to authorities within 24 hours. 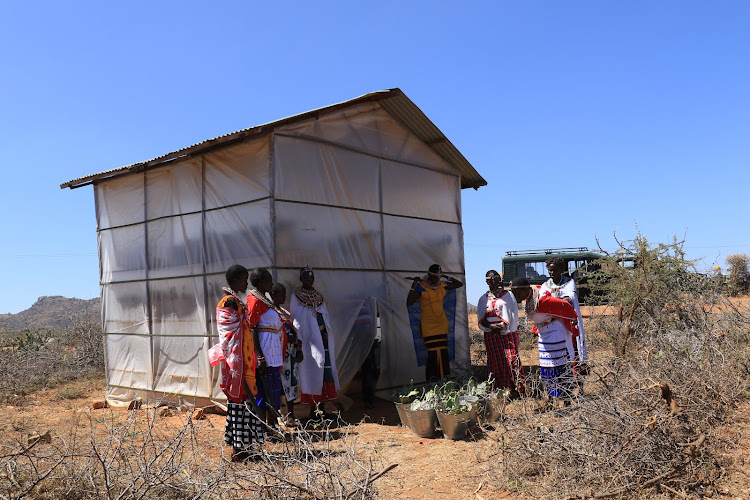 Women from Naibunga Community Conservancy in Laikipia gather at the greenhouse at Margaret Mamai's home, where they propagate the insects. NRT has financed the process.
Image: JOHN MUCHANGI

“Most of these successes can be attributed to various cochineal species,” the authors say.

Studies in South Africa show that without biocontrol, the area occupied by the invasive cactus Opuntia aurantiaca Lindl in South Africa could have been 15 times greater than it is today.

The authors say the true benefits of biocontrol are only really evident when compared to the costs of conventional weed control interventions. Chemical control can also be expensive but less than the costs of physical control.

They say chemical and physical control methods become even more expensive when you consider their non-target impacts.

For example, physical control can result in extensive damage to non-target species, including injuries to those involved in clearing operations.

“Pesticides can have direct negative health impacts on, among others, people and livestock, natural enemies of crop pests, crop pollinators and wildlife,” they say.

Post a comment
WATCH: The latest videos from the Star
by JOHN MUCHANGI Science Editor
Sasa
12 March 2021 - 05:00
Read The E-Paper