"I am sorry!!! I have put my family and myself in a bad situation."

• He said he is perturbed by the motive and timing of the past videos which have led unnecessary trolling of the child and his wife.

• Samidoh had denied being in a sexual relationship with Karen and being the father of her unborn child. He also denied attending her baby shower in Nairobi last year. 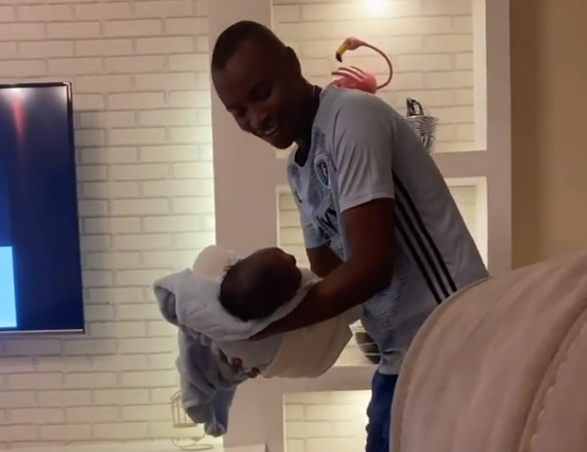 Since last year, rumours have been rife that the two are an item, a topic they didn't quite confirm nor deny.

Samidoh had denied being in a sexual relationship with Karen and being the father of her unborn child.

But things took a different turn when Nyamu this week confirmed she sired her baby with Samidoh, who is a married man.

She took to social media to post a video of Samidoh holding the baby, with the city lawyer captioning the moment, “A dad doesn’t tell you that he loves you, he shows you #muchokis."

This statement raised eyebrows even more with netizens questioning if they are together considering Samidoh is married with kids.

This forced Samidoh to come clean and confess that he indeed sired a child with Nyamu, whom they had created a friendship that led to the birth of a child.

"I am sorry!!! I have put my family and myself in a bad situation. It is true I had a friendship with Ms Karen Nyamu and its this involvement that led to the birth of an innocent child whom I have and will always support both emotionally and materially. I am a proud father to my children," he said.

He has however said he is perturbed by the motive and timing of the past videos which have led to the unnecessary trolling of the child and his wife.

"I have never left my wife of 11 years for another woman. I apologized to her and my family before. I now apologize to you my fans for setting a bad example. I take full responsibility for my mistakes which I regret.

"We have had our own shares of ups and downs but we are stronger and happy together," he concluded.

When the news broke last year, Word Is got hold of Samidoh who then denied of being Karen Nyamu's baby daddy.

And when asked about his wife's reaction after the story broke, Samidoh said she was okay.

"I was worried about my wife but we have talked and she is okay. She knows I am not in a sexual relationship with Karen since the allegations have reached her again sometimes back," he said.

After sharing the video, Nyamu on the other hand has not given trolls the time or day and has come out blazing hot to shut them.

A follower by the name Jane James wrote, "You're dating a married man and think he would never cheat on you."

Another follower, hadassahnjagzz, wrote, "So what!! Sio wewe wamwisho... The truth is you’ll remain a mistress woman! Don’t think he will leave his wife and marry you and by the way, take care of your child!"

The mother of two responded, telling her off."@hadassahnjagzz listen, I’m not a petty woman like you to be happy with a man who can leave his wife. That’s a boy. Does it pain you so much that he is taking care of his son? Kama chungu tema."

After Samidoh came out clean about their relationship, Nyamu seems to be enjoying the attention.

In an insta story that has now been deleted, Nyamu made fun of the whole situation, asking Samidoh why he was not holding his wife the way he holds her. 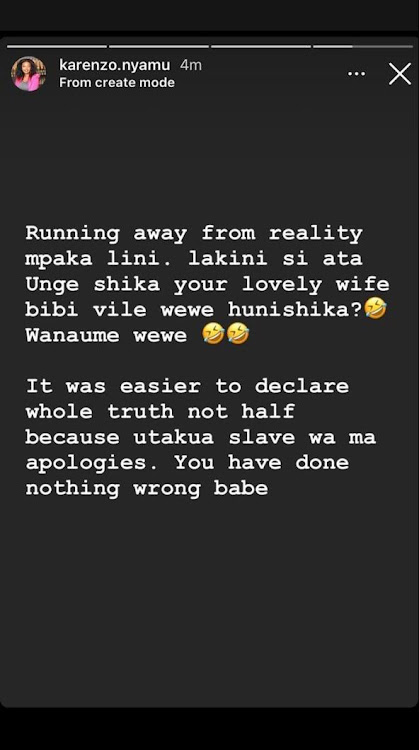 What babymoon? I am at home, says Samidoh

Samidoh denies allegations he is in Nakuru for the babymoon of Karen Nyamu.
Sasa
6 months ago

She will never marry because of the experience, termed Samidoh a 'friend'
Sasa
3 months ago
by TRACY MUTINDA Lifestyle, Entertainment Writer
Sasa
02 March 2021 - 10:57