Many like me are going through hell in silence — Letoya 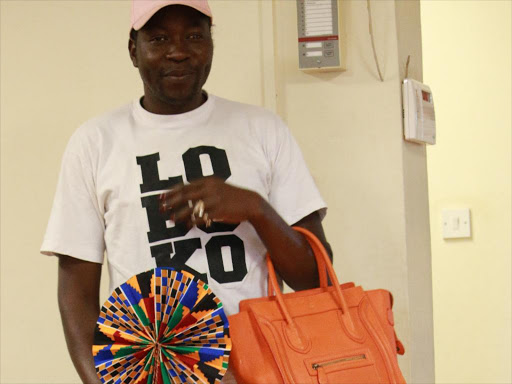 The LGBT community is not

in Kenya. Recently, they held a meeting where they discussed the way forward. Top of the agenda was urging the government to

the rights of trans and gender-diverse people as Kenyans who are protected by the Constitution.

Brave transgender Letoya Johnstone, who was part of the meeting, says they want to let the world and the government know that "us being here is not interrupting anything. We're people who have voices and it's true that we do exist. The world needs to be involved and not to fear us, as if we're aliens".

She urges the government to listen to their stories, issues, agendas and get to see what they are capable of doing, so all citizens, regardless of gender or sexuality, can live as one.

Letoya says they also talked about transgender visibility and acceptance. They want both the government

the public to get to understand

we're talking about key issues that are affecting us such as healthwise.

We're just asking for what is right for us," she says.

"It was more of support and getting to make the people

and understand deeply that we do exist, and just like any other human beings, we are entitled to the same law that is governing Kenya. We're entitled to basic needs,

Letoya's parents were conflicted when she identified as a girl.

"The reaction was interesting. They've always known what they've heard from when I was young, and as things are growing, people change. It's more like adolescence, and some people

who they really are. My parents had issues with it extremely up to now. But then again, I just hope one day they will adjust because it really needs time and the thing I always pray for is that they could really understand the serenity prayer."

Every parent, she says, has their own way of expressing their love, and Letoya's might not have agreed with who she is because of their culture and upbringing. But Letoya says you can't take away her

unless you take her life, which she says her parents wouldn't do.

"They could just be mad, angry or disappointed

in whichever way, but they are great human beings and we're having challenges, but I'm ready to walk the journey," Letoya says.

She says she discovered she was a woman from when she was born.

The LGBT family faces a lot of problems, among them

rejection. Letoya says she has experienced these and almost gave up in the process.

"There is a point in life I lost all the deals with top companies I was working with," she says.

"There is nothing as bad as sitting at home with your certificates just because of your sexuality or people overlooking your talent.

It's one of the worst things.

It really makes it crazy, and these are some of the challenges we're going through.

some LGBT community members of being cruel to each other.

"Members of the LGBT community are showing more hate to their fellow members, even more than the heterosexual people," she says.

"Heterosexual people want to kill you, hate you, say and do bad things to you. But for LGBT, once they sideline you that's it, to an extent you end up asking yourself how did we get here? I thought we were on the same boat."

She says the transgender people are very strong but asks: "For how long are we going to be a punching bag? The government needs to intervene not because we're transpeople but because we're citizens of this country."

describes transgender as an individual who has a problem with identity in regards to gender. One who identifies themselves to have a gender opposite

to their biological one. If born a boy, he identifies himself as a girl, and vice versa.

She says it's not a must for a transgender to undergo surgery to change their sexual orientation.

"The law in Kenya doesn't allow that kind of operation. It has to be something that's legally approved by the law. We don't have it in the Health Bill," Dr Margaret says.

"Many of the transgenders around are suffering psychologically. Even with the operation, they need the society to support them. Otherwise, they end up being depressed and suicidal."

WHAT THE LAW SAYS

Margaret says in Kenya, only hermaphrodites are allowed to undergo surgery.

"When a parent notices something about their kids, they're taken for surgeries when they're still young. This enables the child to socialise and grow up knowing their sexuality. But when one comes for surgery if he's an adult, it's challenging, and many

She advises Kenyans not to be judgemental and accept transgenders the way they are.

"Don't just accept their behaviour but accept that they are part of the society," she tells parents with transgender children.

"These people need love and acceptance. Walk with them

the journey. Help them identify ways to keep safe because the society hates them and mistreats them."

to develop a thick skin for trolls. "Verbal attack is at 90 per cent. Many expect you to be prettier if you're a transgender," she says.

"Trolls are really crazy. I don't think if there's anybody who's prepared to deal with them. Some of them I get back to if it needs to be addressed. Some of them I don't because at the end of the day, it's just a moment and time. But some of them are so painful and crazy and can destroy you and can really even make you suicidal, but you need to be emotionally intelligent."

Talking about LGBT and religion,

Margaret says: "The word of God is very clear in terms of accepting people who are gay and not accepting homosexuality. [You shall not lie with a male as with a woman; it is an abomination. (Leviticus 18:22)]."