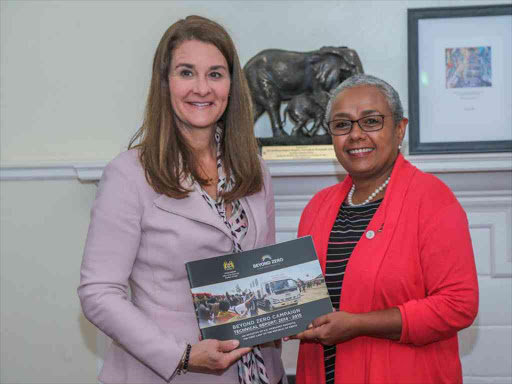 During her visit to Kenya in 2016, Melinda Gates knocked on several doors in Nairobi slums.

She was accompanied by Christine Wangeci, a data collector.

Christine works with the PMA2020, a data collection facility for family planning, water and sanitation.

Many of the women they met had never been asked questions about their lives before.

she’s there to learn more about her, it sends a message to that woman that she matters—that someone cares about her.

In the latest annual letter, Melinda says this struck her as a powerful point.

“What we choose to measure is a reflection of what society values. That’s why when it comes to understanding the lives of women and girls, the world can’t accept ‘I don’t know’ as an answer,” Melinda writes.

Melinda and Bill Gates share nine things that have surprised them over the course of their nearly 20 years of work together in global health and development.

In one of the topics, the two address reasons why data can be sexist.

Melinda says they could easily have spent the whole letter talking about the role data plays in improving the lives of the poor.

“Data leads to better decisions and better policies. It helps us create goals and measure progress. It enables advocacy and accountability. That’s why the missing data about women and girls’ lives is so harmful. It gets in the way of helping them make their lives better,” she says.

Who, for instance, knows how much income women in developing countries earned last year? How much property do they own? Or how many more hours do girls spend on household chores than boys?

“I don’t know. Neither does anyone else. The data just doesn’t exist,” Melinda says.

She notes the little available data on women is mostly about their reproductive health—because in places where women’s primary role in society is being a wife and mother, that’s what researchers tend to focus on.

Three years ago, the Bill and Melinda Gates Foundation made a big investment to start filling some of these data gaps.

“We are part of a network of organisations working to accelerate a gender data revolution—from empowering data collectors with new tools and training to breaking down existing datasets by gender to mine them for insights,” Melinda says.

Bill adds: “You can’t improve things if you don’t know what’s going on with half the population. There’s no good reason for that, now that technology makes it so much easier to gather data.”

Christine Wangeci works with the PMA2020, a data collection facility for family planning, water and sanitation.

In their letter, the two philanthropists also talk about the importance of investing in Africa’s growing population of young people.

“The world keeps getting older, but Africa stays (nearly) the same age. It

sounds confusing, but it makes sense when you break it down,” says Bill.

He notes while the median age in USA is 35, in Africa it is just 18 years and it will remain this way for a long time.

In Kenya, the median age is 18 as well, according to the National Bureau of Statistics.

“There are a lot of reasons for this. One is that the annual number of births is

going up in the poorest parts of sub-Saharan Africa, even as it goes down

in other parts of Africa. This can be either an asset or a source of instability,” Bill says.

The two call for investment in human capital in Africa – that is, improving access to high quality health and education.

communities but the entire world.

“If sub-Saharan Africa commits to investing in its young people, the region could double its share of the global labor force by 2050, unlocking a better life for hundreds of millions of people,” says Melinda Gates.