The agony of stillbirth and how to prevent it

•According to 2018 Unicef statistics, every year, an estimated 2.6 million babies are stillborn, yet half of them are alive at the start of labour.

•World Health Organisation notes that early foetal death is very common in all settings, occurring in 15 per cent of pregnancies in the developed world. 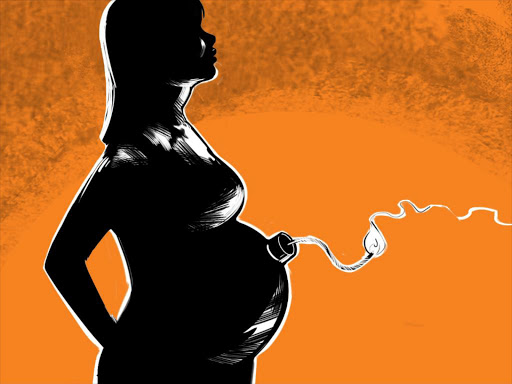 Mia Atieno* (not her real name), 35, was seated outside her grass-thatched house in Homa Bay county, sieving maize, when suddenly a sharp pain gripped her lower abdomen.

With only three weeks left before delivery, Mia quickly called her 40-year-old husband, who had been closely watching her as he packaged charcoal for sale. The couple were looking forward to the birth of their baby and had already made the necessary arrangements in case Mia went into labour.

Immediately they arrived at the hospital, Mia was admitted and rushed to the theatre. The doctors who examined her were troubled when they could not feel a heartbeat. With her history of losing past pregnancies just before delivery, the doctors were determined to ensure that this time round, the pregnancy came to fruition.

“I woke up from the theatre and when I asked for my baby, l could not believe what the doctors were telling me! That my child had died! At that time, the pain from the surgery was eating into my body and mind,” Mia says.

A distraught Mia could not believe that she was third time unlucky, and would be leaving the hospital empty-handed. The doctors sadly explained to her that the baby had died in her womb a week earlier and the pain she was experiencing was an attempt by her body to eject the foetus.

Mia suffered from intra-uterine foetal death — where babies die in the uterus before they are born. This can usually happen during the last half of the pregnancy or during labour and birth, when such a death is considered an intrapartum death. When the baby who has died during labour and birth is born, this is known as a stillbirth. A baby who is born alive but dies in the first four weeks of life is recorded as a neonatal death.

“I cannot believe that this is the third child I am losing! I don’t understand why this is happening! Or is my body not ready to carry the babies?” Mia said in anguish.

WHY IT'S SO BAFFLING

According to 2018 Unicef statistics, every year, an estimated 2.6 million babies are stillborn, yet half of them are alive at the start of labour.

World Health Organisation notes that early foetal death is very common in all settings, occurring in 15 per cent of pregnancies in the developed world.

Mia, like many others, have lost their unborn children without knowing exactly what happened. Many are unaware whether what they have gone through is a miscarriage, stillbirth or foetal death, and are even further at a loss on what actually causes it.

Simply put, about one in every 26 children born in Kenya dies before age one, while postneonatal mortality is 16 deaths per 1,000 live births. Fifty-six percent of infant deaths in Kenya occur during the first month of life.

As I talk to Mia, I meet Mercy Kerubo, who narrates her own tragic story. She lost her baby while three months pregnant.

“Before going to see a doctor the previous week, I had a sharp pain in my stomach. It took 10 to 15 minutes for the pain to go away. I consulted a friend of mine, who said the pain was normal but that I should go for a check-up immediately, which I did,” she said.

Mercy told the Star that when she arrived at the hospital, she met pregnant women who were also waiting for the gynaecologist appointment.

“Before the doctor could attend to me, a woman came out of the doctor’s office, dazed and crying. I was so worried, as l thought only bad news could bring such sadness and torture to a fellow pregnant woman,” she said.

When she entered the doctor’s office, out of curiosity, she asked why the patient woman was devastated. “He told me the woman was 41 years old and had lost the only child she had hoped for after 20 years of marriage.”

Concerned about Mercy's pregnancy, the doctor asked her to go for a scan to eliminate possible causes of the sharp pains she had been experiencing.

“I was shocked when the doctor said he could not detect a heartbeat. I did not want to believe him, so alongside my husband Fred Kerubo, we went to another doctor, who did an ultrasound plus vaginal scan, and told us the same thing. There was no heartbeat,” Mercy recalls in tears.

She and Mia are yet to come to terms with the loss of their babies. Both are still angry with their doctors because none of them told them the cause of death.

Mia and Mercy are just among the many women who lose their babies every day in Kenya. The failure by the medical personnel to give proper explanations or educate women on what causes these deaths mean that many would-be mothers go through life blaming themselves, their ‘blood’ and even ‘curses’ for the loss of their babies before term.

Early pregnancy losses are those that occur during the first trimester of the pregnancy. A trimester is usually about 12-13 weeks.

More than 80 per cent of newborn deaths are a result of premature birth, complications during labour and delivery and infections such as sepsis, meningitis and pneumonia.

Speaking to the Star, Kenyatta National Hospital gynaecologist Grace Wanjiku said the commonest cause of the deaths is 'genetic abnormalities'.

"These are inherent 'mistakes' in the genetic codes carried by the egg and the sperm. These are inherited down generations and some are unique to the individual parents. They account for a very big percentage of the spontaneous abortions," she said.

Wanjiku said structural problems, such as congenital (inborn) abnormalities of the uterus in the mother’s womb, could also cause the deaths.

"There are also acquired abnormalities, such as fibroids or adhesion in the uterus due to previous treatments that involve instrumentation of the uterus. What people commonly call 'kuoshwa uterus' can also be a cause," she said.

This means that once your baby dies, the doctors will clean your uterus by doing a minor surgery to evacuate the foetus from your womb.

Other causes include weakness in the tissues that form the reproductive tract, and drug use in early pregnancy.

"This one is rare and it mostly causes what we call cervical incompetence, which can also arise from prior injury of the cervical tissue due to instrumentation during an abortion," she says.

"The instrumentation can cause tears that result in structural weakness of the cervix, which results in recurrent pregnancy losses," Dr Wanjiku said.

She added that foetal loss can also be as a result of medical conditions such as hypertension and diabetes.

"Hypertension is a big killer of babies in uterus when not controlled. Diabetes tends to kill babies just before they are due for birth, and it's usually sudden death. This again is if the diabetes is not controlled," she said.

One way is through preconcept (pre-pregnancy) care, whereby the prospective mother visits an ob-gyn and gets evaluated and advised on her suitability for pregnancy. It's not a common practice among Kenyans.

She notes that slightly more than half (58 per cent) of pregnant women made four or more antenatal care visits during their pregnancy, an increase from 47 per cent since the 2008-09 KDHS.

Women should also start antenatal clinic as early as possible.

Regular and consistent visits to the hospital as advised by the doctor can also avert stillbirths. This helps to pick any problem (for example, high blood pressure or blood sugar) early on and intervene appropriately.

One should ensure delivery in a hospital or a facility that can offer skilled delivery services. Skilled birth attendants (trained medical personnel) will be able to pick any issues arising during labour and intervene appropriately.

Good diet and adequate rest. A good diet, especially before pregnancy, goes a long way to ensuring a healthy pregnancy. Rest and avoidance of stress as much as possible is necessary. Stress and lack of rest can exacerbate already existing medical conditions, making them worse.

Education is important, especially on the danger signs of pregnancy. There is a safe motherhood booklet given to pregnant women on their first day of clinic visits in most if not all public health facilities.

The booklet, available in English and Kiswahili versions, contains crucial information a mother needs during her pregnancy.

There are usually educational talks every morning by midwives before the start of every antenatal clinic in most if not all health facilities. Then there

are the clinicians who see the expectant mothers. They should be able to educate them as much as possible, despite the minimal time they spend with patients.

HAVING A SAFE PREGNANCY

Measures to take include taking a prenatal vitamin. Essential nutrients, like folic acid, calcium, and iron, are required from the very start.

Exercise is key. Staying active is important for your health and can help you reduce stress, control your weight, improve circulation, boost your mood and sleep better.

Educating yourself is another crucial factor. Even if this isn't your first baby, attending a childbirth class will help you feel more prepared for delivery.

Change of chores should be undertaken. Everyday tasks like scrubbing the bathroom can become risky when you're pregnant. Exposure to toxic chemicals, lifting heavy objects, or coming in contact with bacteria can harm you and your baby. Do lighter chores.

Ensure you track your weight gain. Be careful not to overeat with a mind of 'eating for two'. Don't also eat less.

Eat folate-rich Foods. In addition to drinking 8-10 glasses of water each day, you should eat five or six well-balanced meals with plenty of folate-rich foods like cereals, asparagus, lentils, wheat germ, oranges and orange juice.

Shoe shopping should be on your to-do list. During this period, you might need flat shoes and not heels. And finally,

know when to call the doctor. Always have the doctor's number so that in case you feel anything, you can call him/her immediately.