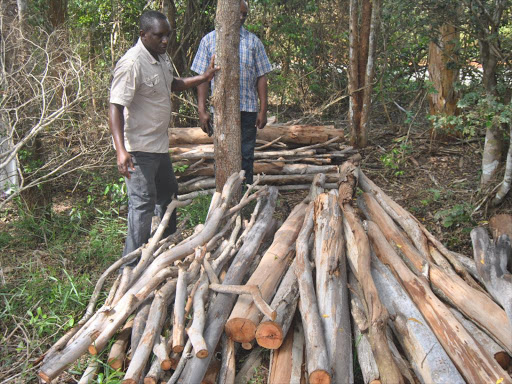 Arabuko Sokoke forest, one of the largest remaining coastal forests in East Africa, is on the verge of extinction, following continuous degradation and destruction of old indigenous trees.

The forest is located in Kilifi county, 110km north of Mombasa. It borders the Mida Creek, a mangrove forest. It may soon turn into a jungle if action is not taken to protect it.

Conservationists have proved with evidence cases of massive logging, charcoal burning and wood carving, which are a threat to the biodiversity of the forest.

Investigations have revealed that there are “well-connected cartels” owning wood workshops, who are logging under the protection of Kenya Forest Service rangers, before transporting the timber to sell in broad daylight.

It is alleged the cartels have orders for hard wood timber and normally find the best quality from the Arabuko Sokoke forest.

Conservationists claim there are tycoons colluding with KFS officials and some locals to cut down idegineous trees merely 200 meters from the road.

Residents working under the Community Forest Association say it’s difficult to pursue the culprits, who are being protected, as they normally threaten them whenever their logging is questioned.

Accounts from different local conservation groups reveal that there is a network behind the destruction that needs to be done away with for the forest to be protected.

Charo Ngumbao, the vice chairman of Gede Community Forest Association, says there are workshops that use indigenous trees to set up their wooden products.

He says the situation is worrying because the slow loss of trees each day has serious repercussions on the environment.

Already, he says tree destruction and scramble by locals to cut down building poles has proved dangerous in Madunguni forest and Mwangea hills.

He says Madununi forest is already gone, and there is serious environmental degradation, while in Mwangea hill, famine has hit the area due to the destruction of trees, as there is no rainfall.

“There are areas we cannot reach. There is charcoal burning, wood carving and logging for timber,” he says

Historically, Arabuko Sokoke hailed from Somalia to Mozambique, but now there are only 420km square due to destruction.

Charo says the KFS rangers are to blame for the destruction as they do not concentrate on conservation, even if they are few.

For over two months, journalists have been investigating the cases of destruction. They witnessed trees being cut and timber transported away through the electric fence that was set by the Authorities in 2007.

Apart from timber, there are other cartels that burn charcoal inside the forest and transport them at night.

There are also other cartels that reportedly carve wood and have built camps deep inside the forest, where they live with their wives and cook food.

During the investigations, it emerged that most of the destruction is done by cartels that are well-connected and do not fear even the Village Development Forest Conservation members.

Peter Mwangi, KFS Forester in Charge of Arabuko Sokoke, says they only allow women to fetch firewood once per month together with

Mwangi, who has been adversely mentioned as among the cartels behind the illegal business, said this during an operation to check snares, which found many traps laid by poachers

He admitted that there are some people who invade the forest to cut down trees and poles for building.

“The number of officers is few. We rely on the community to give us information. The entire forest has no electric fence. Some of the routes are impassible,” Mwangi says.

He says there are plans to deploy rangers to camp in the forest permanently at night to deal with illegal loggers.

Experts say Arabuko forest may be completely gone in five years if action is not taken, a prospect that will have a negative impact on the environment.

Further, the forest is also threatened by the desire for land by residents, as it’s surrounded by the local community.

The bigger threat, however, still remains that of continuous destruction of the indigenous trees that make up the forest.

The destruction of forest is affecting tree cover and resources that are within the forest.

Dr Maarifa Mwakumanya, the Dean of School of Environmental and Earth Science at Pwani University, says Arabuko forest’s destruction is devastating since it has many ecological, economic and social benefits.

People may not feel the impact immediately, but any loss of trees has a great impact, as the rate of generation is very slow.

Experts also have said the effects of climate change are being felt due to the continuous loss of tree cover.

Previously, reports indicate that there were more than 30 wetland areas within the forest, where animals, including elephants, used to drink water, but now there is none.

A few years ago authorities managing the forest were forced to begin setting up water points due to the effects.

“The rate of generation for the trees destroyed is very slow. There are more trees lost than those growing,’’ Dr Mwakumanya says.

In the forest, there are medicinal plants, too, and Dr Mwakumanya says if people keep on cutting trees, they will also disappear.

With the rise in climate change and continuous destruction, temperatures will rise and some trees may not be able to survive.

“We must make sure we claim the Arabuko Sokoke forest. The forest is under destruction. I have seen people carrying poles and timber. If no proper management is initiated, the forest will decrease with time,’’ he adds.

Dr Mwakumanya called for concerted efforts among civil society, government agencies, youth groups and schools to come together to see what can be done.

He also suggests that communities surrounding the forest be equipped to begin tree farming.

“Residents can create a local ecosystem. They have a role to play, especially those living around the forest,’’ he says.

Curently, he says, it is evident that it’s only within the forest that there is a record of high rainfall.

The threats of the destruction, he says, will contribute to increasing drought and famine in the county.

Some threats that will affect the forest indirectly, he says, include migration of the unique birds species. Tourists will go to other destinations, and there will be constant beach erosion.

“In 50 years, the area, which is 60 metres from the shoreline, will be at zero. The impact is great,’’ Dr Mwakumanya says.

Francis Kagema of Nature Kenya, which is in the forefront of promoting conservation, is concerned about the ongoing illegal logging and charcoal burning.

He says the culprits should be arrested and the forest protected.

Kagema says it is worrying that nowadays, elephants feed on artificial water points.

“Elephants have become aggressive in the forest nowadays, due to the disappearance of water,” he says.

During a tour of the forest recently, Stephen Nzai Kombe, the chairman of Mkongani Village Development Forest Association, said in their area, there is a man burning charcoal inside the Forest.

“We reported to the Kenya Forest Service but it is difficult to get him. At one time they raided his home but did not get anything,” he says.

To him, the Arabuko Sokoke is seriously under threat, and the cartels behind the illegal trade are acting with impunity.

GCFA’s Ngumbao said they at onetime found a vehicle with the wood carving of an indigenous tree, ‘Mhuhu’.

He said community forest scouts, who play a major role in conserving the forest, were threatened by KFS rangers.

Some of them are currently living in fear of exposing the ills of the rogue KFS rangers behind the illegal trade.

“The forest is on the verge of extinction. In the near future, if action is not taken, it will be no more,” Ngumbao says.

To him, Arabuko is a major toursm attraction due to the biodiversity, rare birds’ species, among other unique species that are only found in the forest.

However, due to the disturbance of the forest, some species are beginning to relocate to other areas for survival.

Ngumbao describes Arabuko Sokoke forest as an island surrounded by a community that depends on it for survival.

Through the CFA, they have devoted themselves to protecting the forest, but some of the locals engage in the illegal trade.

Sadly, on many occasions, Ngumbao says they have arrested people and vehicles carrying illegal timber, but the culprits ended up walking away scot-free.

Normally they are supposed to report any culprit found destroying the forest.

“We impound vehicles and arrest people, take them to the security officials, but action is not taken. The culprits are released, because they are friends of the law enforcers,” he says.

Ngumbao says it’s high time that any officer found engaging in corrupt deals that are threatening the forest is arrested and charged.

He calls on the authorities to prosecute the rogue officers supporting the illegal trade, as transferring them does not provide solution.

“Arabuko Sokoke forest is an important forest recognised worldwide. We must ensure it is protected. If an officer is found engaging in corruption, he should be arrested. Transferring the officer does not provide a solution,” he says.

Jackson Said Yaa, chairman of VDOCC, is a victim of threats from KFS. He recalls how he found an officer cutting down trees in Kararacha.

He says the officers were found by women fetching firewood, who alerted him.

Yaa says even the forester in charge was responsible for giving out permits.

“I tried to pursue the matter but was chased away by the police. The KFS boss threatened me,” he says.

Abbbas Sharif, from Arabuko Sokoke Adjacent Dwellers’ Association, says it’s unfortunate the manner in which KFS is reaping from the forest which should be protected.

“KFS has been collecting money from wood workshops. They have failed to protect the forest,” he says.

Sharif says there should be a plan to gazette the forest into a national park, because the KFS has failed to protect it.

When contacted for comment, senior authorities from KFS dismissed claims that the forest is under threat, despite being told there was evidence showing the nature of destruction.

Nafasi Mfahaya, the ecosystem conservator in charge of Kilifi county, called all the foresters in charge of the different clusters of Arabuko Sokoke Forest to clear the air on the allegations.

During the briefing, CFA official Fredrick Kutakasa admitted that there were cartels involved in illegal logging in the forest.

He said his life was also threatened after he started pursuing a poacher a few years ago.

Mfahaya, who was transferred recently, said if there are cartels, the community has to be involved.

She accused NGOs of spreading propoganda.

“There are cartels being used to show the forest is not safe. As Kenya Forest Service, we are doing our best to protect the forest, we are still safe,’’ she said.

The conservator said she was confident the KFS would be able to manage and protect the forest.

Community members say the forester was colluding with cartels to sell firewood cut from indigenous trees.

The pieces of wood were hidden less than 100 meters from the road.

Some of the species in the Arabuko Sokoke forest include The Clarke’s weaver, which is completely endemic to the forest.

Others are Sokoke Pipit, Amani Sun Bird and Spotted ground thrush, which are only found in Arabuko Sokoke forest and in another forest fragment in Tanzania.

The forest is also home to golden-rumped elephant shrew, elephant shrew the size of a rabbit, which is the most noticeable of the park’s endemic mammals.

There are also the Sokoke bushy tailed mongoose, Aders’s Duiker, which is found only at Arabuko and Zanzibar, the Savanna elephants, African Civets, Sokokes, Baboons and Vervet monkeys.

Arabuko Sokoke needs everyone to save it and ensure it is protected, or else the repercussions will be dangerous in the near future.