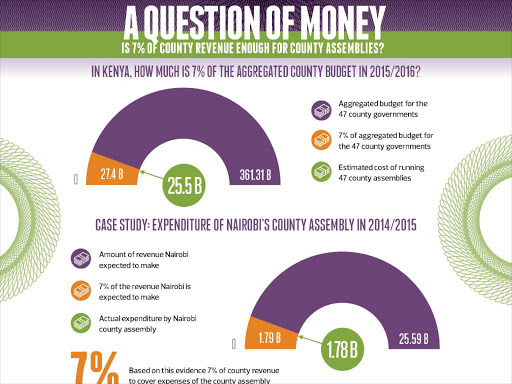 In light of increasing public outcry against frequent foreign trips and other questionable spending by members of county assemblies, the National Treasury has restricted MCAs’ ability to revise budget estimates and access county revenue for their expenses.

The regulations, published under the Public Finance Management (PFM) Act, were gazetted in mid-last year but only came into effect recently. With the upcoming tabling of the budget in Parliament on April 30, county assemblies (CAs) have drummed up opposition to the rules. In the past few weeks, they have criticised the constitutionality of the restrictions and questioned whether they undermine devolution structures.Various CAs’ representatives claim these regulations inhibit proper oversight on county public finances, as mandated by the constitution.

However, these regulations seem to have been set in place to limit the wasteful expenditure that counties have become so notorious for by setting clearer guidelines on budgeting and management of county public finances.

The two contentious sections in the regulations spurring these debates state that 25 ( 1 ) f: the approved expenditures of a county assembly shall not exceed seven per cent of the total revenues of the county government or twice the personnel emoluments of that county assembly, whichever is lower, and 37 ( 1 ): Where a county assembly approves any changes in the annual estimates of budget under section 131 of the Act, any increase or reduction in expenditure of a vote, shall not exceed one per cent of the vote’s ceilings.

Opposition to the rules has escalated as the budget formulation process comes to a climax.

Claims by CA representatives that Treasury CS Henry Rotich is creating laws are unfounded, as he followed due process in tabling the regulations in Parliament in March last year for approval. The PFM Act clearly provides an allowance for the CS to create regulations under the act generally, and specifically to curb wasteful expenditure, and both Houses of Parliament must approve these within 15 sitting days, otherwise, they are assumed to be approved automatically.

According to the Hansard, the Senate considered the regulations with regards to county finances and approved them.This ongoing debate, therefore, comes too late and begs the question why the lawmakers gave approval for the regulations to be gazetted if they went against the spirit of devolution.

What is more surprising is that the Senate did in fact make specific recommendations to amend the sections above but it seems that they proceeded to approve the regulations with the initial limitations.

In relation to the first contentious section, it is worth noting that, based on the current financial year budget, CAs would have expected a maximum allocation of approximately Sh25.3 billion, equivalent to seven per cent of the aggregate budget estimates for the 47 county governments (amounting to Sh361.13 billion). Further, analysis by International Budget Partnership (K) on how much it costs to run a county suggested CAs should spend approximately Sh27.4 billion in the 2015-16 period (approximately 7.6 per cent of the aggregate budget for the 47 counties). If we take the case of Nairobi, the county government in 2014-15 budgeted to spend Sh25.59 billion, translating to an expected seven per cent allocation of Sh1.79 billion to the county assembly. When compared to the actual budgeted expenditure by the Nairobi CA in 2014-15, as provided by the Office of Controller of Budget, the seven per cent allocation is prudent, as the county budget actually allocated Sh1.78 billion towards the CA. Assuming a similar allocation pattern across counties, the seven per cent limit could very well be justified. However, estimates based on twice the personnel emoluments may be lower than the seven per cent limit for some counties, and this could bring the expenditure cap lower.

The Star erroneously reported that Section 25 ( 1 ) f. leaves the CAs without say over 93 per cent of county budgets. This interpretation is wrong, as the budget process, as stipulated in the PFM Act, clearly spells out that CAs must approve and pass the prescribed allocations for the county to spend in that fiscal year. This, in effect means no county can spend monies that are not approved by CAs, thus giving them 100 per cent oversight or a significant say in the matter of how county monies should be spent.

The second contentious section in the regulations speaks to the limits to increasing spending in each vote by one per cent when approving budget estimates. A vote here could mean the budget allocation to health, infrastructure, water services and so on. Jason Lakin in his article, succinctly points out why this could be problematic, depending on the interpretation of the section.

While this section may seem severely limiting, again the budget process as prescribed in the law provides CAs, as well as the public, other opportunities to make recommendations to budget ceilings per vote or programme. However, the CAs correctly point out that it is their constitutional right to amend the budget after it is tabled in the assemblies and before it is passed.

While we cannot conclusively determine that indeed these regulations undermine devolution, CAs should instead hold the Senate to account for passing them, when they had the opportunity to protect counties’ financial independence at the national level.