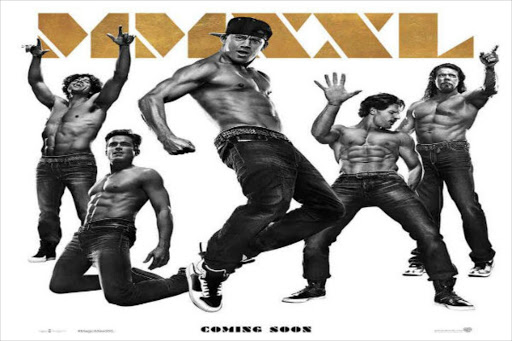 Magic Mike is not a movie about a story with the same boring plot: boy meets girl, something happens, boy ends up with girl. No. Magic Mike is a sequence of scenes that follow hot men, with rock hard abs who pop, lock, and drop it. Magic Mike XXL is the sequel to the first installment Magic Mike (2012). XXL picks up when the stripper turned carpenter Mike (Channing Tatum) finds himself alone and the business he left his lucrative stripping career for is not as wonderful as he had imagined. One day Mike gets a call from his old crew: Ken (Matt Bomer), Big Dick Richie (Joe Manganiello), Tarzan (Kevin Nash), Tito (Adam Rodríguez) aka the Kings of Tampa. He decides to go with them to Myrtle Beach for a stripper convention. The group decides that the event will be their last act together before they go their separate ways. And for their final act they have to go out with a bang!

But first, they have to get to Myrtle Beach. On the way their emcee, also their driver, Tobias (Gabriel Iglesias) gets them into an accident, where he is the only person injured. They leave him in hospital and go on to find their own way. Mike takes them to his old workplace run by the sultry Rome (Jada Pinkett Smith). Mike has to convince Rome to emcee for them. On their way to Myrtle Beach they also come across a group of lonely housewives led by outspoken Nancy (Andie MacDowell). Nancy lets them borrow her husband’s car to get the rest of the way.

In the cinema you could almost hear the bated breath of the audience as they wait with anticipation for the next dance number. Unlike its predecessor, XXL is way better having done off with Dallas’s character (Mathew McCougnhey) and the dance routines are out of this world. The last 20 minutes of the movie is where things get exciting. Each crew member is assigned their five-minute routine and boy do they bring it!

The movie is good, but there are some aspects that fell flat. The most unlikely one was the love interest for Mike. The story could have done without her. In fact, having three women (Banks, McDowell and Smith) who exude demanding on-screen presence seemed to outshine all other female actors. This says a lot since the movie used over 900 female extras! The film also stars Elizabeth Banks, Donald Glover, Michael Strahan and Stephen “tWitch” Boss.

XXL is not a movie to watch with someone you are not comfortable with. This is why it makes the perfect movie for a girls’ night out.