They must abide by the law and seek animal movement permits

•The national government has partnered with the Laikipia county government in distributing animal feed, medicines, and other supplements worth Sh17 million. 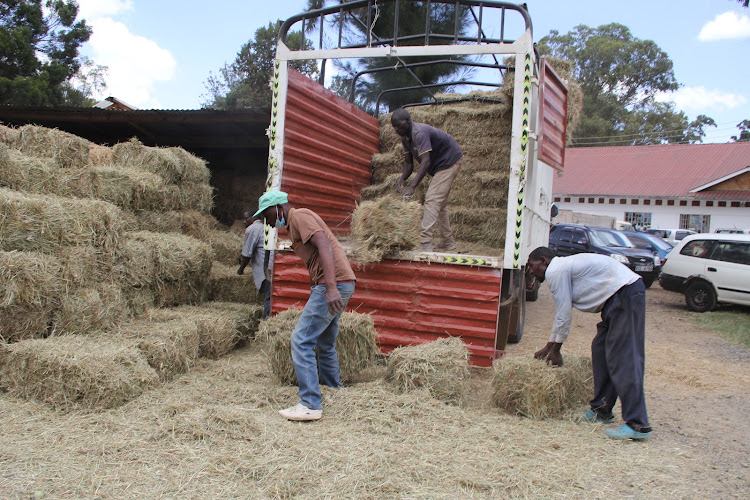 Officials have warned Laikipia county pastoralists against migrating to private lands in Mt Kenya and Aberdare forests in search of pastures and water.

Speaking during the launch of hay distribution in the ASAL region, Kanyiri said pastoralists from  Laikipia North and West had started migrating with thousands of animals to areas with greener pastures.

The national government has partnered with Laikipia county in distributing animal feed, medicines and other supplements amounting to Sh17 million.

“The government has several measures of cushioning the herders against drought. They include offtake programmes in whish 400 cattle already have been bought," Kanyiri said.

He said there were plans to buy another 6,000 head of cattle from the herders, slaughter them and distribute the meat to people suffering by famine.

In addition, the county commissioner said the national government had identified more than 10,000 households that will be receiving a monthly stipend of Sh3,000 per month.

“We are also looking at working with the National Drought Management Authority in distributing water to learning institutions and the affected households,” Kanyiri said.

Water, Environment, and Natural Resources boss Peter Matunge said many animals had died  and the county government was offering the feed to cushion farmers from further losses.

"Livestock herders from Mukogodo East, Mukogodo West, Sossian, Rumuruti and Salama wards are the most affected by the drought and that is why we are giving them with feed,” Matunge said.

He said for the last four months, the county government has been rehabilitating boreholes and trucking water to needy areas.

Drought ravages villages in much of the country after long rains fail
R.Valley - Page 30
1 year ago

Government sets aside Sh1.2 billion for drought intervention in November

There is a Hunger Safety Net with regular transfer of funds to support 100,000 households.
News
1 year ago

Matiang'i says Immediate enhancement of the ongoing security operation will be undertaken in the affected area
Counties
1 year ago
Post a comment
WATCH: The latest videos from the Star
by ELIUD WAITHAKA
R.Valley - Page 30
28 November 2021 - 23:00
Read The E-Paper