I am ready to face Ruth Odinga, says UDA's Ayugi

•Ayugi received a direct ticket while Ruth Odinga clinched the ODM ticket after getting 23,665 votes against her challenger Rose Omondi who got 13,685 votes.

•The Kisumu businesswoman called on aspirants to conduct peaceful campaigns. 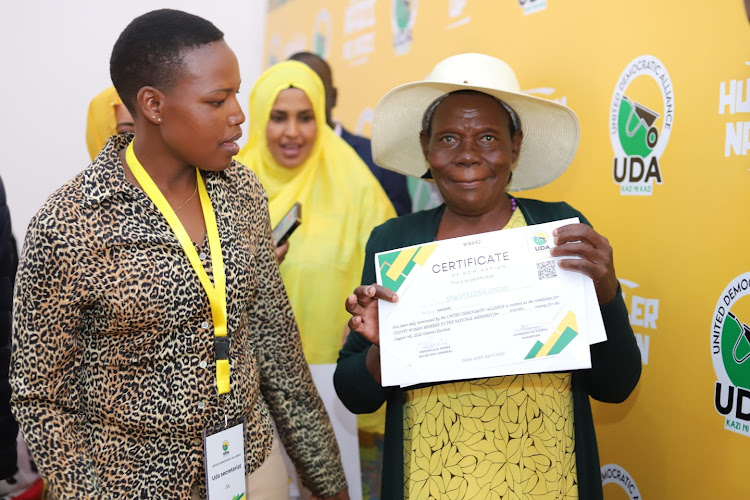 She also appealed to the people of Kisumu to reject calls for six-piece voting.

Ayugi said she was ready to face Ruth Odinga of ODM.

The aspirant spoke after receiving her nomination certificate on Wednesday.

Ayugi received a direct ticket while Ruth clinched the ODM ticket after getting 23,665 votes against her challenger Rose Omondi who got 13,685 votes.

The Kisumu businesswoman called on aspirants to conduct peaceful campaigns.

“I appeal to all politicians to sell their policies to the people. Voters should reject politicians who incite them to cause violence and those who misuse youths, especially boda boda operators,” Ayugi said.

She said she will focus on empowering women and girls.

Incumbent Rosa Buyu will not defend her seat. She will instead contest the Kisumu West parliamentary seat where she will face Olago Aluoch.

Melida Auma is the UDA nominee in Homa Bay while Pamela Adhiambo will contest in Siaya and Pamela Auma in Migori.

Gunshots as Ruth Odinga is caught in chaos during ODM primaries

Ruth Odinga was leaving the polling station when the chaos started.
News
2 months ago

Ojienda bagged the ticket after garnering 39, 336 votes.
News
2 months ago

"Direct tickets don't work for me, I'd rather we go to the ballot, " Ruth Odinga said.
News
2 months ago
“WATCH: The latest videos from the Star”
by ANGWENYI GICHANA Chief Correspondent, Nyanza Region
Nyanza - Page 29
28 April 2022 - 22:00