Says Azimio like polygamous family where every child goes to their own house after sunset.

• Says he is duty-bound to promote his Orange party, especially in his backyard.

• Junet said all the 26 parties must be ready to battle for the lower seats. 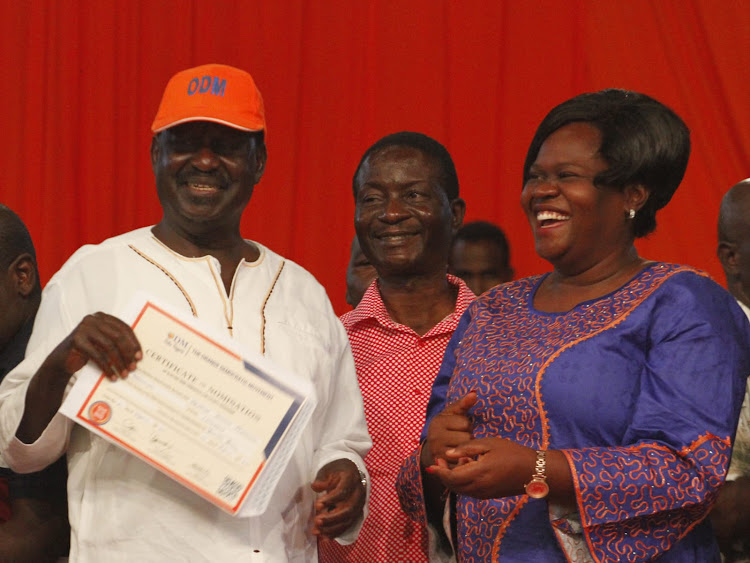 He said it is his duty to promote the Orange party and make it the biggest outfit in the country.

The party leader has in recent days been calling on party supporters, especially in his traditional bases, to vote only ODM candidates in the August 9 general elections.

Raila on Wednesday reminded his supporters that the umbrella coalition is like a polygamous family where every child retreats to their own house after sunset.

He said ODM supporters especially in his strongholds have no option but to rally behind the party candidates to ensure the outfit claims its rightful share in the bigger coalition.

As the ODM party leader, Raila said, he is duty-bound to promote his Orange party, especially in his backyard.

“Azimio is like a big home with 26 houses and in the coalition there are children who every morning go to the field to play but at sunset every child goes back to their house,” Raila said.

The Azimio flag bearer said he will be at the forefront in calling for supporters to vote for all Wiper and Jubilee candidates when he is in Eastern and Central respectively.

“When we go to Jubilee zones, I will tell them to vote Jubilee candidates,” Raila said.

"There were people who were ODM aspirants and after losing the polls they went independent. Why couldn’t they consider an independent ticket as their first option?" he posed.

ODM director of elections and Suna East MP Junet Mohamed backed Raila, saying all the 26 leaders in Azimio are free to campaign for their parties.

Junet said the parties are only together in the presidency but must expect to engage in friendly fire in the battle for lower seats.

“Under Azimio there is no problem if party leader is supporting his party candidates. Even Uhuru has a right to support their candidates. The only place we are not fighting is at the presidency but down here we must promote our party,” Junet said.

The leaders spoke during a function to give tickets to all ODM nominees who will fly the party’s flag in August.

Speaking to journalists after the meeting at Jaramogi Oginga Odinga Foundation, Azimio presidential campaign board chairman Ndiritu Muriithi said it was part of their numerous strategic meetings ahead of the August contest.

“As is normal, we look forward to vigorously campaigns to deliver a landslide and decisive win in August,” Muriithi said.