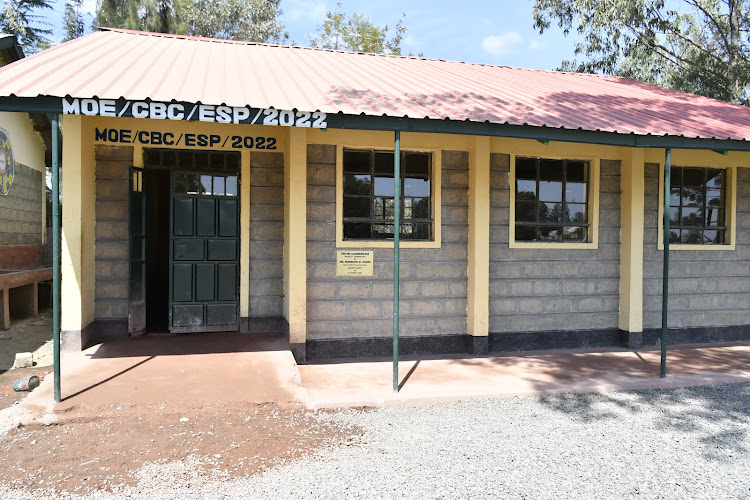 JUNIOR SECONDARY: One of the newly constructed classrooms at Milimani High School in Naivasha under the Competency Based Curriculum system, which is meant to accommodate students transiting from Grade 6 to junior secondary schools.
Image: GEORGE MURAGE

Parents, teachers and stakeholders now want the number of classes under the Competency Based Curriculum doubled.

They said that the current number is too low to accommodate students joining junior secondary schools and those living Std 8 for Form 1.

The government has embarked on the process of constructing 10,000 classrooms under the CBC through a technical committee on the system that had proposed 30,000 classrooms.

According to James Muiruri from Elimu Bora Foundation, close to three million students would be joining both secondary and junior secondary schools in January.

He termed this as a major crisis mainly for stand-alone secondary schools which would be hosting thousands of the students in the junior schools.

“In January, 1.6 million students will be joining Form 1 under the 8-4-4 system while another 1.2 million will be joining the same schools under CBC,” he said over the weekend.

Speaking in Naivasha during a consultative meeting over the weekend, he termed the 10,000 classrooms constructed by the government as a drop in the ocean.

“We support the ongoing programme to change the school’s curriculum but there are so many challenges that the government has pushed under the carpet,” he said.

This was echoed by the Secretary General of the National Parents Association Eskimos Kobia who said that many schools had benefited from two or three classrooms.

He gave an example of Mirera High School in Naivasha which had one of the largest numbers of students in Nakuru county.

“This school that has more than 1,000 students is expected to welcome Form 1 students and tens of others under CBC come January, yet it has only two new classrooms,” he said.

Kobia attributed the delay in completion of the CBC classrooms to the amount paid per unit by the government of Sh788,000 terming this as too low.

Speaking earlier, director of education in Nakuru county Fredrick Osewe admitted that the issue of cost per classroom had been raised and had been addressed by the ministry.

He added that of the 452 classrooms allocated to the county, 216 had been completed in the first phase despite an outcry over the construction cost.

“Currently the construction of 236 classes in the second phase is at an advanced stage and we expect this to be ready on time to accommodate the students from Grade 6," Osewe said.

Education CS says projects that should take a day can drag on even for seven days.
News
2 months ago

Second phase of CBC classes to be complete by Friday

He said 300 units are remaining to attain 100 percent completion.
News
2 months ago