108 people tortured by police in past six months — report 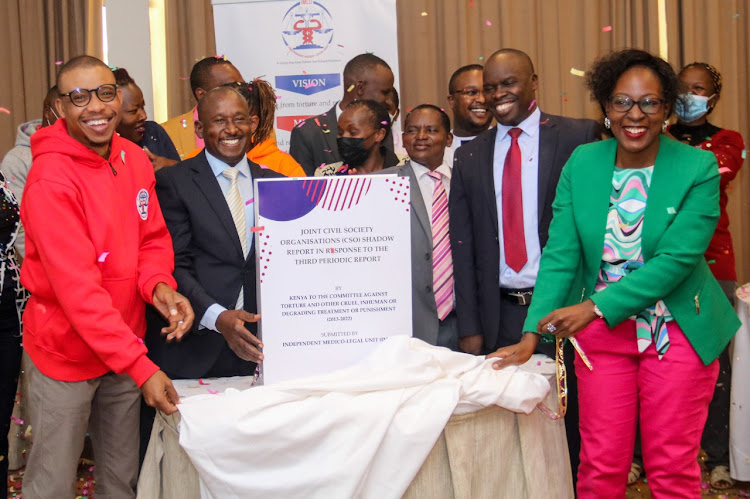 HUMAN RIGHTS VIOLATION: IMLU board member Dr. Kalebi Ahmed, executive director Peter Kiama, police superintendent Jared Ojuok and Beverine Onyango during the launch of the CSO shadow report alongside celebrations of the UN International Day in support of the victims of torture at a hotel in Nairobi on Monday, June 27.
Image: WILFRED NYANGARESI

Some 108 people are recorded to have been tortured and their rights violated by police since the beginning of the year.

Of these, 65 were cases of torture, cruel inhumane and degrading treatment, while 36 were extra judicial executions and seven were enforced disappearance.

The data recorded by the Independent Medico Legal Unit shows 91 of the victims were males and 17 females.

The report was presented by 21 civil society organisations as the world marked International Day in Support of Victims of Torture on Monday.

John Ouma (not his real name) is among the 108 people recorded by IMLU. Ouma was getting ready to leave for work when two police officers knocked on his door in Mundika, Busia, on April 14.

He had previously had an altercation with a neighbour, whom he claimed threw herself at him on allegations that he had been gossiping about her.

“She dared me to beat her up while her other relatives screamed. I was scared and attempted to downplay everything but she went on screaming and hurling insults at me,” Ouma told the Star.

However trouble started when Ouma asked an officer who took his phone to hand it back after he was locked up at a police post in Esikulu, Busia.

“The enraged officer landed on me with kicks and blows swearing to teach me the law. By the time he was done, I was bleeding from the nose, mouth and my entire body was in so much pain,” he said.

Ouma said when other people questioned why the officer was hurting him, he (the officer) threatened them.

He was locked in the cells till evening when he was transferred to Busia police station.

“My family was not allowed to see me. A friend who came to see me wanted to take my photo but he was sent away with threats,” Ouma said.

He would later be charged with assault and resisting arrest, which was stated as the reason for the chest, head and back injuries he sustained.

IMLU director Peter Kiama said there is an increased number of cases of torture with slow prosecution of perpetrators.

“From this data, we regrettably note that 84 per cent were men. This continues to buttress the notion that men remain the most targeted.

"More so, from our data, the females hardship is reported based on strict social mores. We rebut that this must not be accepted as the normal scheme of things,” he said.

Kaima said the perpetrators of 77 per cent of the cases of torture were the General Duty Unit officers from Kenya Police Service.

"The frameworks provide that victims of torture have an enforceable right to fair and adequate compensation, including the means for as full rehabilitation as possible,” Kiama said.

The director, however, said despite substantive legal frameworks and verifiable findings of cases of torture and related violations, most Kenyans continue to languish in the pain of past cases of torture with no action taken.

IMLU asked the government to provide budgets and issue a statement for all the unpaid declaratory amounts in concluded torture cases as a form of effective remedy.

“The government should provide a public statement on the current status of investigations of all torture cases with formal complaints lodged across the country.

"Also, a public apology to all victims of torture and their families,” Kiama said.

In a video posted by the Survival International group, fired shots can be heard as the natives flee.
News
5 months ago

Police officer to be arraigned over civilian murder — IPOA

Omwacha was allegedly assaulted by the police on  February 19, 2019.
News
5 months ago