Rape culture is where rape and other sexual violations against women are normalized, glamorized

• Rape happens when someone didn’t consent to engage in sex.

• The act may be carried out by physical force, coercion, abuse of authority and in situations where a person is incapable of giving valid consent. 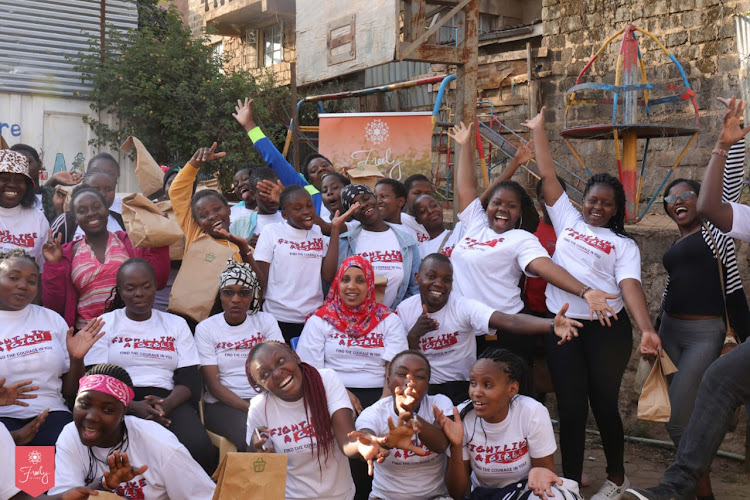 A section of Kibera girls whom have undergone self-defence training to prevent sexual violence
Image: Courtesy

Are we normalizing rape?

One in three female victims of completed or attempted rape experienced it for the first time between the ages of 11 and 17 years, data from National Sexual Violence Resource Center says.

Rape happens when someone didn’t consent to engage in sex. The act may be carried out by physical force, coercion, abuse of authority and in situations where a person is incapable of giving valid consent. This could be when they are unconscious, incapacitated, have an intellectual disability or are below the legal age of consent.

Rape is a form of sexual violence and is recognized as a crime under Kenyan law. According to the Sexual Offence Act, No 3 of 2006-Kenyan Law, any person who attempts to unlawfully and intentionally commit an act in which causes penetration with his or her genital organs is guilty of the offence of rape and is liable upon conviction for imprisonment for a term which shall not be less than five years but which may be enhanced to imprisonment for life. Why then is rape culture so common in the face of such legislation?

Rape culture refers to a society and environment in which rape and other sexual violations against women are normalized, glamorized, excused, and the community and where victims are being blamed for their own violations.

Rape culture hence disregards women’s rights and safety and has pressured women to sacrifice their freedom and opportunities in order to stay safe, even when no place in this world has proven to be completely safe for women and girls. Rape doesn’t only happen in dark alleys or only perpetrated by strangers! It’s happening in our offices, schools, places of worship, streets, in broad daylight and even at home. Often, the most intimate of friends and family members are perpetrators of sexual violence.

Rape culture affects all women making us live in fear of being violated, and assigning blame to survivors. Rape culture is more than just sexual assault. It strips women of their power. This culture is deeply rooted in patriarchal beliefs that are couched in morality, tradition, power, control and the need to ‘protect’ women making it easy to blame the victim.

Victim blaming is a way of manipulating the victims and other people and it reflects in statements such as: “she was drunk”, “her clothes were revealing”, “women say ‘no’ when they mean ‘yes’. Victim blaming also presents as trivializing sexual assault with statements such as “boys will always be boys” or even acceptance of sexual harassment, especially in public spaces. A friend was telling me just the other day how she was being harassed by two men unknown to her in a public matatu full of passengers and all some did was murmur “watoto wa siku hizi”. She was helpless and felt the people around her blamed her for the assault.

Rape culture is also glorifying gendered sexual violence in movies where men are portrayed as dominant and sexually aggressive, while women are submissive and timid. It is slut shaming while objectifying women bodies, believing that only promiscuous women get assaulted and refusing to take rape accusations seriously.

By treating sexual violence as a norm and blaming victims for their own assaults, we are creating an environment that protects the perpetrators, promotes impunity, shames victims and teaches women how to avoid getting sexually assaulted rather than improving the behavior of potential perpetrators. Blaming victims does not just fail to prevent sexual assaults, it constrains women’s lives and limits their opportunities.

When women give up social and economic opportunities in order to stay safe, it affects a woman’s growth in general. Placing the burden of avoiding sexual assault on women grants sexual predators the power to set boundaries on women’s lives. This is degrading and violation of a women’s rights.

Ending rape culture is a collective responsibility as it affects all of us regardless of our gender identity. Stopping victim blaming and listening to survivors would play a major role in ending this culture. Rape affirming beliefs are embedded in the language we use to refer women through music and sexually explicit jokes.

There’s thus a need to have zero tolerance for sexual harassment and violation in any environment we thrive in. This also means calling upon our leaders to uphold a zero-tolerance policy in every institution whilst making sure the perpetrators are held accountable by prosecuting sexual violence cases. Sensitization on the effects of sexual violence can also be done through the media as we hold community conversations on how to end rape culture.

Sexual assault is never the victim’s fault. Abuse in reality is a conscious choice made by the abuser.

Post a comment
WATCH: The latest videos from the Star
by RISPER SAROTA
Star Blogs
21 November 2022 - 05:00
Read The E-Paper