There is need for the establishment of a task force on blue economy.

• Kenya has committed to pursue an economic growth and development model that ensures that natural assets are exploited responsibly.

• There are several laws and bills enacted to promote green growth and blue economies, among them the Environmental Management and Coordination (Amendment) Act 2015, 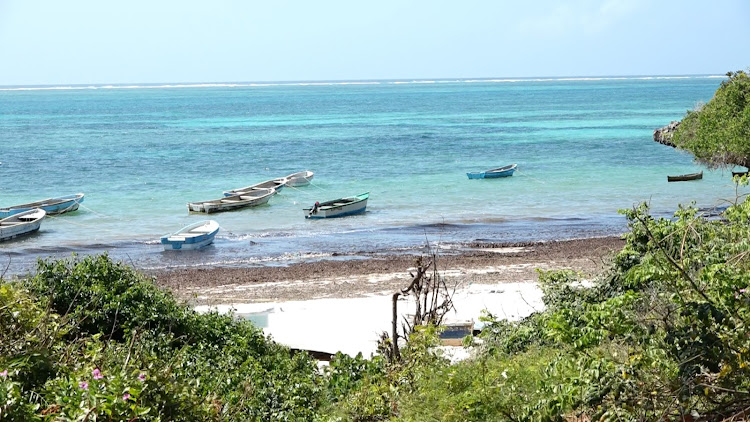 A section of the Indian ocean at the Mayungu landing site in Malindi subcounty of Kilifi county.
Image: ALPHONCE GARI

Kenya's efforts to actualise the circular economy principle which is part of the Sustainable Development Goals needs a push or else the great promises and strategy papers will be stuck on shelves.

Advanced steps by a few national institutions and non-state actors have happened towards that direction but the absence of the task force on blue economy at the national level to inspire the push for a nexus between the country’s climate change activities and the blue economy is cause for concern.

The development of the Blue Economy Strategy paper and establishment of a task force on the same by Kenya are an indication of the country’s commitment to utilising its marine resources. The country hosted a global conference in November 2018 on the Blue Economy in Nairobi as a way of showing commitment to the SDGs. The government followed it up by establishing the Coast Guards and Marine force to patrol water borders and ensure proper uses of the marine resources.

Kenya has committed to pursue an economic growth and development model that ensures that natural assets are exploited responsibly. Additionally, there are several laws and bills enacted to promote green growth and blue economies, among them the Environmental Management and Coordination (Amendment) Act 2015, Vision 2030, Energy Act 2012 and Green Economic Strategy and Implementation Plan (GESIP) 2016-2030.

The ocean constitutes 42 per cent of Kenya’s land cover with possibility of investments in seaweed farming, cage farming, corals, tourism and carbon credits where institutions such as the Kenya Maritime Authority, Kenya Marine and Fisheries Research Institute, Technical University of Mombasa and many county governments have included blue economy within their departments.

The World Bank notes that Lake Victoria, Africa’s largest freshwater lake that draws its lifeline from River Nile supports over 40 million people across three countries (Kenya, Tanzania and Uganda) and its resources fuel the economies of the three countries. The region's inhabitants rely on the lake for all aspects of their lives, including fishing, agriculture, and industrial applications. However, Earthzine notes that the increasing population has negatively impacted water quality through agricultural and industrial runoff and sewage. The fishing industry is expected to be generating over Sh120 billion revenue.

For the country to fully exploit the blue economy while at the same time innovating around climate change adaptation, it must formulate and implement measures to deal with risks such as depletion of resources and degradation of ecosystems through over-fishing or destruction of habitat, pollution (including industrial wastes), endocrine disrupters and oil spills; invasive species that can compromise industrial cooling systems, overtake ecosystems or interfere with aquaculture through toxicity or reduction of yields; coastal erosion exacerbated by storm surge, wind hazards, waves, currents and ice in the broad range of extreme environments where marine operations are conducted.

Kenya's Blue Strategies recognises investing in the following building blocks to increase profits for producers, save money for consumers and improve the environment. Economic efficiency, low carbon development, investing in natural capital and ecosystem services and efficient markets that internalise all social and environmental costs. Other building blocks that are equally important and are part of the strategy are transport, water infrastructure systems, affordable and environmentally friendly housing, equitable access and governance of natural resources, environmentally aware citizens and green consumers, new measurements of wellbeing and sustainable economic welfare that are publicly available.

In recent years, circular economy has become a priority income generating sector as seen from the importance being attached to the blue economy by countries around water bodies including in the Nile basin. Countries in the region including Kenya have realised that embracing a more sustainable approach to their development will generate benefits in terms of environmental security, human well-being and increased competitiveness thus shaping opportunities and options far into the future.

Experts have advised that the region's path to the realisation of the SDG 12 lies in responsible consumption and production that promotes the principles of reduce, reuse and recycle and Paris Climate Change Agreement. Around the lake basin, circular economy is mainly achieved through water recycling and reuse through wastewater treatment and management, irrigation farming, biogas production, hydropower production and water purification and consumption.

For instance, a greening of the port of Mombasa is happening with very positive prospects through a joint project of the Maritime Technology Cooperation Centre-Africa (MTCC) that brings together Jomo Kenyatta University of Agriculture and Technology (JKUAT), Kenya Ports Authority (KPA) and the Kenya Maritime Authority (KMA).

We need to see more leadership from the task force on blue economy and other players in the sector as we help communities around these resources expand income generation opportunities while at the same time adapting to current climate change challenges.

Post a comment
WATCH: The latest videos from the Star
by VICTOR BWIRE
Star Blogs
26 October 2022 - 16:19
Read The E-Paper