• It is the great promises and disturbing paradoxes observed this close to Elections on the chapter six that subject the very idea of voting and free elections to disrepute.

• Ultimately, resigning  will give a corrupt regime to hire a worse choice not a more ethical replacement. 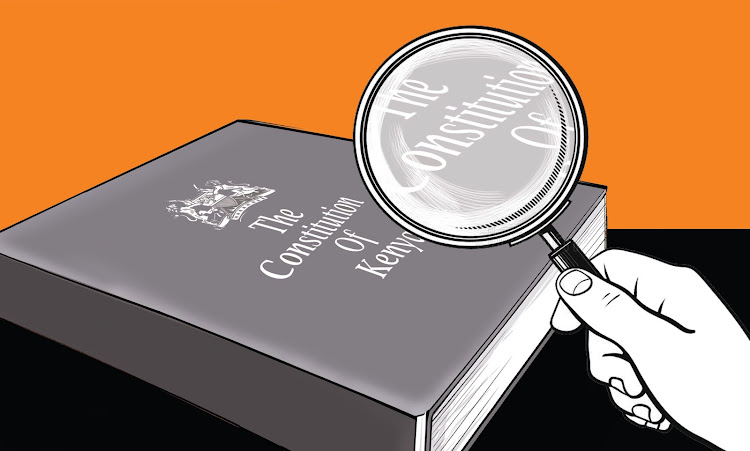 When it comes to Chapter Six of the Kenyan Constitution, Kenyan voters must know that “the beautiful ones are not yet born” as Ayi Kwei Armah will put it, because there is enough blame to go round.

Support Chapter Six of the Constitution, it is a good and noble chapter but it is the rhetoric of its enforcement and the hypocrisy of its “new friends “that I abhor.

In a number of situations, the politician view of “otherness” where their team is moral and their opponents are corrupt is utopian and deceptive.

I'm not convinced that Azimio coalition are more Catholic than even the Pope having misunderstood the correctness of their actions in connection to the Chapter Six of the Constitution. In my consideration, the kernels of inferior morality can be found in both Azimio and Kenya Kwanza coalition?

It is the great promises and disturbing paradoxes observed close to elections on the chapter that subject the very idea of voting and free elections to disrepute.

Recently through consideration of Chapter Six, we have seen how government officials like the minister for Internal Security use the chapter to judge politics and political candidates from a moral high ground.

Chapter Six is used to justify government actions from the moral ground when they become convinced in the correctness of their bipartisan and alarmist statements to Kenyan voters on the danger of some political candidates generally.

Importantly, this is suspect given the rotten Kenya history of suppressing political rights. It is my opinion that Chapter Six can only succeed within the general culture of constitutionalism and not as a political campaign or elections slogan.

At the same time, the endless expansion of the government partisan interest in this election gives the government a moral pedestal against those they consider to be great thieves and “wash wash” agents running for political offices.

The ultimate goal is for the government to appeal to Kenyans to vote for some politicians and weaken the very idea of the sovereignty of the people that Chapter Six was meant to protect. This is meant to dilute the emancipatory power of Article 38 on political rights.

If the government can justify that the voters are misled and the power of the ballot is in the wrong hands of masses in order to justify human rights violations, restrict political rights and freedom of voters in the upcoming August elections.

The right to self determination through free exercise of votes should not be undermined or degraded in the name of Chapter Six which was otherwise a great tool fling in the wrong hands.

There is no debate that Chapter Six of our Constitution is one of the most important chapters in our transformative Constitution.

It is the unique chapter that was meant to trace the corrupt footprint of our politics and corrupt leadership to make Kenyans avoid poor leadership.

It is the chapter that was steeped with hope beside the devolution chapter. The hope of Kenyans for a new society and all Kenyans considered it a loaded gun ready to fire at any bad leader.

What is a noble chapter in the Constitution should not be used to undermine the sovereignty of the people. The writing is to warn the self-assured politicians and the government that they must avoid rhetoric and not use Chapter Six as a means to political end.

Political hygiene can only be restored in Kenya when voters are convinced that no political camp is playing ping pong with Chapter Six.

Chapter Six is becoming a confused narrative with all the moral and immoral individual and institution use to justify their actions in this electioneering season.

Government officials, civil society, partisan politicians, moral and immoral people, professionals and all are claiming that they are concerned about the threat of elected leaders who are not fit to hold office with integrity.

No student of jurisprudence and Constitution can fail to locate Chapter Six and its misuse to the problem of unfair enforcement of the law. How do you balance the knowledge that in Kenya, even a moral choice to resign for a small infraction will just enable the government to appoint a replacement who is even ten times worse?

To follow the law on Chapter Six is not a legal issue but a moral choice; hence limitation of positivism and defining ethics only by legal standards.

Consider what could appear to be a great act but  futile given its complexity. For example, if you know the regime is very corrupt, then should one resign for making one mistake?

Ultimately, resigning will give a corrupt regime space to hire a worst choice not a more ethical replacement.

I'm not arguing that it is the job of Civil society, I'm bringing this debate as a mirror to show how the rhetoric of Chapter Six and moral transcendence of some selective members are actually weakening Chapter Six through their narrow interest and ethically impoverished claim in the name of enforcing it.

Neither is my discussion about those who are convicted or impeached through legal institutions of having violated Chapter Six.

Finally, I'm aware that there is enough blame to go around on why Chapter Six has remained impotent. For example, the National Assembly passed a very weak legislation that cannot institutionalise enforcement of Chapter Six.

Therefore, in my view, let us empower a political institution to enforce the rule of law including Chapter Six and not rely on the whims of politicians or a dew state agents.

Usually, the price is eternal vigilance and to always assume the government has something under their sleeve and ask what is in it for them?

OJWANG: Handshake was an assault on Constitution

It showed how the informal constitution can be more important than the formal one.
Siasa
3 months ago

Parties in BBI appeal unhappy with time given

The case will be heard for three days
News
5 months ago
WATCH: The latest videos from the Star
by DUNCAN OJWANG
Star Blogs
27 May 2022 - 17:17