VICTOR BWIRE: Road killers in the name of speed bumps

The destruction must stop and the people responsible take over the management of the roads in a professional manner.

•This impunity by those erecting these speed breakers on public roads as well as community footpaths is causing grave economic, cultural, and social costs to the public.

•A speed hump or a speed bump creates the same discomfort for a driver going too quickly whether it is their first or their hundredth time over it. 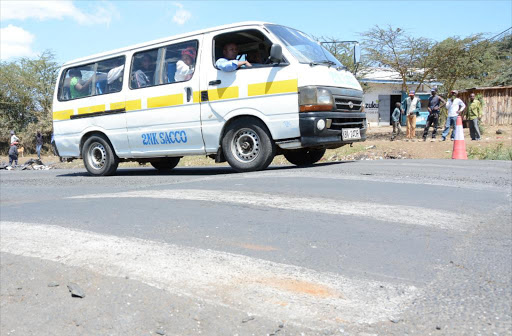 Motorists pass over one of the speed bumps located in Raini center in Naivasha along the Nairobi-Nakuru highway where 42 people lost their lives.
Image: GEORGE MURAGE

I am writing to whom it may concern; because it seems no one wants to take responsibility over the mushrooming, dangerously erected and ill-conceived traffic management structures on our roads and footpaths across the country.

I have two students on hospital wards awaiting medical procedures following accidents related to poorly erected road bumps, and most likely, the students will have permanent disability.

Over the holidays, after nearly seven bad accidents on a road near Bumbe Technical Training Institute in Busia County, where one life was lost, one of the bumps has been removed. The malicious damage to property especially vehicles and riders, injuries and deformities to human and more devastating the loss of lives resulting to these poorly erected and non-marked road bumpers that are supposed to ensure traffic safety and flow is huge, and the fact that authorities are quiet about it is very worrying.

This impunity by those erecting these speed breakers on public roads as well as community footpaths is causing grave economic, cultural, and social costs to the public.  Many times, they are erected at sharp corners or bends or on public roads, where they are highly raised, and made of a mixture of stones, metals, nails, wood, and all associated crude weapons. The concern is that these road bumps done in a very rudimentary manner and aimed at injuring others are erected by anybody anywhere, and authorities seem unbothered.

In a working system, how would members of the public erect bumps on public roads, using items that are classified in the country’s laws are crude weapons, we wait and see loss of lives and destruction of property and damaging of newly constructed roads without any action? Who is responsible for not only supervising our public roads and footpaths or authoring and regulating the erection of road bumps, rumble strips or speed bumbs? These killer structures are common on Busia-Kisumu Road, Busia-Port Victoria Road, and Sio-Busijo- Bumbe- Sisenye road. They are very destructive and maliciously erected. They go against any known benefits of speed bumps, wake calls, sleepy bumps, drunk bumps, or speed breakers as professionally known in traffic management.

Courtesy of online sources, I have read and understood that both speed bumps and humps are useful to encourage safe driving in pedestrian zones. One of the great strengths of speed bumps and humps is that they remain a deterrent no matter how accustomed drivers become to their presence. A speed hump or a speed bump creates the same discomfort for a driver going too quickly whether it is their first or their hundredth time over it. Speed humps are useful in places where traffic needs to flow, and speed bumps in small areas where pedestrians and traffic share space more equally. Professional speed bumps and speed humps are usually made from rubber or asphalt. A bump in the road is not perfect for every traffic calming scenario.

Speed bumps and humps are usually well marked with contrasting colors or reflective surfaces to ensure visibility, but they also need to be installed in places where a driver can see them coming. They are not effective when used in the middle of a long curve, or on streets where the grade is greater than 8%. Speed humps and bumps are also not recommended for arterial or emergency roads, where they can be a hazard.

I was able to note that its purely because of the failure on the part of the officers in public works and the various public agencies in the roads sector that we are seeing the damaging of our roads. The destruction must stop and the people responsible take over the management of the roads in a professional manner.