Kenya’s role and position on global and regional issues especially on security must be branded well.

•Media is a critical player in international relations and diplomacy, by way of sustaining a country’s foreign policy, engagement and influence thus by extension building the clout that is necessary in the community of nations.

•President Uhuru Kenyatta has over the past months done major diplomatic overtures that mean big for the country, but its rarely made an agenda for the media 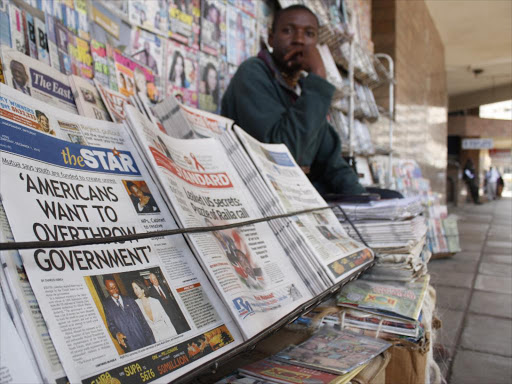 A vendor displays newspapers in a stand in Nairobi
Image: FILE

For the better part of the year, Kenya’s president has been on a diplomatic charm offensive either because of design or nature, all working to place the country at the centre of major global and regional issues.

Kenya has always been a regional hub on a number of fronts because of some relative stability that the country has experienced over the years. Either because of default or deliberately, those dealing with our county foreign relations or government communication as it were appear not deliberate in using the media to amplify the work the leadership of the country is doing on the same.

Media is a critical player in international relations and diplomacy, by way of sustaining a country’s foreign policy, engagement and influence thus by extension building the clout that is necessary in the community of nations.

President Uhuru Kenyatta has over the past months done major diplomatic overtures that mean big for the country, but its rarely made an agenda for the media –save obviously that attempts on online sharing of his appearances are made. The President was in the USA representing Kenya’s chairmanship of the Security Council where he gave a serious futuristic speech relating to global security, terrorists threats and called for enhanced vigilance in the region over security.

Earlier, Kenya’s permanent representative to the United Nations Amb Martin Kimani had raised the emerging threats paused by ISIS in Africa especially in countries facing conflicts where the terrorists were embedding themselves in domestic conflicts. The impact happenings in Afaghanistan where the Tabilans took over has emboldened local terrorist groups among others.

Developments in Somali, Sudan, Ethiopia and other countries is what the president alluded to in his speech. Its unfortunate that as its reported that some terrorists escaped from jails in Kenya, Uganda has been experiencing attacks recently. This is worrying.

The President has made trips to UK during the COP 26 where major announcements relating to climate change were made. He came and immediately visited Ethiopia, which is currently facing domestic turbulence and is hosting the USA Secretary of State, thus placing Kenya at the heart of many developments not only in the region but globally.

I remember in his speech during the regional journalists convention hosted by the Media Council of Kenya in May 2014, the president urged the media to spare time and focus on African issues.

“Our challenge is to tell the African story from our African point of view. This means standing up for and defending African values, and the African experience, giving it expression, giving it a voice, and authenticating it. Kenyan journalists cannot afford and should not write about this country as if they lived on Mars. The time for a robust debate on how the media can contribute to national development, and the evolution of our social values, is now” the President noted.

Can this happen without deliberate and planned engagement between his handlers, government communicators and the media? In the current situation where media begs for information from the Presidency, who many times give briefs at their own convenience or have to get information from countries where the President visited, will media help in placing Kenyan where it belongs in the community of nations? Many Kenyans have won international awards or qualified for senior positions in the global arena, who brands these achievements and how involved is the local media?

Perhaps every broadcaster might wish to provide two minutes to an hour to carry free public service announcements, addressing matters of hygiene in the community, dealing with malaria, or educating the public with respect to our values as outlined in Article 10 of our constitution.

The country must sustain this achievements and involvement in global and regional affairs via strategic communication and engagement with the media. The vital role Kenya is likely to play in regional peace and the responsibility it has already is enormous.

Media is a critical player in diplomacy and international issues, many times, through its nuanced presentation of the critical issues that matter at the global level. The absence of local political bickering over her candidature and a unified approach by the country in the campaigns seems to working well.

Kenya’s role and position on global and regional issues especially on security must be branded well through use of the media, both international media and local as wee, advance Kenya’s interest to play on the global scene

There are lot gains to be made through deliberate media positioning of the country’s foreign policy agenda that is aimed at not only realizing President Uhuru Kenyatta’s Pan African Agenda, which has shown interest in since his first election in 2013, coupled with his recent interest in matters global.

Major global powers use foreign relations and diplomacy as principle strategies to position themselves at vantage points in the economic, political and cultural order. The West, led by the US, and China, appreciate that to push their agenda into the global arena and lobby to place their citizens into powerful strategic regional and global institutions, the must speak to them through the media.

As shown over the years, media is a central player in not only the presenting the substance of such diplomatic endevours, but when focused on such matters can work towards allowing members elect the most suitable candidate. It is time the media in Kenya and the officials running our foreign policy borrowed a leaf from such a strategy and began to sensitise our media on the importance of playing the game of diplomacy for our good as a nation.