Ruto has in the past declared he doesn't need anyone’s endorsement to be president.

• DP Ruto’s response to reports that President Uhuru Kenyatta, during a meeting with Kamba leaders indicated he would support a Nasa leader in the 2022 presidential contest, was scary.

• He has also said that when he formed Jubilee with the President, he did not do so in the hope that he would someday also become president on its ticket. Why the anger then? 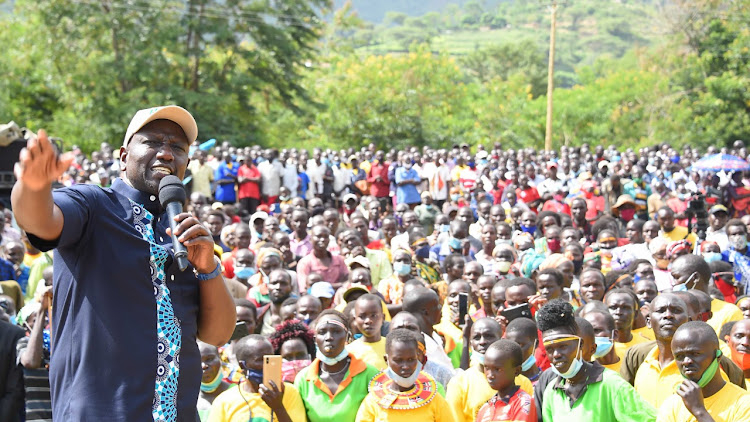 The question of I or me rightly concerns almost every politician if not all.

Politicians want to know how a political or policy shift take their ambitions on board and forward.

At certain levels, however, like that of the Deputy President, the politician who succeeds is the one who is able to recalibrate his or her ambitions and align them to the wider dreams of the nation.

This is why Deputy President William Ruto’s response to reports that President Uhuru Kenyatta, during a meeting with Kamba leaders indicated he would support a Nasa leader in the 2022 presidential contest, was scary.

That bitter response has continued following the announcement that the President’s Jubilee Party is working on a coalition with ODM that will see the two fight together in 2022.

The DP has in the past declared he does not need anyone’s endorsement to be president.

He has also said that when he formed Jubilee with the President, he did not do so in the hope that he would someday also become president on its ticket. Why the anger then?

What was particularly captivating in DP’s rant this past week is what he chose to ignore about the President’s speech to Kamba leaders as reported in the Star.

The same paper from which the DP picked the quarrel over indications that the President would back NASA also reported that the president spoke in some detail on how corruption crippled his government in his first term.

The President is said to have lamented that some people stole public funds and became billionaires overnight and cannot explain how they acquired their wealth. Ruto ignored that corruption bit.

The President was reported to have told the leaders that he has been able to post a more impressive performance in the second term because he dropped the 'thieves' and embraced unity.

The DP ignored that bit about thieves and unity.

The President also spoke of his desire to create a unified front in the political space in which leaders speak of "we instead of me”, create a system in which all Kenyans feel they are part of the government.

That inclusivity bit also didn’t come to the attention of the DP.

Instead, the Deputy President fell back on his characteristic picking of aspects that are sure to create tension and raise emotions while staying clear of the issues that border on accountability.

He ignored national unity talks, the bit about mega scams that rocked Jubilee’s first term and the President’s declaration that he had achieved more in his second term than in the first.

How the DP chooses what to fight over, whether to take a stand or not, should be worrying.

Putting the national above the person is something the DP has never been able to do and probably never shall.

The stability that the president says came with the handshake and enabled him to achieve more is not apparent or important to his deputy because it does not promote his personal ambitions.

From the start, the DP saw the handshake purely as a manoeuvre to edge him out of government.

For the DP, the personal overrides the national, any time. Political moves and policy shifts are good or bad depending on whether they help him advance his career or not.

Over the years, the DP’s prioritisation of the personal over the nation has manifested itself in a you-owe-me syndrome.

The biggest quarrel the DP had with the leadership of ODM before he left the party was the question of “Me and I”.

The DP was never able to accept that Musalia Mudavadi, a weakling in his estimation, was made Deputy Prime Minister in the Grand Coalition Government.

Ruto tried to counter this reality with a claim that in the general elections of 2007, he brought in more votes to ODM on account of total votes from the Rift Valley.

That despite the fact that by the time the DP was embracing ODM, Raila, working with the likes of the late Kipkalya Kones, Henry Kosgei and Sally Kosgei had won over the Rift Valley and the DP was joining him for political survival.

Some Jubilee people cheered the DP as he tormented ODM in the run-up to the 2013 elections.

They accused ODM of frustrating the “best performing minister.” That performance is yet to be seen in his eight years as DP.

But he has taken his entitlement over perceived numbers he brought with him to the Jubilee Party.

As was the case in ODM, the DP feels he deserved more than he got in Jubilee because he is the one who did most of the running around during the Jubilee campaigns who brought the numbers.

How he arrives at the figures he brought, only he knows.

In all his manoeuvres, Ruto’s game plan is not to create some kind of coherent, workable economic and social reconstruction programs.

That is how wheelbarrow economics, and now the so-called bottom-up economics ought to be viewed.

It is not clear whether they mean the same thing or whether wheelbarrows gave way to bottom-up.

Getting clarity from the DP never comes easy, if ever.

While Kenya has had election problems especially at the Presidential level, it has nonetheless produced presidents with a clear stand on critical national issues. That is being tested this time around.

Cornered in the second term, the Deputy President has taken cover in being seen to be defending a Constitution whose promulgation he opposed 10 years ago.

But he will never explain what is so good in the document today that he did not see in 2010.

It does not bother him that he disowned such programs eight years ago with an articulate promise to create a knowledge-based, digital economy.

For the Luo who Ruto once derided as well-known destroyers who uproot railways and homes and break up parties, he is suddenly working on an economic empowerment program.

Why Luo requires an economic program distinct from that of the rest of the nation is baffling. But that is Ruto, thriving on optics, impressions, ambiguity, talk and splintering.

He steered clear of the President’s corruption talk. That he chose not to hear or read about.

He has questioned why Jubilee leaders seeking a coalition with ODM cannot vacate Jubilee House and move to Chungwa House.

According to the DP, coalition partners should operate from one office.

Ruto is essentially a travelling salesman determined to get someone to buy something from him not because it makes the buyer better off but because it benefits the seller.

The travelling salesman is highly unlikely to be coming back via the route he met the buyer.

If the item is useless to the buyer, so bad. For the salesman, it is just another day in salesmanship and financial breakthrough.

It is a very troubling determination to avoid accountability and declare a stand on things that really matter.