Child marriages are among the leading forms of human trafficking in Kenya.

•The report notes that many of the people moving chose their destinations because of better living standards compared to their country of departure, personal freedom, freedom from oppression, and access to better education.

•The study notes that family and friends are critical to decision making before and during the onward migration journey. 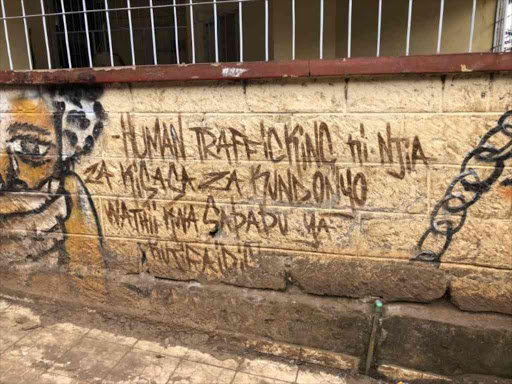 Graffiti shows a girl in chains with a caption 'Human trafficking is the new way of exploiting people for money' in Mathare slum, Nairobi.
Image: REUTERS

Child marriages and trafficking are among the leading forms of human trafficking in Kenya, and whose investigation and convictions remains problematic.

Looking at it, it will require more resources, focus and strategic intervention, to deal with these human rights violations that seems to have taken root.

Even with the enactment of the Sexual Offenses Act 2006 and the Counter Trafficking in Persons Act 2010, to deal with the crime, given existing gaps in implementation and cartels that benefit economically from these criminal activities, enforcement remain a challenge.

The Act was enacted to guide Kenya to domesticate obligations under the United Nations Convention Against Transnational Organized Crime particularly its Protocol to Prevent, Suppress and Punish Trafficking in Persons, Especially Women and Children; to provide for the offences relating to trafficking in persons and for connected purposes.

“It disturbs that even with such laws, but with low awareness and cultural practices, such human rights violations that expose especially women and girls continue in our country. We must find ways of pushing our communities to discard such traditions that seem to stigmatize victims who want to expose the perpetrators, or cases where these violations are normalized in the community thus not seen as crimes or because of lengthy processes through the criminal justice system, victims are encouraged to drop the cases,” Sam Muraya of the Voices for Women and Girls Rights Kenya notes.

Paul Adhoch, Director, Trace Kenya notes that some of the challenges faced in dealing with such crimes of human trafficking and especially relating to women and children include laxity of part of government officers in critical departments such as immigration and children departments.

He also mentions legal demands and threshold on proving such cases like children abuse, cartels behind such crimes hiding under the guise of job recruitment agencies in the face of a very weak capacity of competent authorities such as National Employment Authority as a regulator.

“Additional challenges that we have encountered in successfully prosecuting human trafficking cases include difficulties in maintaining confidentiality of victims in a criminal trial in the Kenyan Court system, compromised state agencies and desperation from the youth supported by a societal expectation that pressurizes them to get income without caring where such monies come from.” Adhoch adds.

The Directorate of Criminal Investigations has established a special anti-human trafficking and child protection unit to deal with this rampant crime, especially at the Coast in Kenya, and with the already mentioned challenges, they are yet to make any conviction as they face challenges with investigations that take rather long.

Millicent Ouko from the Unit notes that dealing with human trafficking, which is a very dangerous transnational crime requires the support of all, and with resources and goodwill, it can be dealt with.

She notes that recruitment especially of women has been on the rise especially with the onset of COVID 19 where recruiters seek victims through the internet, employment agencies, media and well connected local contacts.

“This is a highly organized crime that involves intelligence gathering, infiltrating agencies such as employment and immigration departments and rich and highly connected middlemen who recruit from within the origin countries such as Kenya especially within communities that share similar cultural backgrounds; for example, victims view this as opportunity to move from poor conditions in their homes/countries to move to stable developed countries” Ouko notes.

“But there is commitment and focus to deal with the crime especially at the Coast of Kenya as seen through the creation of the special protection unit,” she adds.

A study released on onward migration trends not necessarily human trafficking by the Mixed Migration Center notes that among the main drivers of onward migration were economic factors violence, general insecurity and lack of rights In line with the drivers.

The report notes that many of the people moving chose their destinations because of better living standards compared to their country of departure, personal freedom, freedom from oppression, and access to better education.

The study notes that family and friends are critical to decision making before and during the onward migration journey.

However, smugglers played an increasingly important role along the migration journey.