• With a single diplomatic masterstroke in Kinshasa, Kenya pulled two key geopolitical levers that will see its influence in the East and Central Africa region expand significantly.

• In essence, Kenya has expanded her geopolitical influence in Africa by tapping into DRC’s vast economic potential and landlocked status. 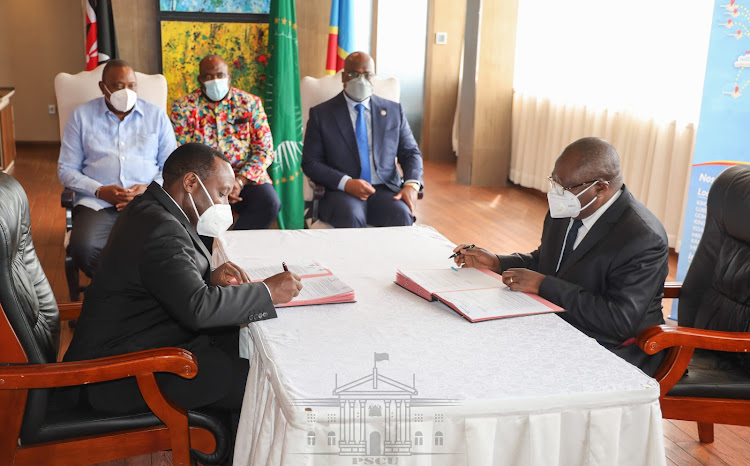 The April visit by President Uhuru Kenyatta to the Democratic Republic of Congo (DRC) may have seemed like just any other foreign visit by the Head of State but is actually one of the most significant moves in Kenya’s recent geopolitical history.

With a single diplomatic masterstroke in Kinshasa, Kenya pulled two key geopolitical levers that will see its influence in the East and Central Africa region expand significantly.

In essence, Kenya has expanded her geopolitical influence in Africa by tapping into DRC’s vast economic potential and landlocked status.

First, some important facts about DRC. According to the Africa Report Magazine, the Democratic Republic of the Congo is the size of Western Europe and has natural resources with an estimated value of $24 trillion, larger than the United States GDP valued at $20 trillion.

The central African nation exports minerals worth $11 billion but has a GDP of $50 billion, lower than one would expect.

Unfortunately, with all its wealth and economic potential, DRC, being landlocked, has faced myriad challenges including insecurity in some segments of the vast country.

It has had to rely on neighbouring countries to exports its goods. Studies by the South African think tank IOA show that landlocked countries like DRC have “perpetual disadvantage” that contributes to poor economic, social and political performance.

IOA further argues that African integration aimed at opening up borders and allowing free movement of goods and people will accelerate the development of landlocked nations.

Kenya and DRC are linked by the Northern Corridor, the main trading corridor in the greater East and Central African region.

It connects the Mombasa Port in Kenya to Uganda, Rwanda, Burundi into eastern DRC in Goma, Bukavu, Beni, Bunia and Kisangani.

However, from the trade viewpoint, Mombasa serves as a more important gateway for countries like DRC than other ports.

Thus, the Northern Corridor and specifically the Port of Mombasa constitutes an important geopolitical advantage for Kenya in the region.

By signing a revitalized agreement on maritime freight to reposition Mombasa as the main gateway port for DRC, Kenya essentially pulled the first key geopolitical lever that will increase its economic power in the wider East and Central Africa region.

This means Kenyan and DRC economies will become more inter-linked opening up trade opportunities for businesses in both countries. Given the strategic importance of the Northern Corridor to transport and logistics, Kenyan businesses and traders can now expand into Central Africa.

This deal signals the huge pent up demand for new opportunities among Kenyan businesses seeking to expand their tentacles into the region.

Also, by setting up diplomatic posts in Goma and Lubumbashi, Kenya will be in a better position to advance her commercial, political, cultural and economic interests in the greater East and Central Africa region.

With DRC planning to go ahead with the long-stalled Grand Inga Dam, which when complete will be Africa’s largest hydropower plant, producing 40,000 megawatts of power, there is certain to be a wave of foreign investment in coming years.

With Kenya strategically positioned in DRC, the economic benefits to the country and Kenyan business are potentially immense.

An interesting dynamic underpinning the second geopolitical lever is the perennial instability in DRC.

Being a landlocked country, militants and other armed groups find it easier to cross borders on land as opposed to the sea which presents certain logistical challenges.

Several militia groups that have sprouted in the central African region have found a haven in Eastern DRC thus fueling war, instability and insecurity.

By signing defence and security pacts with DRC, Kenya pulled a second geopolitical lever that it has honed over the last decade of its involvement in war-torn Somalia fighting Al-Shabaab.

Personnel from the Kenya Defence Forces will be deployed to eastern DRC as a rapid intervention force to counter militias operating in that part of the country but under the auspices of the United Nations Organization Stabilization Mission in the Democratic Republic of the Congo (MONUSCO).

The entry of KDF into the complex military equation with several players in eastern DRC is significant as it opens a second front eastward for Kenya’s military influence to be felt in the region while building stronger ties between Nairobi and Kinshasa.

Apart from defence, Kenya and DRC signed bilateral frameworks on security covering counter-terrorism, immigration, cybersecurity, customs and border control. Each of these security elements is crucial from a geopolitical perspective.

For instance, the growing threat from Islamist terrorists in the region is attracting international attention. Already, two armed groups operating in Mozambique (Ahlu Sunna Wal Jamaah) and DRC (Allied Democratic Forces) both affiliated to the Islamic State have been designated terrorist organisations by the US. Incidentally, ASWJ is known locally in Mozambique as Al Shabaab.

A joint counterterrorism strategy between DRC and Kenya will be a major boost for Kenya’s war on terrorism by giving it a geopolitical context considering the cross-border nature of the threat.

Tighter customs and border control is good for controlling illicit trade including the smuggling of gold and other minerals.

In a nutshell, the immense benefits out of the state visit by President Kenyatta to the DRC will be felt in both countries in the years to come.

For Kenya, this is yet another positive milestone in its reinvigorated geopolitical posture that has seen her play an increasingly influential role on the Africa continent.

Post a comment
WATCH: The latest videos from the Star
by PETER WAFULA MURUMBA
Star Blogs
27 May 2021 - 11:06
Read The E-Paper