China’s BRI: Entangled in the Myanmar conundrum and more

• In the current streak of violence, so far, 37 China-funded factories have been burnt down with protestors risking their lives against Burmese military action to set fire to these factories.

• Worse, in the backdrop of the current anti-China wave, Beijing, seen as the main backer of the military junta, is having to bargain for something it barely anticipated. 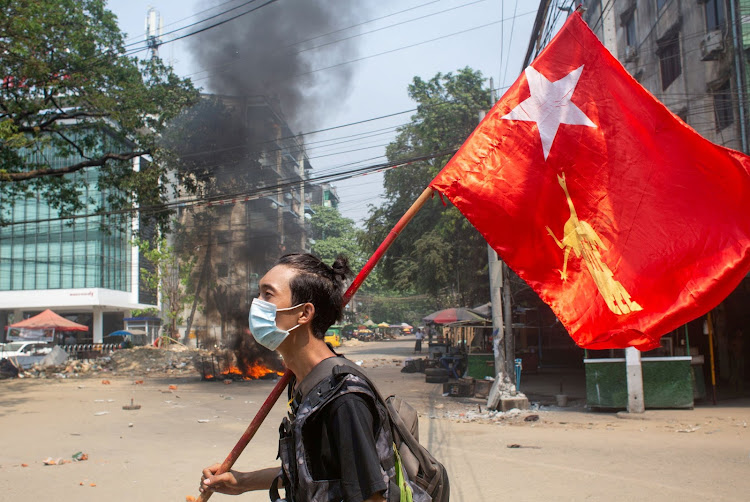 A man holds a National League for Democracy (NLD) flag during a protest against the military coup, in Yangon, Myanmar March 27, 2021.
Image: REUTERS

In a startling turn of events, with the military junta lashing out violently at the protesters of the Myanmar coup, China’s dream project, the BRI seems to be stuck in the very neighbourhood it once prominently began.

Beijing which for long considered Myanmar its backyard, is now battling not just economic losses but also facing a crisis regarding its image and presence in that country.

Pro-democracy protestors, mowed down by military gunfire on the streets of Myanmar’s towns, are turning to Chinese-financed factories and businesses, setting them on fire and even attacking managers and workers.

The protestors who want the restoration of the parliamentary democracy in the country and a scaling down of the military’s influence, feel attacking Chinese business interests will force Beijing to pressurize the Burmese military to back down, hand back power to the elected law-makers and allow Nobel Laureate Aung Saan Suu Kyi to form a government a second time.

Basically, the protestors see China as the main backer of the military junta that seized power on Feb 1 and believe attacking Chinese business interests will propagate their message of resistance.

To many, the current wave of anti-Chinese violence is reminiscent of the one that swept across Myanmar in 1967-68 when the Ne Win led military regime, resenting Chinese backing for a Communist insurrection, provoked public anger against Chinese business interests.

Twenty years later however, China regained the trust of the Burmese military Tatmadaw by backing its ruthless suppression of the 1988 uprising and ended up turning Myanmar into a satellite or so it would have thought.

In the current streak of violence, so far, thirty seven (37) China-funded factories have been burnt down with protestors risking their lives against Burmese military action to set fire to these factories.

Chinese businessmen are complaining of huge difficulties in doing business from sourcing jade in the Mandalay wholesale market to running the Lepetdaung copper project.

Interestingly, the Chinese joint ventures are mostly with Burmese backed companies – so hitting one impacts the other.

Protestors are also threatening to blow up the Kyaukphyu-Yunnan oil gas pipeline linking a China-financed deep-sea port on Myanmar’s Rakhine coast to its Yunnan province.

If the military repression does not stop and the peaceful protestors turn violent leading to the emergence of armed urban insurgency in the Burmese heartland, terror attacks on key China-funded infrastructure is a distinct possibility.

As such, threats to the Chinese projects in Myanmar are not new.

The first jolt to its ambitions came sometime in 2008-09 when Kachin tribesmen successfully opposed the $6bn Myitsone hydel project, triggering a furious reaction by Burmese civil society and democratic parties.

Aided by the global human rights and anti-big dam environmentalist groups, the Burmese people finally forced the quasi-military regime of General Thein Sein to stop the China-funded project. A decade later, despite intense lobbying, Beijing is nowhere near resumption of the mega project.

Worse, in the backdrop of the current anti China wave, Beijing, seen as the main backer of the military junta, is having to bargain for something it barely anticipated.

Essentially, the Chinese were upset with the Suu Kyi government because it not only refused to resume the Myitsone Dam project but also cut down the investment size of the Kyaukphyu deep seaport project and drafted in other foreign partners for the Yangon city Megaproject in July last year, refusing to hand over the monopoly of executing the project to the China Communication and Construction Company.

This Chinese firm was accused of corruption in as many as 10 Asian and African countries where it is undertaking infrastructure development projects.

But it is not just the China-Myanmar Economic Corridor, as part of China’s BRI efforts that is under trouble; even the other key BRI growth corridor in the South Asian neighbourhood, i.e. the China Pakistan Economic Corridor (CPEC) has its own share of challenges and concerns.

Currently, the CPEC is under attack with a surge of deadly assaults by Baloch separatists who resent the exploitation of their mineral and hydrocarbon resources by Chinese companies who arm-twist the Imran Khan government into granting huge concessions.

The USD60 billion ChinaPakistan Economic Corridor (CPEC) is already reeling under rising costs and security concerns amid a resurgence of violent attacks by separatists in the troubled Baluchistan province, the most recent one being the blast at a hotel in Quetta where the Chinese envoy was staying.

Apart from Baluchistan, the Shias of Gilgit and Baltistan, the area from where the CPEC actually begins, are also upset with the Chinese and their high handedness in behavior.

Against this backdrop, one notices that across the world, scores of Chinafunded massive infrastructure projects have either been cancelled or put on hold, such as in countries like Indonesia, Malaysia and Philippines etc.

In fact, in South Asia, Bangladesh torpedoed the Chinese deep seaport project at Sonadia and handed over a similar project to Japan on its southern coast.

In Sri Lanka, the long leasing of the Hambantota port to China after the government realized its inability to service the unsustainable debt, has created not only angst against Beijing and its friends in the island nation but also sent out a global alarm on driving up the project scale and then bargaining for outright long-term control over national assets – the famously infamous ‘Chinese debt trap’ that many scholars have referred and described in great detail as a recurring phenomenon that countries must be wary of.

Thus, there seems to be a dawning realization that China while being the global tormentor for its handling of the Covid pandemic, is also increasingly becoming the world’s leading `neo-colonial power, hungry for resources and determined to extract them, irrespective and unmindful of the adverse impact on countries and their population.

As a Newtonian law, while every action has an equal and potent reaction, China for all its emphasis on concentrating power through economic gains and diplomatic maneuvering is facing the wrath of the people and the citizens who constitute the very nations that it wishes to dominate.