If fully tapped, our maritime resources could easily rival the tourism sector.

• Maritime resources are crucial to the realisation of Kenya’s Vision 2030 and Blue Economy agenda and could significantly transform the livelihoods of coastal communities.

• One promising but the neglected area is mariculture – the commercial farming of marine organisms for food and food additives, pharmaceuticals, jewellery and cosmetics. 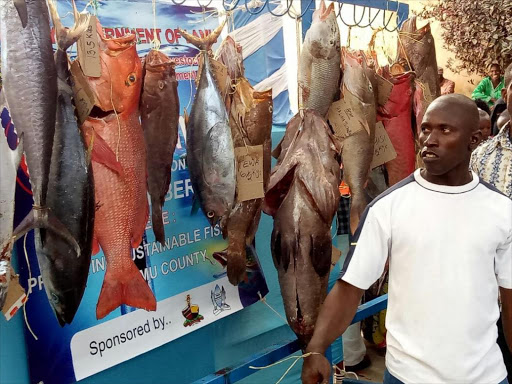 Fish on display during a past Lamu fishing competition.
Image: PRAXIDES CHETI

Kenya has a 640-kilometre coastline but her coastal and marine resources remain highly under-utilised.

Data from the Kenya Marine and Fisheries Research Institute (KEMFRI) shows that marine resources account for a paltry three per cent of fish landings, compared to 95 per cent from inland sources.

With all bays and inlets included, Kenya’s coastline extends 880 kilometres, greater than the distance from Nairobi to Moyale.

This is just a pointer to the massive economic potential of this vast natural resource.

If fully tapped, our maritime resources could easily rival the tourism sector in economic value.

Maritime resources are crucial to the realisation of Kenya’s Vision 2030 and Blue Economy agenda and could significantly transform the livelihoods of coastal communities.

One promising but neglected area is mariculture – the commercial farming of marine organisms for food and food additives, pharmaceuticals, jewellery and cosmetics.

It is a special type of aquaculture carried out in a marine environment.

Mariculture is a fast-growing industry valued at over $63 billion globally as of 2013.

Currently, Kenya boasts a marine aquarium fishery industry valued at Sh100-200 million and producing mostly fish, shrimps, clams and soft coral. With the local Blue Economy potential pegged at over Sh400 billion, we are only scratching the surface.

A possible approach is the development of mariculture parks.

These are akin to industrial parks complete with support infrastructures like fish landing sites, transport, processing and marketing.

Mariculture parks are a relatively developed concept in the Asia-Pacific region in countries like China, South Korea, Japan, the Philippines, Japan and Vietnam.

This has seen such nations reap enormous benefits like increased food production and fish exports, advanced fisheries research as well as environmental conservation by easing pressure on local marine resources.

There is also scope for small-scale marine fish farming and value addition in cosmetic, pharmaceutical and ornament manufacture.

But investors in mariculture need a safe and secure environment with minimal threat from illegal fishing, a menace that reportedly costs the local marine fisheries industry over Sh10 billion annually.

Fortunately, the Kenya Coast Guard Service was established to combat illegal fishing among other threats.

This will encourage more Kenyans, especially youth and the local communities, to venture into mariculture, with the State playing a facilitative role through policy, research and infrastructure.

In particular, the coastal counties should take the lead in promoting mariculture.

They should create the right policy and fiscal environment for marine fisheries to flourish.

Several national government interventions in collaboration with development partners have set the pace for mariculture to thrive locally.

The project should be expanded to include incubation of mariculture parks targeting Small and Medium Enterprises (SMEs).

Climate change, however, remains a major threat to mariculture.

Luckily, the international community has mobilised urgent action to combat climate change through the Paris Agreement to which Kenya is a party. Protecting marine ecosystems is key.

Since mariculture involves rearing fish and other organisms in a controlled environment, unlike traditional fishing, this helps in the preservation and restoration of the marine environment.

In nutshell, mariculture is capable of leapfrogging the coastal economy, which is heavily dependent on tourism and providing sustainable livelihoods for local communities.

Mr Choto is a lawyer and policy analyst. [email protected]