Don't give guards to every candidate

• Another 2,000 candidates for MP, senator, MCA and governor have asked the police for bodyguards 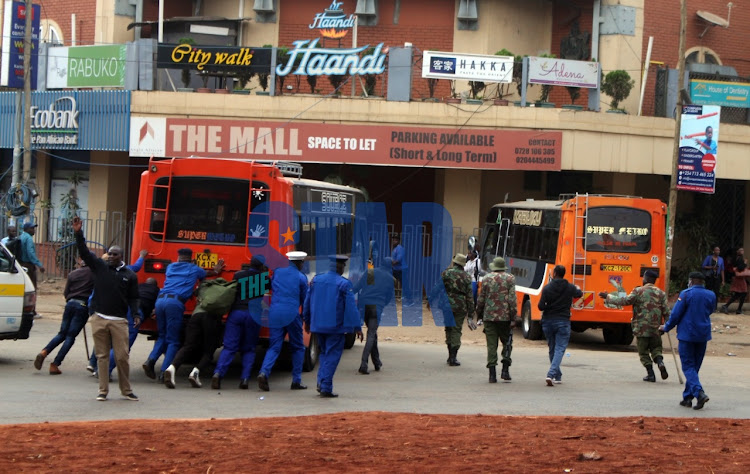 Police officers push a bus out of the road after matatu operators using Waiyaki Way blocked Westlands round about demanding to be allocated a stage in Westlands on Thursday May 19, 2022.
Image: Andrew Kasuku

Presidential candidates are to get at least 10 bodyguards to guard them at home, office, and while they are on the move. So far at least five candidates have been cleared to stand by the IEBC.

This might seem excessive but there would be a very high cost if anything was to happen to a candidate, or indeed to a running mate. The presidential election would have to be postponed for three months. We cannot afford that to happen so presidential candidates need these guards.

But that is not true of candidates for MP, senator, MCA or even governor. Reportedly 2,000 candidates have already requested police protection before the August 9 election (see P10).

Already 10,000 officers out of the 100,000-strong police force are deployed to protect politicians and members of the elite. The police just does not have the capacity to provide guards to all these 2,000 candidates, whether they are men or women, rich or powerful, known or unknown.

So rather than taking on the impossible task of trying to choose which candidates merit protection, the police should just decide to protect no candidates at all before August 9, except those standing for president.

Quote of the day: "A computer would deserve to be called intelligent if it could deceive a human into believing that it was human."

Presidential candidates to get at least ten body guards

Two officers will man their city and rural homes together with their running mates on a 24-hour basis
News
3 weeks ago
“WATCH: The latest videos from the Star”
by STAR EDITOR Editorial
Leader
07 June 2022 - 04:00