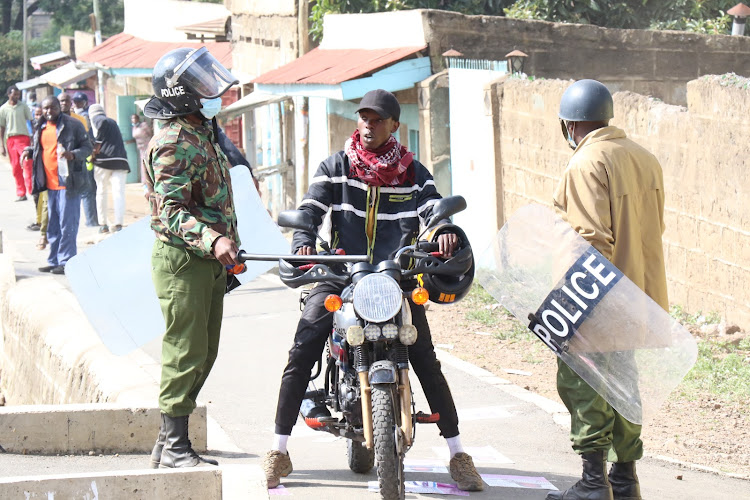 CONFRONTATION: Riot police stop a boda boda rider after fighting broke out during the London by- election on Thursday.
Image: BEN NDONGA

Kabuchai and Matungu constituencies in Bungoma and Kakamega counties and several wards went to the polls on Thursday to fill the vacuum occasioned by the death or resignation of the occupants.

Representation is important and brings to memory the political slogan "no taxes without representation" during the American Revolution by the colonists against Great Britain.

Voters must be able to exercise this key democratic right in a free and fair atmosphere to get a true representative of their choice.

However what was witnessed in Kabuchai, Matungu and the various wards turned out to be a "flee and flare" event.

The intolerance and deep hatred between the so-called dynasty and hustler camps do not portend well for 2022.

The same occurrences being witnessed now characterised the run-up to the 2007 contest between the incumbent Mwai Kibaki and his main challenger Raila Odinga.

It went on unhindered and the anger and incitement exploded into what became the post-election violence.

Short of international intervention led by the late Kofi Annan, Kenya would have joined the league of banana republics.

Our leaders however seem not to have learnt any lesson from this and have been consistently beating the drums of war.

Leaders have always let down Kenyans, and it is time the public totally refused to be used as pawns in political battles. Short of this, we are marching headlong into a crisis in 2022.

Quote of the Day: "Light tomorrow with today."

Four Tangatanga MPs to be charged in Bungoma