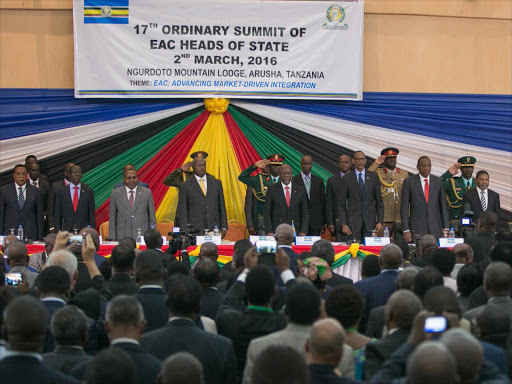 President Uhuru Kenyatta and other heads of state from the East African Community at the 17th Ordinary EAC Summit in Arusha, Tanzania
Image: PSCU

Kenya is pushing on with a trade partnership with the United Kingdom despite concerns raised by other members of the East African Community.

The Economic Partnership Agreement between the two countries comes at a time when the EAC member states are yet to roll out all the protocols contained in the Single Customs Union.

Kenya is also solely engaging with the US for a preferential trade agreement.

The EPA seeks duty-free access to the UK market, but this is being done without the consensus of other EAC partners, which already have existing trade agreements such as the Common External Tariff for goods coming from outside and within the region.

The UK deal will however accord concessions to goods from the UK, thus negating the Common External Tariff.

EAC member states are concerned that by going it alone, Kenya shows that it is not committed to regional integration. The same concern has been raised by the UK House of Lords.

Latest trade data from the Kenya National Bureau of Statistics show that the two countries were key in the growth of Kenya's export volumes in 2020 at a time when the Covid-19 pandemic greatly affected international trade.

Charity begins at home and Kenya must grow and strengthen its trade ties within the region before reaching out to international partners.

Lone ranger tactics disadvantage the EAC as a trading bloc and the region should borrow from the European Union, which collectively negotiates any trade deals.

Quote of the Day: “Seriously bad ideas (are) bad ideas which appeal to the prejudices of serious people.”

The American economist and New York Times columnist (Nobel Prize in Economics 2008) was born on February 28, 1953.

•The trade deal was initially meant to be concluded between the UK and the EAC •Lack of political will forced  Kenya to adopted a go-it-alone ...
Business
5 months ago

Kenya has committed to progressively liberalize 82.6 per cent of its trade with the UK over a period of 25 years.
Business
1 month ago
by STAR EDITOR Editorial
Leader
28 February 2021 - 04:00