• Somalia believes that Kenya has territorial ambitions in the state of Jubaland on the border.

• Pressure for a unitary Somali state including North-East Kenya was behind the shifta wars in the 1960s. 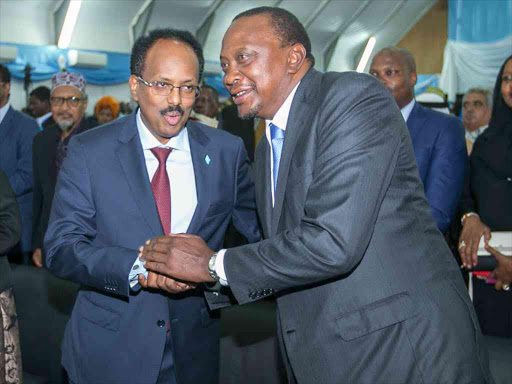 Eight Northeastern MPs were briefly arrested at JKIA on their return from Mogadishu on Sunday. Their crime? They met the Somali President Mohamed Farmajo for dinner and they did not inform the Speaker of Parliament that they were travelling.

Temperatures are running high. Yesterday shots were reportedly exchanged between the Somali National Army and the forces of President of Ahmed Madobe just inside the border near Mandera. Mogadishu believes that Kenya is backing Madobe.

The Northern Frontier District, essentially Wajir, Mandera and Garissa, was carved out of southern Somalia by the British in the 1920s.

There was pressure for a unitary Somali state before and after Kenya's independence in 1963. That was the genesis of the shifta wars in the 1960s.

Then came the KDF incursion into Somalia in 2011 after al Shabaab kidnapped foreign tourists in Lamu. Many Somalis interpreted that legitimate intervention as territorial aggression on Jubaland.

The maritime dispute at the ICJ has inflamed matters further.

This little history lesson warns us it would be easy to slip into open hostilities. We must pursue diplomatic means to settle these disputes. Neither Kenya nor Somalia benefits from them.

Quote of the day: "We are the only party that takes on White Monopoly Capitalists and its representatives."

Julius Malema
The South African leader of the EFF was born on March 3, 1981.