It is too late in the day to sway voters with debates, especially when people already know what their candidates stand for.

• The debates are expected to help audiences see what the candidates stand for. However, they can also turn into showbiz as has happened before. 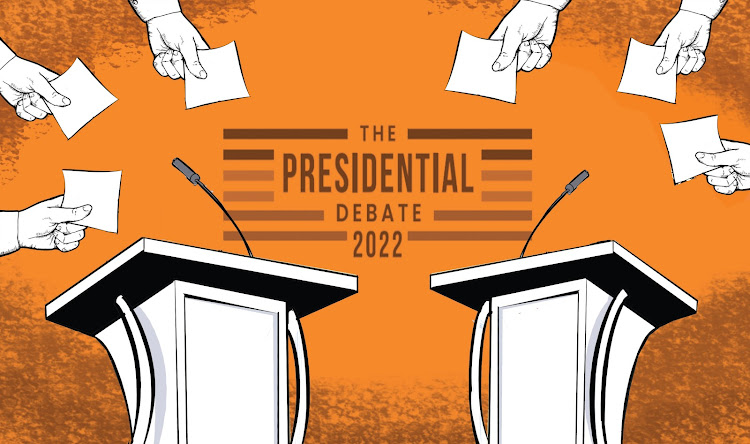 An Ass once found a Lion’s skin that the hunters had left out in the sun to dry. He put it on and went towards his native village. All fled at his approach, both men and animals, and he was a proud Ass that day.

In his delight, he lifted up his voice and brayed. So everyone knew him, and his owner came up and gave him a sound cudgeling for the fright he had caused. And shortly afterwards a Fox came up to him and said: “I knew you by your voice.”

One of the most famous debates in history was in 1960 between John F Kennedy and Richard Nixon. The debate, which was televised live for the first time, had voters believing that Kennedy performed better on TV due to the makeup worn, while radio listeners believed Nixon performed better.

Although many other factors were at play and Kennedy ended up winning the election, there is still a debate as to if the debates had any impact on the outcome of the election. Since then, debates have become normalised as part of the election process.

On Tuesday, we will have the first deputy presidential debate, and the presidential debate will be on July 26. The debates are expected to help audiences see what the candidates stand for. However, they can also turn into showbiz as has happened before.

In 2017, President Uhuru Kenyatta skipped the presidential debate that Nasa’s Raila Odinga attended and despite skipping, Uhuru went on to win the election. Kalonzo Musyoka and William Ruto also skipped the running mates debate, despite being the top contenders.

Skipping debates is not a new phenomenon whether locally or elsewhere. This year, GOP candidates for governor in North Carolina, Ohio, Nevada and Nebraska have also refused to debate their opponents.

There are other states in the US where candidates, especially Republicans, have refused to take part in the debates.

From comments made by the Kenya Kwanza team last week, we will have to wait until the debates start to see if Rigathi Gachagua and William Ruto will turn up. Their teams have raised concern with what they see as unfair treatment of their candidates by the media, which is organising the debates.

In my opinion, with the elections being less than three weeks to go, most voters have already made a decision — consciously or unconsciously — about whom they are going to vote for. It is too late in the day to sway voters with debates, especially when people already know what their candidates stand for.

The debate becomes a platform for decided voters, the same way as in a football match, to cheer on their sides and show why their team is better than the other team. Debates rarely make people change their minds, even though they help voters see if their favourite candidates have a grasp of the issues affecting them.

For debates to have any meaningful impact, we must have a society that only votes based on issues, and the candidates with the most progressive policies taking the day. However, our democratic practices are yet to reach a level where people move away from slogans and interests to issues.

Surprisingly, George Wajackoyah’s supporters seem to like him because of his policies on cannabis, so this could be the only exception. It will be interesting to see if he can actually articulate these issues properly in a debate, especially with many people already widely fact-checking his claims.

Issue-based politics will create the need for debates in our society in the future. But for this election, we have already moved far into the process based on slogans and ethnic blocs that debates on issues could have a little impact today and next week.

While debates are a good tradition that we are adopting, they are not likely to change anything because similarly to the donkey in a lion’s skin, we already know who the candidates are and have taken a stand on what we believe they stand for.

The writer is a political and communications consultant.

How you can participate in Deputy Presidential debate

The debate between Mr Gachagua and Ms Karua might help provide clarity.
News
1 month ago

Hussein Mohamed: Ruto, Gachagua to decide if they will attend debates

The presidential debate is scheduled for July 26 and their deputies' July 19.
News
1 month ago

The four candidates will feature in a debate on Tuesday, July 19 from 5pm.
News
1 month ago
by MACHEL WAIKENDA Political and Communications Consultant
Columnists
19 July 2022 - 05:00