Fix the root cause of wildfires

The converse will be a waste of time, taxpayer’s money, and well-wishers’ resources. 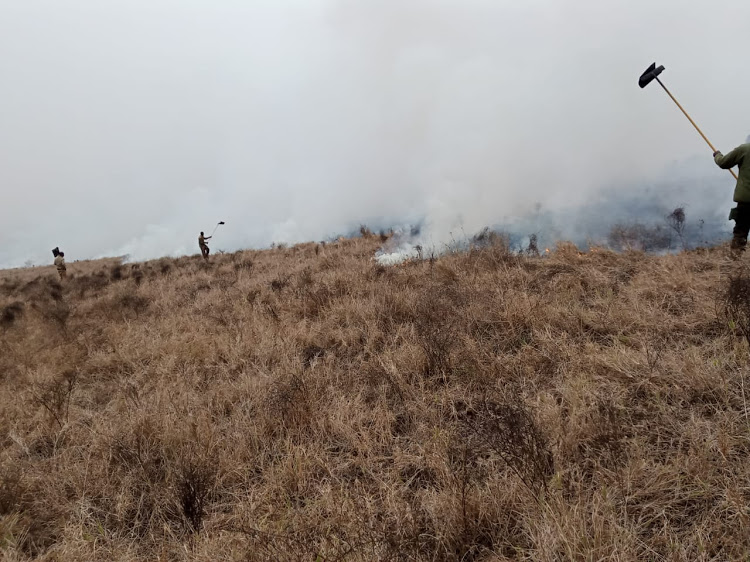 Wildfires are not a new phenomenon, both in developing and developed countries. They occur naturally or are caused by human actions. The occurrence of wildfires can be reduced if proper structures are put in place and if rules and regulations governing access to and use of protected areas are well enforced.

Tsavo National Park is the latest wildfire victim this year: Twice. The park is vast and mainly characterised by short grasses, thorny bushes and baobab trees. It is home to numerous animal species, including the big five. In 2019, raging fires destroyed parts of Mt Kenya National Park, a key water catchment area. Approximately 80,000 hectares (197,684 acres) of moorland was destroyed.

The park hosts the highest mountain in Kenya, an exceptional feature that boosts the country’s natural richness. The park is home to many animal species, including the tree hyrax and elephants.

As a result, it is prudent to establish the root cause of fires to develop strategies to avert their occurrences and lower the magnitude of damage.

In a press release on August 9, Kenya Wildlife Service said it suspected arsonists started the Tsavo fire early this month. KWS should be establishing their motives.

It is vital to dutifully implement existing and new policies governing protected areas without fear or favour. If the defined fines and arrests are enforced without leniency, illegal herding in parks will end.

Knowing who or what caused the fires is an opportunity to fix the problem from the root. This requires a bottom-up approach; the converse would be a waste of time, taxpayer’s money, and well-wishers’ resources. It would amount to a temporary, ineffective solution.

Having witnessed the massive devastation of the 2019-20 bushfires in Australia, no individual or country that values nature would want to encounter such. Nearly 3 billion animals were killed or displaced. Vegetation was devastated. The images were graphic. Other countries sent firefighters and equipment to help put out the fires.

Stopping forest fires calls for a multi-stakeholder task force to establish the leading causes, where natural ones are ruled out. The communities living around the parks, for example, should be the primary target to understand whether their activities trigger the fires. Illegal herders could be responsible for fires. Slash-and-burn agriculture could spread fires into protected areas. Often, campers have been accused of recklessness.

It is vital to dutifully implement existing and new policies governing protected areas without fear or favour. If the defined fines and arrests are enforced without leniency, illegal herding in parks will end.

Restricting camping areas and activities close to and inside forests and parks should be one of the main strategies. Establishing buffer zones around the protected areas will keep away illegal herders, loggers, and fires from slash-and-burn agriculture. The communities around the protected zones are crucial. Their needs, involvement, and empowerment in conservation should be highly regarded. Corruption and political pressure, often overlooked in conservation, should be addressed.

Wildfires are regular events; they will not stop if nothing is done. Thus, fixing the primary agents is essential.

About 3 per cent of the Tsavo National Park has been wiped out by the fierce fires.
Counties
2 years ago