Habitat for Humanity’s project offers shelter solutions for the poor 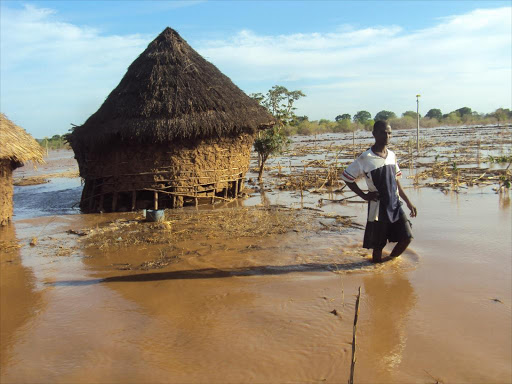 A flood victim walks out of his residential home in Magarini. /FILE

Upon taking the oath of office President Uhuru Kenyatta committed to building 500,000 houses in his second and last term in office.

He promised to facilitate affordable housing and home ownership programme that would ensure working families can afford a decent home.

President Kenyatta said, “We shall facilitate policy and administrative reforms targeted at lowering the cost of construction and improving accessibility of affordable mortgages.”

This occasion coincided with the unveiling of Habitat for Humanity project report aptly titled 'Building Assets, Unlocking Access: Shelter Solutions for the Poor'. The project, started in 2012, is well in synchrony with the 11th Sustainable Development Goal, which seeks to have sustainable cities and communities.

The report notes that housing deficit – paired with the shortage of affordable financing for housing – is acute in sub-Saharan Africa. In Kenya, for instance, there is a backlog of 1.85 million houses, and in Uganda the backlog is 1.3 million units.

The methodological approach used by Habitat’s Terwilliger Center involves a comprehensive housing market systems assessment and market research study, followed by the design of housing microfinance product prototypes, aligned to the needs, preferences and capacities of both the clients and the institutions.

The report observes that banks generally reject or ignore the financing of low-cost shelter, as the perceived risks and costs outweigh benefits. This problem is further accentuated by ambiguous property rights and legal precedents that constrain conventional ways of financing shelter. Thus, mortgage markets in the region remain small, providing access to only a small elite segment of the population.

The Habitat for Humanity project has scaled huge milestones. As of June 30, 2017, more than 42,000 low-income customers had accessed housing microfinance loans and more than $33 million mobilised in capital for such loans, resulting in a direct impact on at least 210,000 individuals. The project’s initial goal was to reach 17,000 households.

The story of Jane from Mwanza, Machakos county, Risper from Uriri and Pamela from Awendo, Migori county, best illustrates this transformation. The three women are among the 42,000 beneficiaries who manifest how the project has helped unlock access to low-income households. They are now proud owners of their own low-cost houses courtesy of Nyumba Smart Loan by KWFT. A similar facility, CenteHome, by Centenary Bank has dispatched low-cost house financing to tens of thousands beneficiaries in Uganda.

In Africa, as in other continents, a house, apart from being one of the most important assets a family can acquire, is considered a conduit of hospitality and a lens to social standing. It has been linked to positive changes in health, education, safety, economic opportunities, social status, and even one’s sense of happiness.