Wajir Women Have A Crucial Role In The Quest For Peace 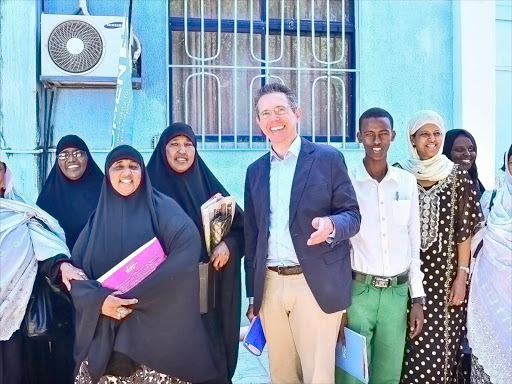 When we decided to visit Wajir earlier this month we did so because the women of this county have shown the entire world how the cause of gender equality can be advanced even in very harsh circumstances. Having said that, major challenges still remain.

The year 2015 was crucial for the enhancement of the Women, Peace and Security agenda, marking the 15th anniversary of United Nations Security Council Resolution (UNSCR) 1325, which acknowledges the inordinate impact of war on women. It also emphasizes women as proactive agents for transformative change and sustainable peace and demonstrates why their role in conflict management, conflict resolution and peace-building has to be secured.

Last year, the Security Council convened a high level review of UNSCR 1325 and presented a comprehensive compilation of growing evidence that women’s empowerment is fundamental to the achievement of sustainable peace. Ultimately, it is about accelerating economic recovery, strengthen peace support operations, improve humanitarian assistance and help preventing and countering violent extremism.

Sadly, in many countries, alarmingly little has changed on the ground in terms of women’s engagement in peace talks, protection from sexual and gender-based violence during and after conflict, or engagement in relief and recovery.

However, Wajir is an interesting example of women’s involvement in the quest for peace, long before UNSCR 1325. In 1992, the late Dekha Ibrahim (a Right Livelihood Award winner) and other women as well as concerned men started a grassroots peace initiative, drawing inspiration from the traditional dispute resolution mechanisms. This group became the Wajir Peace and Development Committee that brought together traditional leaders, government security officers, parliamentarians, civil servants, Muslim and Christian religious leaders as well as civil society organizations. This committee was the genesis of the District Peace Committees, which has been replicated in the country by the government as the national peace architecture.

The Wajir experience has been showcased globally as a best practice when it comes to community lead peace initiatives. Nevertheless, since the days of Dekha Ibrahim some people argue that the women of Wajir have been pushed back into a space of marginalization when it comes to decision making. What is more, the population of Wajir is still experiencing different kinds of security threats and women and girls keep suffering disproportionately from the consequences of conflict.

Let alone inter-clan conflict and the terrorist threat facing Wajir County; for many women the quest for peace starts in the homes. The recent case in Wajir where a woman was stabbed in the face by her husband is just another reminder of the urgency of engaging women and men at all societal levels in conversations around women’s rights to security. According to Kenya National Demographic Health Survey 2014, 40 per cent of ever married women in Kenya (compared to 10 per cent of ever married men) have experienced physical and, or sexual domestic violence. It has been said before but cannot be emphasized enough; a society where women on a large and frequent scale are threatened, raped, defiled, and even killed, often by close family members, is not a society at peace.

Wajir has been known for its application of the Alternative Dispute Resolution (Maslaha) as a legal way of settling disputes, including cases of sexual and gender-based violence.

As much as this system might be helpful as a complement to conventional courts, women that we talked to in Wajir now ask themselves whether the Maslaha model can truly bring justice to the female victims of GBV. They stressed that an ad-hoc justice system that excludes women from decision making risks accentuating women’s vulnerability and ultimately contribute to further victimization of the female half of the population.

In Wajir we held discussions on how to take stock of past successes and move the peace agenda forward in the county so that the women, men and children in Wajir and other counties live in sustainable peace and social cohesion. We were encouraged by the active and committed participation of Governor Ahmed Abdullahi Mohamed in prompting gender equality and women’s participation in Wajir county.

So what is the way forward? The Wajir county government has shown its commitment to a sustainable peace through the establishment of the Wajir County Peace Directorate. Coupled with the work of the District Peace Committees and civil society organizations this initiative lays the foundation for a constructive peace architecture. However, the successful involvement of women is crucial for an inclusive and a sustainable outcome.

At the national level, UNSCR 1325 is operationalized through the Kenya National Action Plan whose theme is “Kuhusisha wanawake ni kudumisha amani” (To involve women is to sustain peace). The Action Plan recognizes that the inclusion of women and gender perspectives in decision-making strengthens the prospects for achieving sustainable peace. We acknowledge the Government’s commitment on implementing UNSCR 1325 with the upcoming launch of the Action Plan, which comprehensively addresses the four main pillars of the UN resolution: participation, prevention, protection, and relief and recovery. We will continue to support National and County Governments in the work towards an equal society. The future of Kenya depends on its success; sustainable development is not possible if half of the population is excluded from real political influence.

In 2014 Sweden became the first country in the world to adopt an explicitly feminist foreign policy. Strong Swedish political and financial support of UN Women, to reinforce the organization’s push for gender equality and the empowerment of women will continue.